Saudi Arabia: Lynchpin of the moderate axis in the Middle East

The Saudis consider Israel a possible partner in the struggle against Iran and the jihadist groups, as long as this partnership is kept behind closed doors. 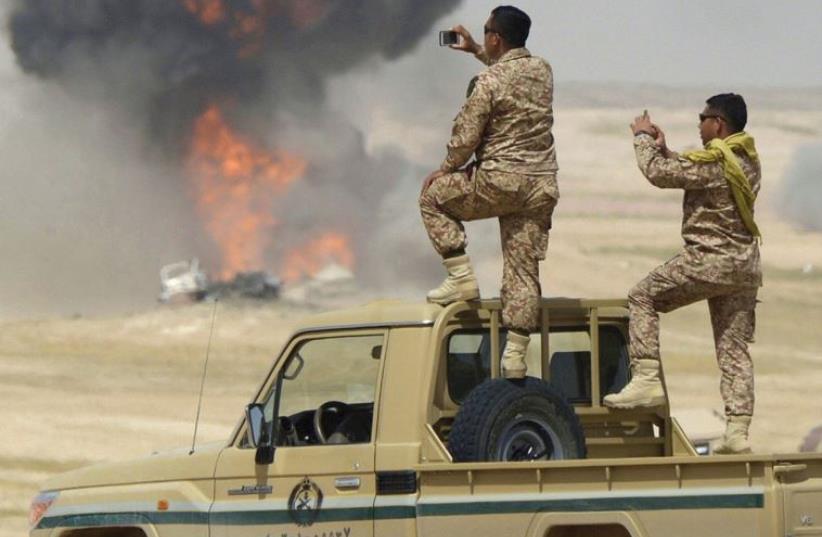 SAUDI ARABIAN soldiers take pictures as flame and smoke are seen following air bombardments during the Northern Thunder exercises, in Hafr Al-Batin, near Saudi Arabia’s border with Iraq in March.
(photo credit: REUTERS)
Advertisement
Saudi Arabian king Salman bin Abdulaziz Al Saud’s five-day visit to Egypt is an expression of the warming of ties between the two countries since Abdel Fattah Sisi became president of Egypt in June 2013. The ouster of Mohammed Morsi and declaration of the Muslim Brotherhood as a terrorist organization in December 2013 were welcomed by Riyadh and immediately rewarded with a $12 billion aid package from Saudi Arabia, Kuwait and the UAE.Yet with king Abdullah’s passing in January 2015 it seemed that the two states were growing apart. The media was quick to point out disagreements on issues such as the countries’ approaches to Yemen, the Muslim Brotherhood and Syria, where the Saudis demanded Assad’s departure as part of any outcome and the Egyptians saw Assad as part of the solution. In Yemen, too, despite expressing support Egypt was reticent about contributing troops. However, despite tactical disagreements, the two countries continued to share common strategic interests vis-à-vis regional threats and challenges.Therefore, Salman’s visit is a testament to the strong relationship – one might even say the alliance – between the two countries. Historically, cooperation between Saudi Arabia and Egypt has been a permanent feature of the Arab state system despite short periods of rivalry and the occasional military confrontation (e.g. the 1962- 1967 conflict in Yemen).The visit is consequential for the countries’ bilateral relationship, primarily for Egypt.According to Egyptian media, no fewer than 36 agreements, worth $25b., were signed during the visit, including establishing a Saudi investment fund worth $16b. The headline is the provision of Saudi aid (perhaps even from the Gulf states) to rebuild Sinai, including creating a free-trade zone, building a university named after Salman and erecting a bridge to connect Sinai and Saudi Arabia. The bridge will allow countless tourists and pilgrims, as well as goods, to cross from one continent to the other. Like the Suez Canal expansion, this project will also contribute significantly to the Egyptian economy. That Sinai is the focus of governmental aid is not surprising, because it is meant to be part of Cairo’s response to the challenge posed by the radical jihadist organizations. The regime understands full well that the answer to the problems in Sinai is not purely military.During the visit, it was announced that the islands of Tiran and Sanafir, located at the entrance of the Gulf of Eilat, would be handed over to the Saudis, who previously controlled them. In 1950, the Saudis decided to lease the islands to Egypt in order to facilitate the Arab boycott and maritime quarantine of Israel. The islands were conquered by Israel in 1956 and again in 1967 but returned to Egypt after the 1979 peace agreement. Therefore, the current agreement will return them to the rightful owners.Israel was reassured by Saudi Arabia, as admitted by Defense Minister Moshe Ya’alon, of its freedom of passage in the Straits of Tiran. This revelation indicates that in spite of the absence of formal relations, Israel and Saudi Arabia hold indirect open channels.From Cairo, King Salman proceeded to Turkey, another regional ally. Apart from strengthening bilateral relations, the king may be mediating a possible Egyptian-Turkish rapprochement. Relations between Egypt and Turkey deteriorated following the Turkish support of the Muslim Brotherhood and Hamas in Gaza. Salman might also be in a position to smooth the differences between Israel and Turkey, who are close, according to media reports, to finalizing their reconciliation over the Mavi Marmara incident.In theory, Egypt, Saudi Arabia (and the GCC countries), Turkey and Israel stand on the same side of the fence against Iran and its proxy allies in the Middle East, as well the various Sunni jihadist groups. Yet, the existing antagonism between Egypt and Turkey, on the one hand, and Israel and Turkey, on the other, prevents the emergence of a viable regional axis. In this situation, Saudi Arabia has a unique place: it’s the only regional player that possesses the financial, religious and political clout to influence the other players’ roles.Since King Salman’s accession to power in January 2015, Saudi Arabia began playing a more assertive role in regional affairs out of concern for its security and stability. In the absence of any meaningful Arab player, Saudi Arabia emerged as an Arab leader by default. It may now serve as the linchpin of a new Middle East grouping.Though Israelis are customarily apprehensive of the Saudi kingdom because of its puritanical Wahhabi doctrine, recent developments should be welcomed by Israeli decision makers, as the Saudis consider Israel a possible partner in the struggle against Iran and the jihadist groups, as long as this partnership is kept behind closed doors.The author is a board member of Mitvim – The Israeli Institute for Regional Foreign Policies. He teaches in the Islamic and Middle Eastern Studies Department at The Hebrew University of Jerusalem.