The Human Spirit: Of pennies and anemones 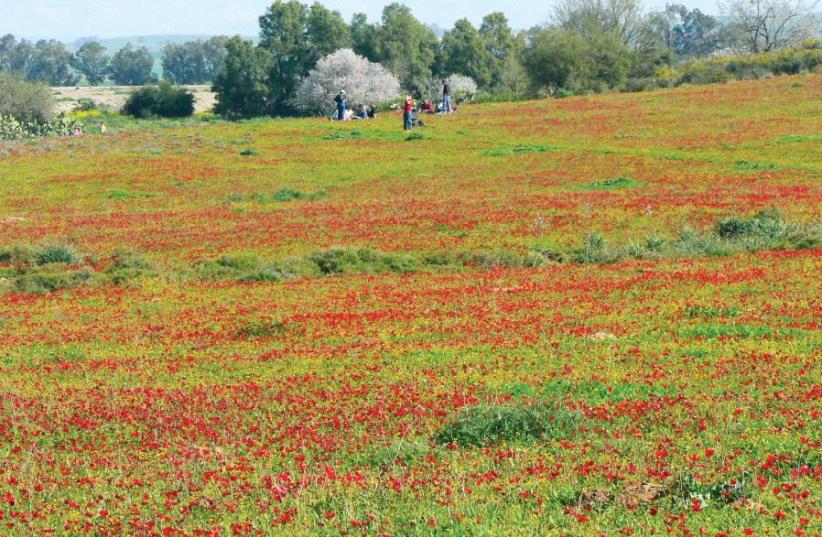 Fields of anemones
(photo credit: MATHKNIGHT AND ZACHI EVENOR/CC BY 3.0 VIA WIKIPEDIA)
Advertisement
The road to Moshav Yishi near Beit Shemesh runs through hillocks dotted with red anemones – kalaniyot they’re called in Hebrew. The country’s voted “most beloved wildflower” is immortalized in the song “Kalaniyot” (words by Natan Alterman, music Moshe Wilensky) recorded in 1948 by the grande dame of Israel song, Shoshana Damari. Mostly, she sang it for our soldiers fighting for Israel’s independence.The roadside is lined with cars, as busy Israeli families are making time on this balmy winter Friday afternoon to glory in homeland flowers.In the song, a young girl brings her mother a basket of anemones, a practice long since prohibited in Israel. In a later stanza, the grown-up girl is walking amid the anemones with her beloved.I’ve driven to Moshav Yishi to meet parents whose children will never grow up. They’ve been murdered by terrorists.The parents have been invited for a therapeutic, restful Shabbat by Deena and Rabbi Menachem Mendlowitz, who built a rustic guest house, with the dream that it would serve as a place for healing.The women know one another well – they’ve been taking part in a support group for years, although no one can say exactly how many. They’re gregarious, delighted to see one another, and ebullient over finding posh lodgings instead of ramshackle huts in this not-yet-gentrified farming region. The men are more somber. Some but not all of the men know one another.The support group has come together under the sponsorship of the Koby Mandell Foundation. Koby Mandell’s parents, Sherri and Seth, are here, too.On a spring day in 2001, Koby and his pal Yosef Ish Ran set out on a Tom Sawyer-ish hike. Terrorists found the 13-year-old children in a cave and stoned them to death. In their son’s memory, Sherri and Seth have created a multifaceted nonprofit to help families like their own.Each of the parents here has a horrendous story.When we gather in the living room, I’m sitting near a woman whose son, then 18, was murdered by gunshot on his way home from registering for school. She’s also concerned for her daughter, a mother of seven, homeless since the demolition in Amona. A young couple witnessed the murder of their seven-month-old in a baby swing.The murderer knocked on their door during a holiday meal and opened fire.Another couple’s son was blown up by a bomber at a gas station.The women’s psychodrama therapist, Zipora Cedar, wants to share with the men what the women have been participating in. Cedar is a veteran practitioner of the method invented by Dr. Jacob Levy Moreno, a treatment in which persons role-play real-life experiences, often playing themselves, sometimes family members or friends who have been affected by their behavior. On a table are piles of scarves: blue, brown, eggplant, red, orange, props for the externalization of hurts and wishes.As an ice-breaker the men and women write two words each on a paper: how their spouse would describe them and how they would like to be described.The papers are tossed in a magician’s hat and read anonymously by others in the room. She sees me as detached, but I’d like her to think of me as contemplative.He thinks I’m obsessive, but I’d like him to think of me as talented. These are still-evolving long marriages that have survived the violent death of a child.In another exercise, one of the women must choose an object, body part or person who is angry at her and act out the part. The volunteer pretends she’s her late mother, angry because she has forgotten to light a memorial candle to mark the anniversary of her death. Then, playing herself, the bereaved mom explains that she is so overwhelmed by sorrow for the child’s death that she cannot mourn more. Instead, she says, she remembers her mother every day, inside of her.Others join in, describing dilemmas over subjects such as whether to bring children and grandchildren to cemeteries.A man admits to relief when his mother died, because she had lived her life without knowing the agony of burying a child. Another speaks of his finally understanding his own father, who refused to speak of his first family killed in a world war.“Let the emotional penny drop inside you,” urges Cedar, reminding the participants of the once-upon-atime tokens that fell in gas meters and phone booths.I feel the penny of gratefulness that I am an observer and not a member in this group. Then falls the penny of thinking how much of life is wasted in anger and resentment over trivialities.And there’s a penny of appreciation for those who haven’t forgotten the deep pain of these bereaved parents and have gifted them with this beautiful Shabbat.Each member chooses two colored scarves – an unhappy one to throw away and another to symbolize the happier expectations for Shabbat. Sadness, worries and fear are cast aside, replaced with joy and fun and relaxation. Cedar covers them with the white scarves of Shabbat sanctity of the Shabbat bride.Anemone coronaria earned its name kalanit because it evokes beauty and majesty, like a bride – kalla – on her wedding day.In the final stanzas of “Kalaniyot,” a grandmother, her eyes glowing with laughter and tears, remembers a forgotten melody.  The author is a Jerusalem writer who focuses on the stories of modern Israel. She serves as the Israel director of public relations for Hadassah, the Women’s Zionist Organization of America. The views in her columns are her own.