The Human Spirit: Waving a bathing suit as a flag of freedom

Pundits, please step aside and let us figure out how we want to swim. 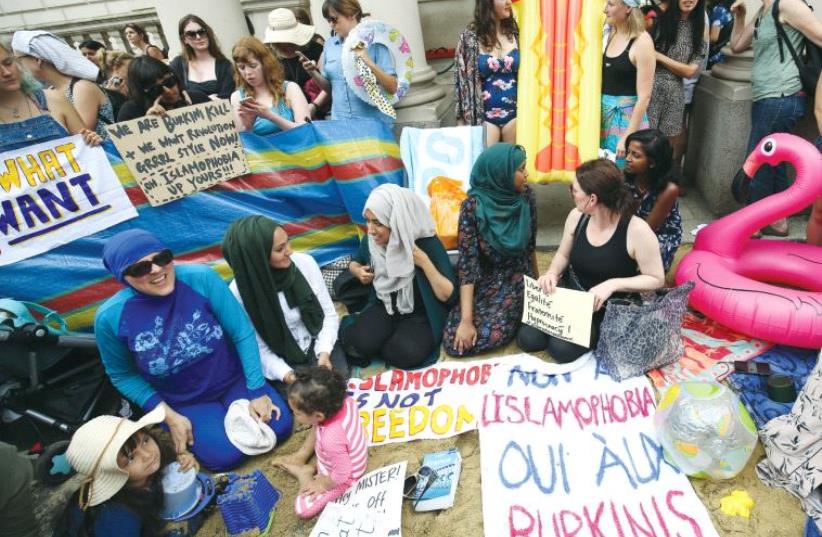 Protesters demonstrate against France’s ban of the burkini, outside the French Embassy in London on August 25
(photo credit: REUTERS)
Advertisement
Here I am on the Adriatic seashore of Italy, the very beachfront where the bikini was long ago banned.That’s right, bikini, not burkini, when it was designed seven decades ago.I first read about the 70th anniversary of the bikini in the AARP’s magazine for folks over 50, but with the burkini ban in France creating headlines everywhere, the history of this popular swimsuit is getting a lot of exposure. Ironically, public figures and journalists – many of them men – wave either burkinis or bikinis as new flags in a cause célèbre.Who invented the bikini? The two modern contenders are both Frenchmen.It seems that in 1932, Jacques Heim, a Jewish designer who got his start in his parents’ fur business, designed a two-piece suit with bloomers and ruffles, but French women weren’t daring enough to wear it. He relaunched it in 1946, and hired skywriters to advertise.Louis Réard, a mechanical engineer who took over his mother’s lingerie business in about 1940, created a similar suit. Heim called his “the Atome,” Reard called his “bikini,” for the atoll in the Marshall Islands where the United States tested hydrogen bombs beginning in 1946. Although Réard is more often referenced as the inventor, Heim managed to survive World War II in Nazi-occupied France, and went on to create a sportswear company whose customers included Sophia Loren and Mamie Eisenhower.IRONICALLY, IT is here on the Adriatic beach, where I spend an annual summer retreat, that I have admired the seeming lack of self-consciousness with which the women wear bikinis.The beach is peopled by families, not divas, and you’ll see grandmothers strolling, moms with toddlers on their hips, young women tossing beach balls in the waves – all wearing bikinis. Peddlers cross the sand with racks of bargain bikinis in all sizes, and customers buy without trying them on.I contrast this astonishing ease with my experience both in my American childhood and adulthood in Israel to women hating bathing suit shopping.According to an academic study on college students quoted in the magazine Self, these young women felt anxious and depressed about trying on bathing suits. Indeed, when I once wrote about Israeli bathing suit pioneer Gottex, I heard that even supermodels disliked trying on bathing suits.When the late Leah Gottlieb, founder of Gottex, saw Israeli women wearing cotton suits in Tel Aviv, she used her experience with more amenable fabrics from the family raincoat business in Hungary to create more comfortable and attractive garb.The story echoes that of Australian prize-winning swimmer Annette Kellermann who invented the modern one-piece suit. She was arrested for indecency in 1907 on Revere Beach, Massachusetts.WHICH BRINGS us to the burkini, which was banned on a number of French beaches this summer.In a fascinating interview in the Guardian, purported burkini-inventor Ahada Zanetti, also Australian, said she created this suit in 2004 so that her niece could play netball. Zanetti was worried that members of her community would object to the relatively form-fitting suit. Said Zanetti: “I looked at the veil and took away a lot of the excess fabric, which made me nervous – would my Islamic community accept this? The veil is supposed to cover your hair and your shape, you just don’t shape anything around your body. But this was shaped around the neck. I thought, it’s only the shape of a neck, it doesn’t really matter.”To her, the garment “symbolizes leisure and happiness and fun and fitness and health and now they are demanding women get off the beach and back into their kitchens?” Last week, France’s high court suspended the ban, saying it “seriously and clearly illegally breached the fundamental freedoms to come and go, the freedom of beliefs and individual freedom.”In Israel, modest women’s swimwear was first designed by Canadian immigrant Marci Rapp (profiled in these pages when both she and her son donated a kidney to save the lives of strangers) to provide the many women who cover their elbows and knees in public, with an option for the water. Her company, MarSea, offers a variety of designs – some close to wet suits and others that are water dresses.Last month, I spent a summer morning at the beach in Herzliya near the upscale Arena Mall. Dozens of women in new burkinis are near me. Some have created their own style, half burkini, half tight jeans. A few Jewish women are wearing modest suits, either MarSea’s or one of many companies that now compete in this market. Mostly, the young women are wearing new trendy bikinis. Knowing how hard bathing suit shopping is for us non-Italians, I wonder how long it has taken them to choose those bathing suits and if they feel good. Self-image is a struggle. It’s hard to know in this world who chooses and who yields to pressure: self-inflicted, spousal, religious or governmental.Pundits, please step aside and let us figure out how we want to swim. The author is a Jerusalem writer who focuses on the wondrous stories of modern Israel. She serves as the Israel director of public relations for Hadassah, the Women’s Zionist Organization of America. The views in her columns are her own.