The unlikely likelihood of a centrist bloc

Livni is right that it is time to put aside egos and create a bloc that can run together in the next election. 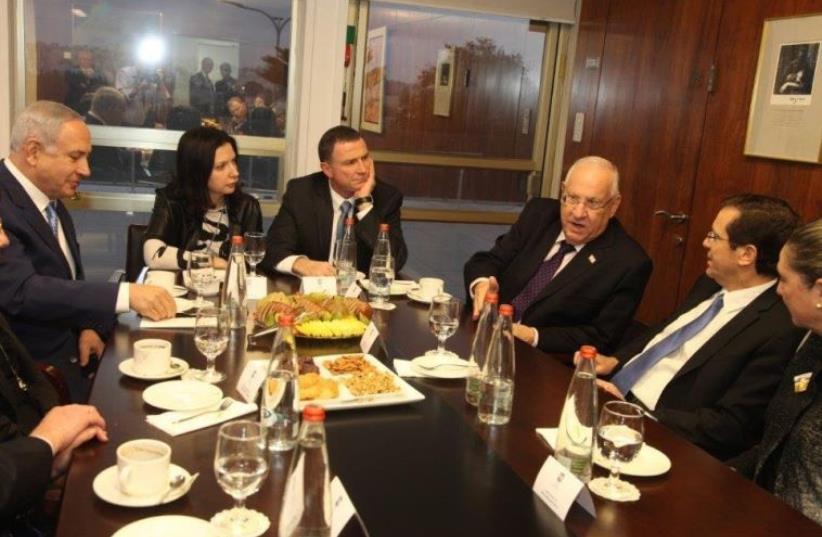 Prime Minister Benjamin Netanyahu, Knesset Speaker Yuli Edelstein, President Reuven Rivlin, Head of the Opposition Isaac Herzog and Tzipi Livni attend the Knessett Open House
(photo credit: KNESSET SPOKESMAN'S OFFICE)
Advertisement
Benjamin Netanyahu’s volte-face last week in which he dropped the idea of a coalition with Isaac Herzog and instead opted to bolt back to the arms of Avigdor Liberman spurred calls for the creation of a centrist bloc to topple the prime minister.“There is the hope that this is now an opportunity for all those who see what’s happening to unite into one major camp to fight – all the parties that represent values different to the ones that this government represents,” Zionist Union MK Tzipi Livni wrote in a Facebook post.“We have to tell the truth: the parties’ political sagas are far less important right now, and that includes the Labor Party primaries. The important thing is to now stand up together and produce an alternative bloc that can win the public trust,” she said.But does the math add up? How could a new version of Kadima, the last party to wrestle power from the Likud, emerge? And could the coalition of centrist, moderate-left and moderate-right politicians that would be needed be able to live together in one broad tent? First the math.Herzog and Livni fused Labor with Hatnua – itself a breakaway from Kadima – in the 2015 elections and came tantalizingly close, but failed at the last moment as Netanyahu drew away votes from the nationalist camp to score a 30-24 victory.The Zionist Union, meanwhile, has faded in the polls, collapsing to just 13 seats in a May 16, Channel 10 poll, were there to be an election today. The momentum has swung in favor of Yair Lapid’s Yesh Atid, which has risen from 11 seats in the current Knesset to 20 in the poll, and with the Zionist Union imploding, could well gain further.Lapid could conceivably gain enough ground to pip Likud to the post in the event of elections, but would probably struggle to form a coalition given his problematic past relations with the ultra-Orthodox, despite recent efforts to mend bridges.That brings in a possible run by Gideon Sa’ar, who quit politics in 2014 and has since been biding his time on the sidelines. Sa’ar, a former Likud education minister, could challenge Netanyahu from within for the Likud leadership, or he could run with Finance Minister and Kulanu leader Moshe Kahlon and former chief of staff Gabi Ashkenazi.A March poll suggested that trio could take 23 seats to Likud’s 22, but, of course, that would come at the expense of Yesh Atid, and Netanyahu could easily counter with an electoral alliance as he did in the 2013 elections with Yisrael Beytenu.In the meantime, Moshe Ya’alon has become available and could launch his own bid from within Likud, run with a Sa’ar-Kahlon bid or, as coalition chairman David Bitan of Likud has claimed, join forces with Yesh Atid.All those options leave it too close to call, however.For any constellation to gain a convincing lead over Likud, it would need a convergence of forces. Livni would surely be happy to jump the sinking Zionist Camp ship and bitter infighting plaguing the Labor faction and switch parties for the fifth time in her political career, but can the required parties be brought together to create a large enough bloc that could go on to form a coalition The ego equation.Sa’ar would never run with Lapid and Yesh Atid on the same list – although, in Israel, the unexpected can always happen and often does – but would probably be willing to form a coalition.Lapid sees himself as candidate for prime minister and certainly wouldn’t run in a bloc he doesn’t lead. The other problem is who would be number one if Sa’ar, Ya’alon and Ashkenazi join forces? All are likely to want to lead the pack.Livni’s call for an open primary to choose a challenger to the prime minister in the next general election is an interesting idea, but unlikely to materialize, especially if she sees herself as the leader of that bloc.Next problem, politics.Sa’ar is a hard-liner on the Palestinians as is Ya’alon. Lapid has been shifting rightward to gain traction. A coalition between a Sa’ar-Kahlon-former chief of staff trio and Yesh Atid could be conceivable; none of the other options seems feasible.Bottom line.Livni is right that it is time to put aside egos and create a bloc that can run together in the next election and create the conditions needed to sway away Likud voters who are dismayed by the party’s abandonment of its traditional liberal values. Only problem is, it isn’t likely to happen – a centrist bloc will in all likelihood remain a pipe dream and fractured politics could leave Netanyahu in power for the foreseeable future.