Above all Akiva placed love at the center of his worldview – love of God, love of Israel, love of humanity, love of Torah, love of the Land of Israel. 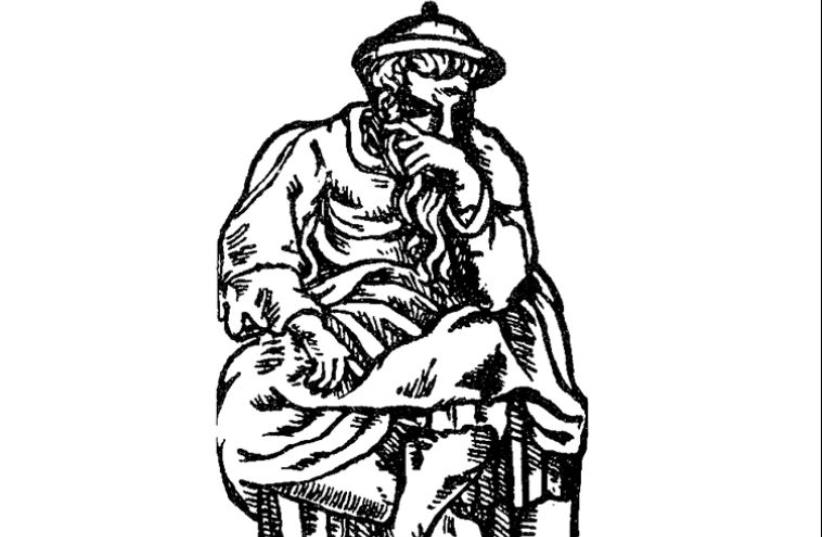 Rabbi Akiva
(photo credit: Wikimedia Commons)
Advertisement
The best thing about writing a book is that you learn so much about the subject that you did not know. I thought I knew a great deal about Rabbi Akiva as a result of years of teaching rabbinic texts, many of which were the work of Akiva and his students.
Yet I discovered that many stories about him were later legends that had little or no basis in reality and that frequently truth was more interesting than fiction. But the most important thing I discovered was that he was a much more complex person, greater and more daring than I had imagined.
His accomplishments were enormous. His work in collecting and ordering centuries’ worth of Jewish laws and traditions laid the foundations for the greatest collections of rabbinic teachings: the Mishna and the early midrashim. Rabbinic Judaism is unimaginable without Akiva’s work. Yet he also devoted himself to the welfare of his people and to helping those in need. He was not above the people but of them, serving God through serving others.
He was also a fascinating human being, nothing less than a maverick. The very fact of becoming the leading sage of the age when he came from a family of poor uneducated people – amei ha’aretz – and had no knowledge of Torah until he was already a mature adult – is amazing. But so, too, is his personality.
He delighted in doing things that amazed his teachers and his colleagues.
He did not hesitate to disagree with the very sages who were his mentors and to take actions that were in defiance of them.
He equally amazed his students when he gave decisions on Jewish law that seemed outrageous to them.
He told them openly that the purpose of Jewish Law was not to be strict, but to find ways to be more lenient. “The sages did not say these things to be stringent, but to be lenient,” he said.
He was a man of the people, a defender of the rights of the poor in his legal decisions. In more than one instance he overturned ancient legal decisions that he felt were incorrect – at the same time as being extremely strict in his own observance of ritual demands. There is no doubt that Akiva was a maverick who constantly surprised everyone with his actions and his decisions.
Above all he placed love at the center of his worldview – love of God, love of Israel, love of humanity, love of Torah, love of the Land of Israel. Living at a time when Jews had lost control of their own land and were governed exclusively by Rome – which he did not love – he nevertheless taught that humanity as a whole was beloved of God and, in contrast to his rival, Rabbi Ishmael, required that Jewish courts treat nonJews – Romans included – as the equals of Jews and dispense true justice.
Of equal importance is the fact that Akiva was a sensitive person who refrained from condemning others even when they disagreed. Nor do you ever find him preaching to the people about their sins and castigating them. He searched for ways of acceptance and of influencing people through positive rather than negative methods.
In his works and his ways he was a true disciple of Hillel the Elder, whose approach was very similar. For both of them the most important verse in the Torah is “Love your fellow as yourself.”
A legend says that Moses was shown a vision of Akiva teaching in his house of study and Moses was so amazed at Akiva’s brilliance that he said to God, “You have such a man and yet you chose to give the Torah through me?!” The later sages also said of Akiva that he and Ezra were the two people who saved the Torah when it might have been forgotten.
We in our age could use rabbinic leadership that would emulate Akiva, trying to help people and to overcome difficulties rather than constantly placing more stumbling blocks in the path to Jewish observance.
The book I wrote about Akiva is about to appear in Hebrew. I hope that rabbis everywhere will read it and see that there are ways to be both faithful to Jewish tradition and Jewish law and still make it applicable to the needs of the time.
We can all learn from Akiva that, by obeying the commands to love that are found in the Torah, it is possible to teach and preach a Judaism that touches the heart and reaches the soul of Jews who are looking for ways to make their lives meaningful and to relate to a Judaism “whose ways are ways of pleasantness and all of whose paths are paths of peace.”
The writer is a former president of the International Rabbinical Assembly. His latest book, Akiva: Life, Legend, Legacy is being published in Hebrew by Yediot Books and the Schechter Institute.