The concept of “giving trees” has existed in the Jewish tradition for centuries. 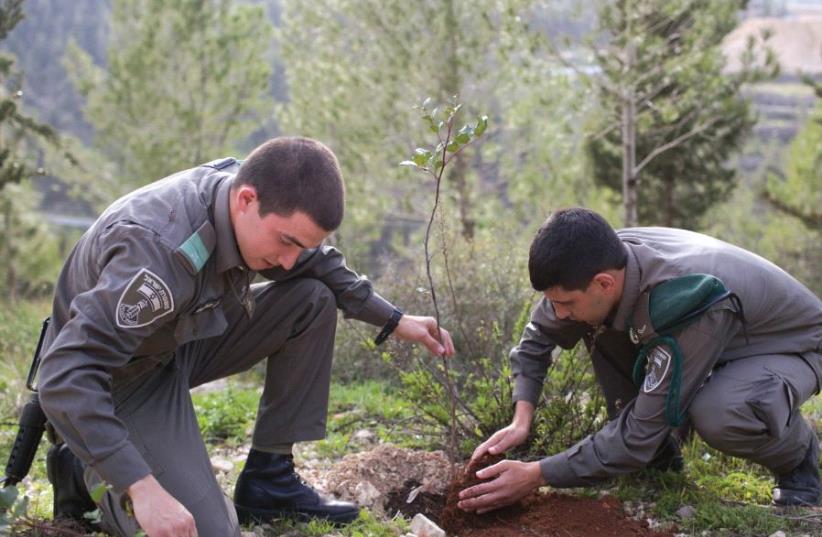 BORDER POLICEMEN plant trees for Tu Bishvat in the Arazim Valley near Jerusalem in 2013.
(photo credit: MARC ISRAEL SELLEM/THE JERUSALEM POST)
Advertisement
Walk by any Israeli bookstore in the days leading up to Tu Bishvat, the Jewish New Year for Trees, and you’ll likely see one of my favorite children’s books, Shel Silverstein’s 1964 classic The Giving Tree prominently on display.The book follows the lives of an apple tree and a boy, who develop a unique relationship. The tree is very “giving”, but the boy evolves into a “taking” adult. In his childhood, the boy enjoys playing with the tree, climbing it, swinging from its branches and eating its apples. However, as the boy grows older he spends less time with the tree and tends to visit only when he wants material items. In an effort to make the boy happy, the tree gives of itself, offering supplies which the boy can then transform into material items, such as money (from the tree’s apples), a house (from the branches) and a boat (from the wood of the trunk).With every stage of giving, the story relates, “the Tree was happy.”In the final pages, both the tree and the boy feel the sting of their respective natures. When only a stump remains of the tree, the tree is not happy, at least at that moment. The boy does return as a tired old man to meet the tree once more and states that all he wants is “a quiet place to sit and rest,” which the tree can provide. With this final stage of giving, “the Tree was happy.”I always thought that this was merely a nice story. Yes, trees supply fruit, shade, wood, oxygen, homes for many animals, and so much more, but the idea of an actual “giving” tree seemed to me to be confined to the pages of children’s books. But then a press release from the Weizmann Institute of Science crossed my desk that made me change my mind.While studying trees during his postdoctoral fellowship, Israeli researcher Dr. Tamir Klein made such a startling discovery that his research supervisor at the University of Basel at first declared that the finding must have been a mistake.In the forest, trees are known to compete for resources such as light and nutrients, but Klein found that the same trees also engage in sharing. He showed that carbon molecules taken up by the canopies of mature spruce trees were passed through the soil in surprisingly large quantities to neighboring beech, larch and pine trees.As he reported in the journal Science in 2016, the carbon was being transferred via “underground highways” formed by overlapping networks of root fungi.“Neighboring trees interact with one another in complex ways,” Klein said in a statement. “Of course, there is a great deal of competition among them, but they also form communities, sorts of ‘guilds,’ within which individual trees share valuable resources. In fact, trees belonging to a ‘guild’ usually do much better than those that don’t.”In his new lab in the Weizmann Institute’s Plant and Environmental Sciences Department, Klein follows up on these findings to investigate tree ecophysiology, or how the tree functions in its ecosystem.“Studies on ‘underground’ tree collaboration may reveal which tree species get along well, and this may help determine which trees should be planted next to one another,” he says. “Our studies have additional relevance to forestry and agriculture because we elaborate on the mechanisms of growth and drought resistance of different tree species.”So if trees do in fact form communities and share resources with their neighbors, I guess they really are “giving” trees after all.But the concept of “giving trees” has existed in the Jewish tradition for centuries. The Talmud (Taanit 5b) relates how Rav Nachman once asked Rav Yitzchak to bless him before the two parted ways.“How can I bless you when you already have everything?” Rav Yitzchak asked. “Shall I bless you with Torah knowledge? You are already a Torah scholar! Shall I bless you with wealth? You are already a man of great resources! Shall I bless you with children? You already have them!” Rav Yitzchak found the solution to his problem by recalling a parable.A man wandered in the desert, weary, hungry and thirsty. He came upon a tree with sweet fruit, pleasant shade and a stream of water flowing beneath it. He ate of its fruit, drank from its water and relaxed in its shade. As he was about to depart, refreshed, he turned to the tree and said: “Tree, oh tree, how can I bless you? Shall I bless you that your fruits should be sweet? They are already so! Shall I bless you with pleasant shade? You already have it! Shall I bless you that a stream of water pass beneath you? One already does! All I can bless you with is that all the trees which are your offspring shall be like you.”“Thus,” concluded Rav Yitzchak, “I can only bless you [Rav Nachman] in the same manner: that all of your offspring shall be like you!” Happy Tu Bishvat!

The writer is the contributing editor of NoCamels.com.