Way to the wall

The Berland incident does, however, show that when administrators of the Western Wall have the will, they can solve problems. 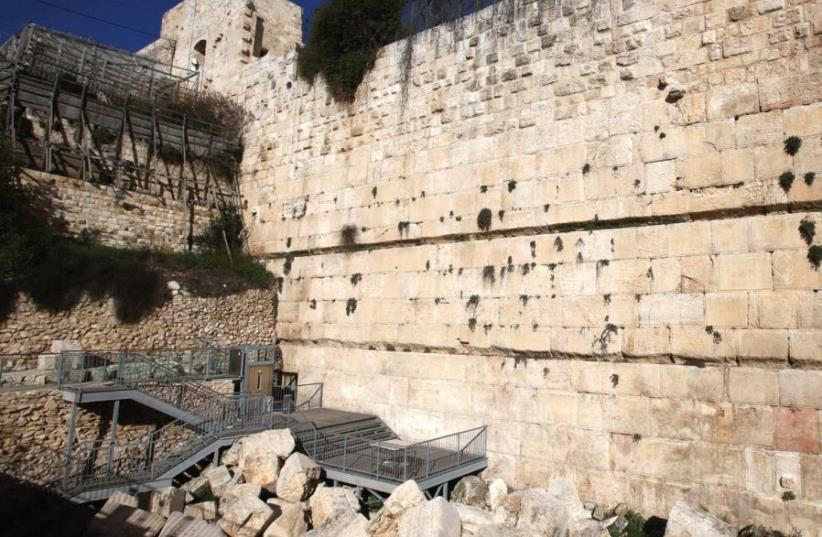 The Robinson's Arch area of the Western Wall
(photo credit: MARC ISRAEL SELLEM/THE JERUSALEM POST)
Advertisement
Where there is a will, there is a way. Over Passover, an elderly rabbi, who happens to be a convicted sex offender, was allowed to drive his car up to the Western Wall to pray at the holy site.On Wednesday, the chauffered car of Rabbi Eliezer Berland, 80, was allowed entry so that the ailing spiritual leader of the Shuvu Banim Breslov Hassidic community could approach the Western Wall.Dozens of Berland’s followers, who are convinced their rabbi was a victim of a conspiracy, accompanied him with song and dance.A spokeswoman for the Western Wall Heritage Foundation claimed that Berland was not given any special breaks. The foundation’s spokeswoman told The Jerusalem Post’s Religious Affairs Correspondent Jeremy Sharon that anyone of advanced age who has difficulty walking is eligible for vehicular access to the plaza during the intermediary days of Passover and Sukkot.The foundation does not, apparently, have a policy of checking the criminal record of those who ask for such access. Nor should it.Berland has already served his prison sentence.Berland’s driver took the liberty of driving Berland all the way up to the Kotel – a privilege the foundation spokeswoman claimed was seized not given.The Berland incident does, however, show that when administrators of the Western Wall have the will, they can solve problems.The same sort of goodwill unfortunately does not yet exist when it comes to creating a prayer space for non-Orthodox streams of Judaism and for the Women of the Wall.Since January 2016, when the cabinet ratified a plan for the creation of an egalitarian prayer, accessible 24 hours a day, visible from the Western Wall plaza and located along the southern section of the Kotel, the government and Prime Minister Benjamin Netanyahu have been dragging their feet, clearly uninspired by the endeavor.In June 2017, Netanyahu, under pressure from his haredi coalition partners, reneged on that plan. But he pledged to move ahead with alternative plans to upgrade the Robinson Arch area, without critical elements of the original agreement that was reached in concert with representatives of the non-Orthodox streams of Judaism and Women of the Wall. These included a shared entrance to the main Western Wall complex and state recognition of non-Orthodox streams’ right to run the prayer space and receive funding.The Prime Minister’s Office began to advance its plans without consulting with the representatives of the non-Orthodox streams.In January, the High Court of Justice demanded that the state notify it by April 15 regarding progress on upgrading the current egalitarian section at Robinson’s Arch Pavilion, which is part of an archeological site.Presently, two areas of prayer platforms, built over and among the archeological remains, are in place. The larger section does not touch the Western Wall and is suspended by a construct resembling bleachers.The second section is broken up into several landings before it reaches the Kotel.In February, preliminary construction began to expand the area so that up to 1,200 people could safely pray at the site together.In March, Attorney-General Avichai Mandelblit ruled that the Robinson Arch area should be designated a “holy site” for pluralistic prayer and that neither the Orthodox Western Wall Heritage Foundation nor the Orthodox Chief Rabbinate should have any control over the area.The construction and Mandelblit’s ruling are positive developments.And on April 15 the government is supposed to update the High Court on its efforts.The question is how Netanyahu will react if, or rather when, haredi leaders begin to organize demonstrations to protest the construction at Robinson’s Arch. Will he cave in again to political pressure from his haredi coalition partners? The ultra-Orthodox functionaries who run the Western Wall plaza have shown that when there is a sincere desire to find a solution for an old ailing rabbi, even if he is a sex offender, they can find a way.We can only wonder whether Netanyahu is sincere when he claims to be seeking a solution for non-Orthodox Jews.