Why Israel must not ape America

no Israeli in his right mind – would view the choice between saving the life of a child and protecting that of a primate as a dilemma. 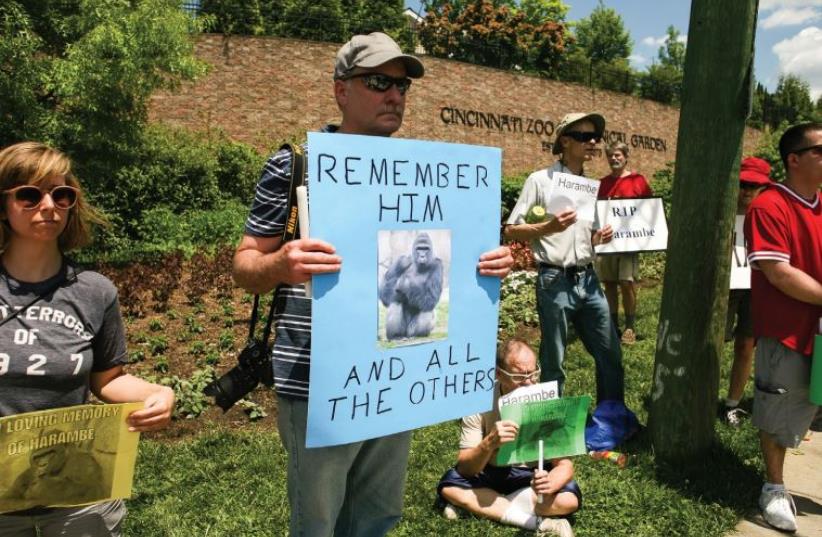 Gorilla protest
(photo credit: REUTERS)
Advertisement
Beaten down by decades of moral-equivalence abuse, Israelis treated the case of the gorilla killed by its attendants at the Cincinnati Zoo this week as they do any debate surrounding the legitimacy of firing a weapon.With an IDF soldier on trial for shooting a subdued Palestinian terrorist – and a brouhaha that attracted international attention while causing domestic angst – the issue of whether an ape suffered a wrongful death pales in comparison.This is not to say that the Hebrew-speaking media did not consider the case of Harambe the gorilla worthy of coverage. On the contrary, the item captivated Israeli news outlets as much as any other.But there was something missing in the discussion in the studios of Tel Aviv and Jerusalem: the vitriol against the zoo-keepers in Ohio, who were faced with a painful choice that had to be made under the unfortunate circumstances. When a three-year-old boy fell into the enclosure of a 420-pound ape – and was swung and dragged every which way, into and around water – the life of one was suddenly thrust into the balance against that of the other.What made the event particularly tragic for all concerned was that the gorilla did not appear to be attacking the toddler with purposeful aggression; in fact, he seemed confused, and had he been female the whole episode might have turned out differently.But his immense strength, grip and movements were enough to kill the child, however inadvertently.Anyone watching the video of the horrible scene can see this clearly. Indeed, the little boy would not have survived even minutes more in the clutches of the 17-year-old silverback.Furthermore, according to the zoo, shooting the gorilla with a sedative dart, which would have first made him agitated and then taken time to have the desired effect, was not an option. So the only recourse was to rescue the boy at the expense of the ape.Animal-rights activists and many other Americans responded to this life-saving gesture as though it were an act of first-degree slaughter. Indeed, “murder” was the word bandied about on social media – aimed both at the zoo and at the child’s mother, who was accused of being at fault for not preventing her son from climbing the fence of the enclosure and falling in. The harsh criticism culminated in a change.org petition, titled “Justice for Harambe,” which has garnered hundreds of thousands of signatures.This is but one piece of evidence to suggest that “enlightened” Americans have lost their moral marbles. And the fact that the phenomenon has reached such an extreme provides insight into the peculiar popularity of Donald Trump, who speaks from the gut without any nuance or sophistication about issues that once would not even have been the subject of debate among anyone other than philosophers.It used to be said of Israel that it lagged behind the United States by about 10 years where style, culinary preferences and sociological concepts were concerned. So, for example, both bell-bottoms and educational experiments hit the shores of the Holy Land well after they went out of fashion in New York and Los Angeles. Today, due to satellite TV and the Internet, the gap has narrowed to about 10 days, if not 10 minutes.This is why Israelis are now up to speed when it comes to what they wear and eat. They are also well-versed in educational fads and political correctness.Amusingly, the key effect of this imitation has been a plethora of start-ups geared toward cornering untapped markets.But no Israeli in his right mind – other than those who, like their counterparts abroad, hold members of the animal kingdom in higher esteem than members of the human race – would view the choice between saving the life of a child and protecting that of a primate as a dilemma.It is for this reason that Israel’s Channel 2 morning talk show invited a veterinarian from one of the country’s zoos to explain why the large mammals, though magnificent and fascinating, are dangerous.He even showed a video of himself behind a glass barrier being “attacked” by a primate he regularly treats. Like a kid afraid of the doctor who administers vaccine shots, the ape expressed his displeasure at the sight of the vet. And, like a pediatrician who then gives a child a lollipop for having undergone the unpleasant experience, the Israeli vet is seen trying to ingratiate himself with the massive monkey, with only a minor degree of success.What came across was this man’s deep admiration, even love, for the animal. This attitude was clearly that of the Cincinnati zoo-keepers toward Harambe. But it was their moral duty to wrest the baby from his grasp, and the only way they were able to do that was by eliminating him as a threat.Kudos – and condolences – to them.Woe to Israel, which is forced to grapple regularly with ethical questions surrounding the killing of Palestinian terrorists and the innocent people caught in the cross-fire, if it viewed the Harambe incident otherwise. Indeed, aping America in this respect would be suicide for the Jewish state.The writer is the managing editor of The Algemeiner.