The most common autoimmune disorder seen in patients with Lyme disease is rheumatoid arthritis (RA). PTLDS is considered if you have suffered in the past.

Is Lyme an Autoimmune Disease?

Lyme disease is caused by the bacteria Borrelia burgdorferi, which is transmitted to humans via a "tick bite." The condition can cause debilitating and persistent symptoms that can affect bones, joints, and muscles.

Depending on the stage of infection, it can also lead to cognitive impairment, facial paralysis, and arthritis. These symptoms are similar to those of many autoimmune disorders.

What is an autoimmune disorder?

What are the signs and symptoms of Lyme disease?

Most people who are diagnosed with Lyme disease do not recall being bitten by a tick, and a tick is also not commonly found at the site of a rash or bite. Its classic diagnostic symptom is a "bullseye rash" that can present at the site of the tick bite within 24-48 hours.

The rash starts as a small circle and gradually spreads around the bite point. The rash is warm to the touch but is not itchy or painful. However, the tricky part is that this rash may not even appear in most cases.

Most patients come down with nonspecific symptoms like fever, chills, malaise, and weakness that mimic flu or viral fever.

Although most symptoms are successfully treated within 2-4 weeks of oral antibiotic therapy, patients can sometimes have symptoms of pain, fatigue, or cognitive impairment that last for more than 6 months after completing treatment.

This is known as post-treatment Lyme disease syndrome (PTLDS).

PTLDS has become more common over the years, and individuals who have had antibiotic treatments are reporting symptoms they believed had completely disappeared.

According to research, even long-term antibiotic therapy cannot affect certain Lyme bacteria. When all bacteria are not killed, the initial symptoms might progress and cause severe neurological health issues. These remnants of the bacteria can trigger your body’s autoimmune response and cause symptoms of or similar to autoimmune disorders.

Another typical phenomenon observed in patients with Lyme disease is the occurrence of the Jarisch-Herxheimer reaction. In this reaction, the immune system of patients who are being treated with antibiotics triggers an inflammatory response all over the body.

It is a mild reaction, commonly known as a die-off reaction, and it is typically seen where the symptoms peak and subside within 24-36 hours.

Learn more about the Herxheimer reaction in Lyme disease.

PTLDS, or an autoimmune involvement, is considered if you have suffered from Lyme in the past and suddenly, after weeks or possibly even after months and years, you start showing symptoms like:

The list of these symptoms might vary in different cases. Not all patients present symptoms with the same intensity, frequency or for the same duration or have the same symptom picture.

Most patients with Lyme disease who present with nonspecific symptoms such as weakness, fatigue, persistent muscular pain, and acid reflux are initially misdiagnosed as having a nutritional deficiency or a faulty lifestyle by their doctor.

Rarely do doctors co-relate the history of Lyme with these current symptoms and can diagnose PTLDS. This is also the reason for further aggravation of these “autoimmune symptoms of Lyme disease.”

How does Lyme disease affect your immune system?

The bacterial infection triggers the immune system, thus resulting in the misdiagnosis surrounding Lyme and autoimmune disease. Hence, there is a clear connection between both conditions.

Patients who suffer from chronic Lyme disease can have the exact symptoms of RA, i.e., joint pain, stiffness, and inflammation of the joints, even without actually testing positive for RA.

In case a patient with chronic Lyme disease develops RA at some point, it is most likely to remain undiagnosed for a very long period of time. RA is diagnosed only after the typical joint deformities associated with it begin to manifest either externally or radiologically.

There are multiple case studies that have recorded several cases of Lyme disease that appeared to mimic autoimmune disorders, including:

What is the treatment for chronic Lyme disease?

A short course of oral antibiotics is an effective treatment in the majority of cases. But when a patient has nonspecific symptoms and no signs of active infection (as in PTLDS), they require pulsed electromagnetic field therapy (PEMF) therapy to alleviate their persistent symptoms. 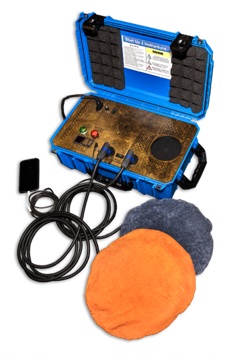 PEMF therapy also works exceptionally well at strengthening the function of a weakened immune system. Once the immune system begins to work at its optimal capacity, the body can then fight off any infection easily.

For more information, read this article on how PEMF therapy can help with Lyme disease.

FAQs about Lyme and autoimmune disease

1. Is lupus related to Lyme disease?

As described earlier, Lyme does tend to mimic other autoimmune conditions. In many cases, the disease can be misdiagnosed as lupus, as the symptoms are similar to a large extent in both conditions. However, both conditions have different causes: Lyme is a bacterial infection, while lupus is an autoimmune disorder.

Although they have similar symptoms, which can also be differentiated on close examination, lupus and Lyme are not related to each other at all.

There is evidence that the vicious cycle of inflammation->response->inflammation seen in chronic Lyme disease becomes a never-ending trigger for the immune system (described in detail above).

A positive ANA test is seen in a large number of chronic Lyme disease cases. The condition is known to trigger autoimmune responses and can be the cause of ANAs in such cases. In a clinical review, ANAs were not observed to interfere with the Lyme assay; however, the presence of Lyme antibodies may interfere with the ANA test.

As we discussed in multiple instances, chronic Lyme, or PTLDS, is a result of chronic inflammatory changes seen all over the body. The primary source of this inflammation is the chronic stress caused by the bacteria B. burgdorferi over the hypothalamic–pituitary–adrenal axis.

This article was written in cooperation with SentientLight LLC