Gene Simmons was front man and bassist in the popular rock band Kiss. He is an ardent supporter of Israel. He was born as Chaim Witz in Tirat Carmel, near Haifa, in 1950. His mother Flora was a Holocaust survivor. In 1960, Flora and her son moved to Jackson Heights in Queens New York. After an illustrious career in music, as well as a reality TV show, Simmons returned to Israel in 2011. Kiss performed in Israel for the first time in September 2014. 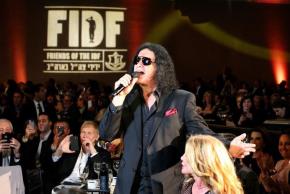 According to the lawsuit filed, Simmons turned standard interview questions into sexual innuendos, among other accusations.

1 COVID-19 no longer infectious after 11 days, new study claims
2 Roger Waters – getting a taste of his own medicine
3 Joe Biden's nickname for US President Trump: 'President Tweety'
4 These 10 Yiddish words will get you through quarantine
5 Israeli scientists: Gaucher’s disease drugs effective against coronavirus