Sights and Insights: A surprising look below the surface

Eilat reminds me that there often lies more beneath the surface if we will simply explore, Dr Wayne Stiles says.

By WAYNE STILES
Eilat 311
(photo credit: BiblePlaces.com)
Advertisement
Wayne Stiles is an author who has never recovered from his travels in Israel—and loves to write about them from his desk in Texas.When we think of the Red Sea in the Bible, we tend to picture Charlton Heston—or perhaps, I should say, Moses leading the Jews out of Egypt. The parting of the sea set the stage for one of history’s most incredible escapes (Exodus 14:29-31). This body of water parted like curtains in the opening act of Israel’s history.But this part of the Red Sea represents only half of its northernmost edges. The sea has two fingers that point north, divided by the Sinai Peninsula. The more famous finger, the one that parted in the exodus, is the western one—today called the Gulf of Suez. 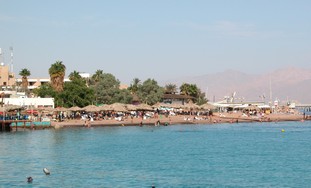 Photo:BiblePlaces.com
If the western finger of the Red Sea represented Israel’s beginning as a nation under God, the eastern section, or the Gulf of Akaba, could perhaps embody Israel’s ongoing relationship with the Lord. Moses and the children of Israel passed the eastern section of the Red Sea as they circumvented the land of Edom and headed north to the area east of the Jordan River (Numbers 33:35-36; Deuteronomy 2:8). The port cities of that time were Ezion Geber and Elath—from which we get the modern spelling, Eilat. Eilat sits at the northern tip of the Gulf of Akaba, as did the ancient city. Often closely associated with Ezion Geber, the cities served as key ports for Israel’s trade with Africa and the Arabian Peninsula. King Solomon constructed a fleet of ships at Ezion Geber (1 Kings 9:26-28). King Jehoshaphat also assembled ships at Ezion Geber to sail to Ophir, but God scuttled them because of an evil alliance Jehoshaphat had made (1 Kings 22:48; 2 Chronicles 20:35-37). Although King Uzziah recaptured Eilat during his reign, the Arameans would later conquer it and remove Judah from controlling the port (2 Kings 14:22; 2 Chronicles 26:1; 2 Kings 16:6). Today, Eilat still plays a crucial role as a port city for Israel, a fact easily seen by the many tankers and cargo ships that frequent the gulf. Israel’s imports and exports to and from Asia and East Africa have their touch point in Eilat. But Eilat is more than a modern port. Since 1949, Eilat has been transformed into a beautiful resort city, and it remains the only Israeli town on the Red Sea. With beautiful beaches, marine life, snorkeling and scuba diving, bird watching and luxurious hotels the city really does have it all. It even has its own airport. The place literally was built for tourists. 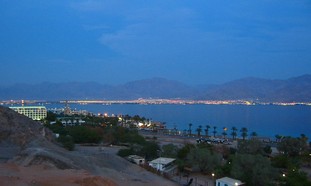 Photo: BiblePlaces.com
The sea looks crystal clear and shallow enough to reward any visitor wearing a mask and snorkel with a marvelous peek at one of the richest ecosystems on earth. Scuba divers can swim with dolphins at the Dolphin Reef. Those preferring to stay dry can still behold the wonders of the sea in a glass-bottomed boat. A visit to the Underwater Observatory, south of Coral Beach, allows anyone to stare up close and wide-eyed at a part of creation rarely seen by landlubbers. Sharks, sea turtles, sponges, invertebrates, red tropical groupers, and coral reefs, are easily viewed behind glass walls thirty feet below the surface. A nearby oceanographic museum educates visitors on the marine life they’ll see. Over 500 species of fish is a lot to take in! 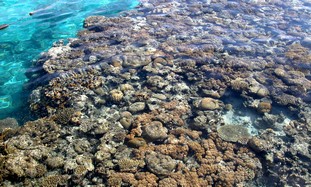 Photo: BiblePlaces.com
Those who come to Eilat might expect a completely secular experience. After all, except for the few biblical references to Eilat as a port, the place seems utterly devoid of anything spiritual. But it’s not that way for me.The times I have been to Eilat cause me to marvel at the contrasts I see there. The monochrome, barren, and blistering hills that surround Eilat contrast wildly with the colorful and vibrant creation that explodes beneath its waters. That vivid difference reminds me of the spiritual life that thrives in the lives of many people who otherwise appear unadorned or even barren. 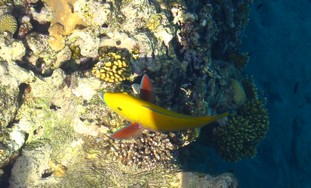 Photo: BiblePlaces.com
Eilat reminds me that there often lies more beneath the surface if we will simply explore. What to do there: Visit the Underwater Observatory, go scuba diving or snorkeling, do some bird watching, or simply sit on the beach and relax. How to get there: From Jerusalem, head west on Route 1 toward the Jericho area and turn south at the BeitHaArava Junction on Route 90. Head south about 3.5 hours! Or just take a flight to Eilat.Read Wayne’s blog and subscribe to his weekly Podcast at www.waynestiles.com.