Several of the e-mails reveal an apparent bias within the DNC for Clinton during her primary campaign against Bernie Sanders. 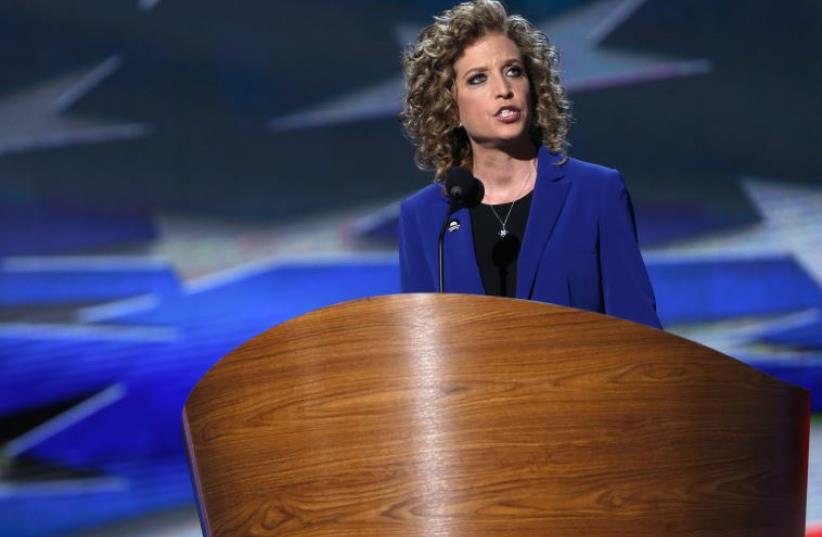 Democratic Party Chairwoman Debbie Wasserman-Shultz
(photo credit: REUTERS)
Advertisement
WASHINGTON -- Debbie Wasserman Schultz will step down as chair of the Democratic National Committee at the end of the party's national convention in Philadelphia this week, she announced on Sunday, just hours before its opening gavel drops."I look forward to serving as a surrogate" for Hillary Clinton, the presumptive Democratic presidential nominee, said Wasserman Schultz (D-FL 23rd District), a prominent Jewish member of the party. "The best way for me to accomplish those goals is to step down." Wasserman Schultz's hasty departure comes amid a massive leak of DNC e-mails released by Wikileaks on Friday. The Clinton campaign says that Russia orchestrated the attack to help the campaign of Donald Trump, Clinton's Republican rival.Several of those e-mails reveal an apparent bias within the DNC for Clinton during her primary campaign against Bernie Sanders, the independent senator from Vermont, who for months claimed the process was stacked in her favor.Sanders renewed his call earlier in the day for Wasserman Schultz's resignation. In her own e-mail exchanges, Wasserman Schultz questioned Sanders' loyalty to the party– he has never registered as a Democrat– and disparaged his campaign's leadership in personal terms.The leak also showed the party's chief financial officer sought to promote a media narrative that Sanders had "skated" on his "Jewish heritage," and suggested that his lack of religiosity would be a political weakness.Wasserman Shultz was the first woman in fifteen years to serve as DNC chair upon her appointment by US President Barack Obama in 2011. She succeeded Tim Kaine, currently US senator from Virginia and Clinton's vice presidential running mate.Obama called her on Sunday afternoon to thank her for "having his back" over the last eight years, the White House said."Her leadership of the DNC has meant that we had someone who brought Democrats together not just for my re-election campaign, but for accomplishing the shared goals we have had for our country," the president said in a statement. "Her fundraising and organizing skills were matched only by her passion, her commitment and her warmth.  And no one works harder for her constituents in Congress than Debbie Wasserman Schultz."