By REUTERS
Vladimir Putin casts his vote 311
(photo credit: REUTERS)
Advertisement
MOSCOW - Russian Prime Minister Vladimir Putin's ruling party could see its vast parliamentary majority cut back on Sunday in elections widely seen as a test of his popularity ahead of an expected return to the presidency early next year.Voters turned out from the Pacific to the Baltic coasts in the world's biggest country where Putin restored central control and revived the economy in a 2000-2008 presidency. He remains by far the most popular politician in the country but there are signs Russians may be wearying of a cultivated strong man image.RELATED:Report: Russia delivers anti-ship missiles to SyriaSome voters expressed disgust with a parliamentary poll they said was likely to be rigged. Others said they backed the United Russia party of Putin, who has continued to exert influence as prime minister since yielding the presidency to Dmitry Medvedev under a constitution forbidding more than two consecutive terms."I support United Russia. I like Putin. He is the strong leader we need in our country," said Nikolai, a 33-year-old customs officer in Vladivostok, a port city of 600,000 people on the Pacific and the biggest city in Russia's Far East. 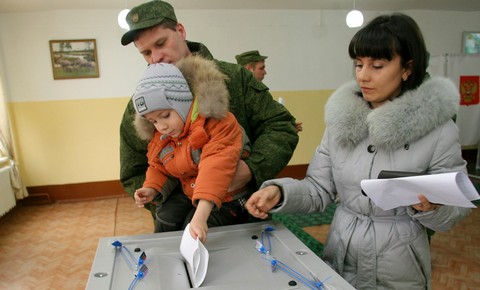 Some said they would vote for Just Russia or the Communists, who retain support largely among poorer sections of the population two decades after the collapse of the Soviet Union and the advent of a free market system.Polls show Putin's party is likely to win a majority but less than the 315 seats it currently has in the 450-seat lower house of parliament, known as the Duma.If Putin's party gets less than two-thirds of seats, it would be stripped of its so called constitutional majority which allows it to change the constitution and even approve the impeachment of the president.