The proposed bill "would prohibit any entity in state government or local government from adopting a rule, ordinance, policy, or procedure that involves the entity in a boycott of Israel. 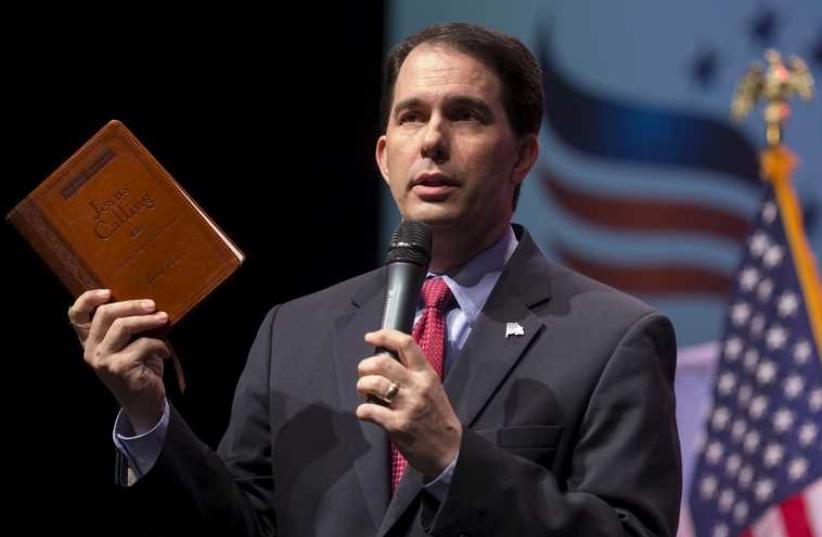 Governor of Wisconsin and potential Republican U.S. Presidential candidate Scott Walker refers to the book "Jesus Calling" at the Iowa Faith and Freedom Coalition's forum in Waukee, Iowa
(photo credit: REUTERS)
Advertisement
Gov. Scott Walker of Wisconsin issued an executive order on Friday barring state agencies from engaging in business with entities that discriminate against Israel.The executive order came ahead of the departure for Israel on Friday of a 15-member trade group led by Walker, which will be in the country through Thursday.“We stand firmly against discrimination in any form and we wholly support our friends in Israel,” said Walker, adding, “I look forward to leading a trade delegation to Israel to foster new trade partnerships between Wisconsin and Israeli businesses.”Wisconsin (population almost 6 million) is the 24th US state to promulgate either a law or an executive order forbidding the state from conduction business with firms engaged in BDS activity targeting Israel.The order states: “Consistent with existing Wisconsin nondiscrimination provisions and regulations governing purchases...agencies may not execute a contract with a business entity if that entity is engaging in a boycott of Israel. Further, agencies shall reserve the right to terminate any contract with a business entity that engages in a boycott of Israel during the term of the contract.”The order says “boycotts based on religion, national origin, ethnicity or residence are discriminatory,” and “the Boycott, Divestment and Sanctions (BDS) movement against Israel serves to inflame conflict; and over 20 states have enacted laws or resolutions against the BDS campaign.”Israel-Wisconsin trade is flourishing, “with Wisconsin exporting over $80 million annually to Israel and importing over $200m. annually from Israel,” according to Walker’s statement.The governor is a Republican who was a presidential candidate in 2016.Walker in his statement expressed support for a state bill that “would prohibit any entity in state government or local government from adopting a rule, ordinance, policy or procedure that involves the entity in a boycott of Israel, or a boycott of a person doing business in Israel or in a territory under Israeli jurisdiction. The bill also requires that state contracts for materials, supplies, equipment and services include a provision that the vendor is not currently participating in and will not participate in a boycott of Israel during the contract.”The legislation was co-authored by Sen. Leah Vukmir (R-Brookfield) and Rep. Dale Kooyenga (R-Brookfield).The Israel Project’s CEO and president Josh Block said, “The Israel Project is grateful to Governor Walker for his leadership in fighting against BDS discrimination. For years, Israel – and only Israel – has been targeted by this deceptive attempt to delegitimize its very right to exist. BDS proponents do not seek a better life for the Palestinians, nor do they aim to create a political environment favorable to a lasting peace between Israel and its neighbors.“Their true aim is the destruction of the Jewish state.”Block added, “From the North to South, in blue [predominantly Democrat] and red [predominantly Republican] states – and with strong bipartisan support – lawmakers in 24 states have now declared BDS a form of discrimination and sent a clear signal that their states will not tolerate or condone taxpayer dollars going to subsidize anti-Israel hate.”Walker’s decision was praised on Twitter by the Israel Action Network.