'Bloodshed will follow if Trump moves US embassy to Jerusalem'

"I believe that any American act of stupidity will ignite the Palestinian territories," says senior Fatah official. 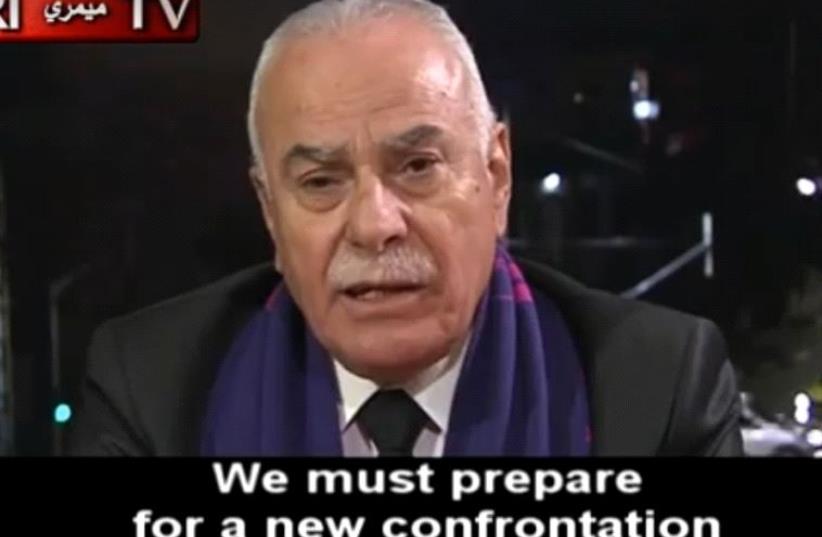 Sultan Abu Al-Einein of the Fatah Central Committee
(photo credit: screenshot)
Advertisement
The Palestinians will start a new violent uprising if Donald Trump's incoming White House administration relocates the US Embassy in Israel from Tel Aviv to Jerusalem, a senior Fatah official indicated this week in an interview translated by . "I believe that any American act of stupidity will ignite the Palestinian territories," Fatah Central Committee member Sultan Abu al-Einein told Egypt's Alghad TV on Sunday.
Fatah Official Sultan Abu Al-Einein on transfer of US embassy to Jerusalem
Al-Einein, an aide to Palestinian Authority President Mahmoud Abbas, also pointed to Israeli "arrogance" and settlement activity along with the potential US maneuver as provoking Palestinian violence."We must prepare for a confrontation with the new US administration, which has clearly and audaciously declared that Israel and its settlements are legitimate and legal," he asserted. The Palestinian official charged that Washington and Jerusalem "will bear responsibility for the return of the bloodshed in the Palestinian territories."The Trump team has said that the US president-elect considers moving the embassy a "very big priority." Throughout his campaign for the presidency, Trump repeatedly said he would move the US Embassy if elected – a political promise past US presidents have frequently made, yet has never been held. Longstanding US policy is to treat the status of Jerusalem as an issue to be settled in final-status negotiations with the Palestinians.Trump's pledge to move the mission has been met with mixed reactions from Israeli officials.Defense Minister Avigdor Liberman has questioned whether it would be wise for Trump to prioritize moving America’s embassy upon taking office. Meanwhile, Israel’s ambassador to the US Ron Dermer has backed the potential move as "a great step for peace."