Dershowitz: ICC will go after Israel if settlement bill passes

Passage into law of controversial legislation would also lead to Obama administration letting an anti-settlement resolution through at the UN, says Dershowitz. 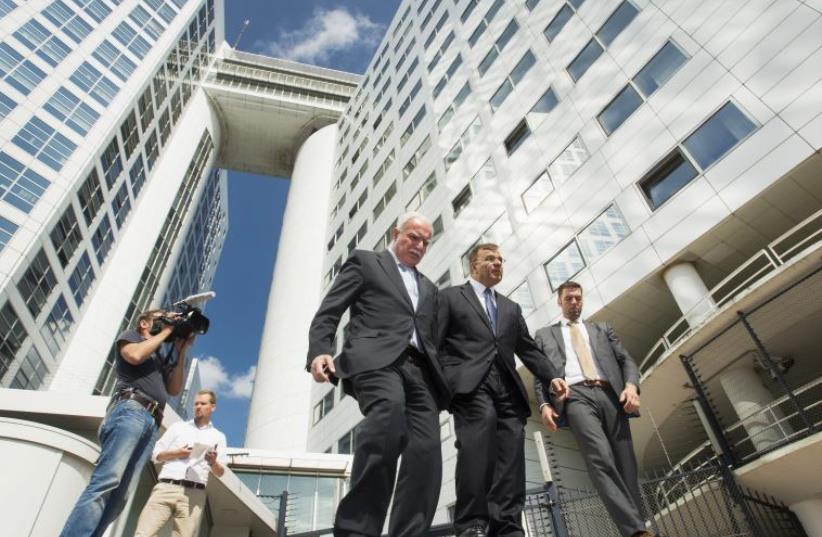 Palestinian Authority Foreign Minister Riad al-Malki (C) leaves the ICC at the Hague [File]
(photo credit: REUTERS)
Advertisement
If the Knesset passes the settlements regulation bill, the International Criminal Court will go after Israelis and the Obama administration will let an anti-settlement resolution through at the UN, Prof. Alan Dershowitz says.Dershowitz made the statement at an event for the Matan Institute for Women’s Torah Studies in Ra’anana on Tuesday night.There is an intense debate in Israel over whether passing the bill to retroactively legalize certain unauthorized outposts built on private Palestinian land in exchange for financially compensating the Palestinians is legal and whether it would bring consequences from the international community, such as provoking the ICC. The original text of the legislation covered the Amona outpost, which the High Court of Justice has ordered demolished by December 25, but the proposed law has since been amended to not cover outposts which the court has ordered must be taken down.In January 2015, the ICC started a preliminary examination of alleged war crimes in connection with the 2014 Gaza war (Operation Protective Edge) and the settlement enterprise, but to date it has not decided whether to open a full criminal investigation, which top Israeli officials worry would have grave consequences.After other wide-ranging remarks, Dershowitz signaled to the crowd that he was about to drop some political bombshells, saying, “The other thing which is going to get controversial, but you don’t bring me not to be controversial... I think that Israel has to take into account world opinion and let me give you a very specific instance.”“If the Amona bill is passed, two things will happen: One, the International Criminal Court, which is now reluctant to take jurisdiction, will take jurisdiction. It will be a provocation,” he asserted.Continuing, the famed jurist stated, “Second, if the Amona bill were to be passed in the next two weeks, the president of the United States would have no choice but to say I’m not going to veto the French Security Council resolution condemning Israeli settlements.”Addressing the crowd directly, the professor said, “You cannot ignore that reality. You can disagree with it. And you should ignore the reality if it affects Israel’s security. But you cannot ignore that reality when it comes to political considerations around the settlements.And that’s a tough message for me to give you, but I’m giving it to you from my heart.”Dershowitz then continued to take issue with some of the premises of the settlements regulation bill, saying, “There is no justification under Israeli law for creating illegal settlements.So that’s the first thing that should stop. Second of all, settlements on land owned by Palestinians should be stopped.Third, it’s not enough to take land and give payment for that.That doesn’t satisfy international law.”Explaining his views on the settlements more generally, he said, “I really do think that although I support the continuation of the current settlement blocs and the keeping of the settlement blocs in any peace process and certainly those settlement blocs that are close to Jerusalem – nobody is giving up Ma’aleh Adumim and Gilo and Efrat and the Etzion Bloc – I do think it’s a mistake, and I think there are many Israelis, most Israelis and I think even some in the government think it’s a mistake, to start building extensively outside of the settlement blocs.”