Partner Communications said it had no business activity in Gaza, pointing out that the pre-paid cards were bought from independent distributors in Israel. 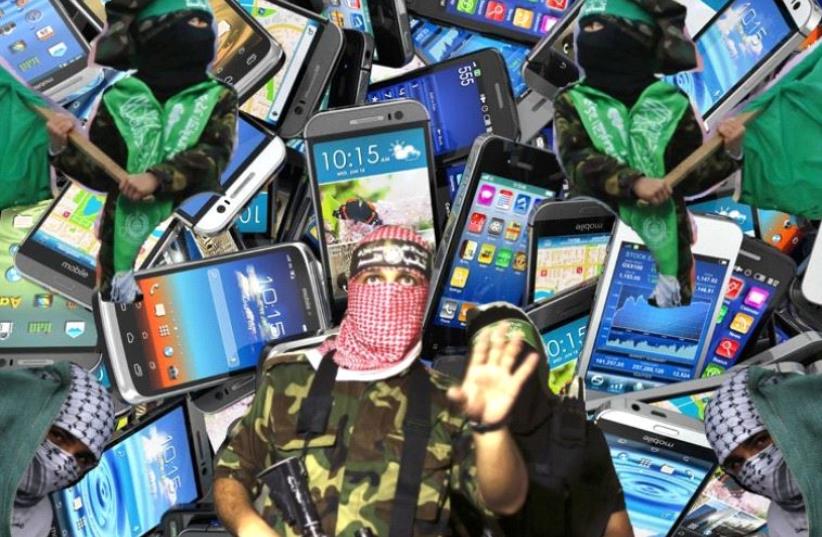 Hamas members, Smartphone background
(photo credit: REUTERS)
Advertisement
Hamas-run authorities in Gaza are trying to stop the sale and distribution of pre-paid SIM cards from Israeli cellular providers, arguing the cards pose economic and security risks and allow users to access "immoral" content.Officials from the Palestinian telecommunications and interior ministries, which are overseen by Hamas, the Islamist group that controls Gaza, said there have always been restrictions on the use of Israeli SIMs in the territory, but now they are determined to stamp them out entirely.Cards from Israel's two biggest providers, Cellcom and Partner, can be found for sale under the counter in kiosks and shops in parts of Gaza, where they are brought in by businessman and traders returning from trips to Israel."These companies are not registered in Palestinian areas and therefore we can't allow them to operate," Zeyad Al-Sheikh Deeb, director of licensing at the Gaza telecommunications ministry, told Reuters. "They represent an unfair competition to national companies and cause damage to our economy."Partner Communications said it had no business activity in Gaza, pointing out that the pre-paid cards were bought from independent distributors in Israel. Cellcom said it did not market products in Gaza.Neither company operates in Gaza, where Palestinian firm Jawwal, owned by PalTel, runs the only network. But because Partner and Cellcom have towers just across the border in Israel, their 3G and 4G signals can be reached from parts of the territory that are closer to the frontier or on high ground.Cellcom's signal is said to be more reliable, making its SIMs more popular. For 50 Israeli shekels ($13), Gazans can pick up a SIM giving them 5,000 minutes of talk-time and potentially unlimited Internet access via a virtual private network.By comparison, a Jawwal SIM for the same price provides just 130 minutes of talk-time and more restricted Web access.Vendors in the Palestinian enclave who stock Israeli cards said Hamas had been trying to crack down for years but had renewed its push. Those caught selling are threatened with "sanctions", they said."We got a new warning," said one salesman in Gaza city, asking not to be identified for fear of repercussions. "Two weeks ago I got a police order not to sell Cellcom SIMs."FREER ACCESSIyad Al-Bozom, spokesman for the interior ministry in Gaza, said Israeli cards presented a number of problems. As well as shifting users away from the Palestinian network, undercutting its revenue, they carry security risks, he said."Conversations made via these cards can be stored on Israeli servers and used by the occupation," he told Reuters, referring to Israel's presence in all of historic Palestine, which Hamas regards as entirely occupied. Gaza remains blockaded by Israel 11 years after Israeli forces withdrew from the coastal strip."Israeli intelligence officers have also used these SIM cards to contact some collaborators," he added, confirming that the ban order had been reaffirmed in recent days.Israeli security sources say Israel has long been able to eavesdrop on any conversations in the Palestinian territories, whatever the network, especially among suspected militants.For Palestinians, whether in Gaza or the West Bank, the advantages of having an Israeli SIM are multiple.It gives them a back-up network, allows them to more easily speak to Israeli business counterparts, or relatives who are being treated in Israeli hospitals, and because the Israeli networks are new generation, there is better Internet access.Some Gazans use a Cellcom SIM and download a Virtual Private Network app that allows them to get unlimited, free-of-charge service. That can enable them to evade restrictions on sites that contain pornography or other unacceptable content."This is an additional reason to ban (Israeli SIMs)," said Deeb, the telecommunications ministry official.There are an estimated 370,000 Israeli SIM cards being used by Palestinians in the West Bank, among a population of 2.8 million. Equivalent usage figures for Gaza were not available.While the Hamas-led authorities may succeed in stopping the sale of Israeli SIMs in Gaza, the Palestinian Authority in charge in the West Bank would have much less success since there is freer passage of goods and people into Israel.