A flotilla of Gazan protesters seeking to breach Israel's naval barrier, May 29, 2018 (Reuters)
Advertisement
The Israel Navy enforced its maritime blockade of the Gaza Strip on Tuesday, stopping a boat of 17 Gazan protesters seeking to breach Israel’s naval barrier nine nautical miles off the Gaza coast.Organizers of the protest, affiliated with the “Great March of Return,” said a large Gazan fishing boat, the Al-Hurriyah (Liberty), would carry a group of Gazans hoping to receive medical treatment or study abroad in an attempt to challenge the maritime blockade.The boat’s intended destination was said to be the port of Limassol, Cyprus, and it set off from a Gaza port surrounded by dozens of smaller boats manned by supporters of the effort. Social media images showed protesters setting an Israeli monitoring buoy on fire.“The halting of the boat was executed without any special events,” said the IDF, stating that the boat will be towed to Israel’s naval base in Ashdod. “If necessary, the IDF will provide medical support to treat the sick and disabled on the boat... and the Palestinians will later be returned to Gaza.“The terrorist organization Hamas, which stands behind the attempt to breach the maritime blockade, is seeking to produce a cynical display that will only harm the civilians of Gaza and the aid that is brought into Gaza by Israel and other countries.”The “flotilla,” say organizers, marks eight years since Israeli naval commandos raided the Turkish ship MV Mavi Marmara, one of six ships of the “Gaza Freedom Flotilla,” leaving nine activists on board dead after violent clashes broke out. Ten Israeli Shayetet 13 commandos were wounded, one seriously. 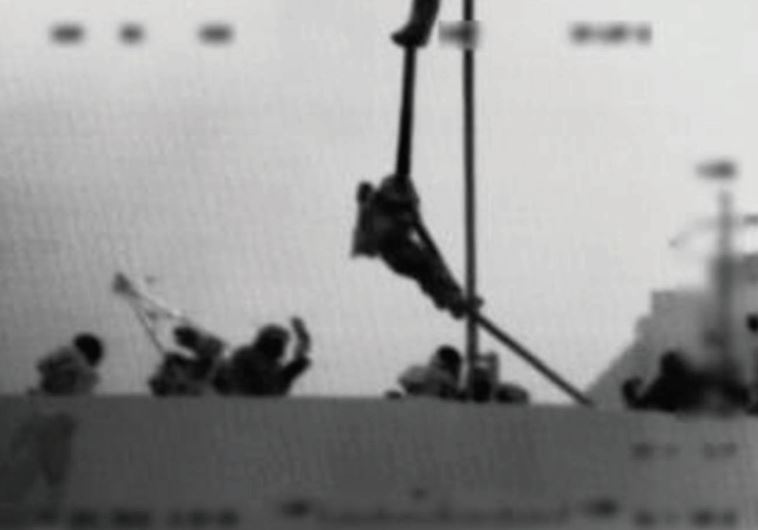 An IDF soldier rappels onto the Mavi Marmara during the Navy raid in 2010 (IDF)
Since Hamas’s takeover of the Gaza Strip in 2007, Israel has imposed a strict land, sea and air blockade on the Gaza Strip, amid concerns of weapons trafficking. Egypt rarely opens its single crossing with Gaza.Activists from Hamas, Islamic Jihad and the Popular Front for the Liberation of Palestine attended an opening ceremony for the “flotilla.” Images of the boat prior to departure showed Hamas officials on board.Jason Greenblatt, the US special representative for international negotiations, condemned the flotilla as an example of Hamas “cynically risking” the lives of Palestinians in Gaza.“Shame on all involved in inciting the so-called ‘reverse flotilla’ today,” Greenblatt wrote on Twitter.“Hamas treats this like a play being acted out for a live media audience. But these are real lives Hamas is cynically risking, in a grim bid to hold on to power,” he said. “This flotilla is one more step backwards for Hamas, and their leadership is dragging the Palestinians of Gaza with them.”Organizers of the flotilla reportedly warned participants to expect Israel to use force to prevent the “flotilla” from breaching the blockade if necessary.
People watch as a boat prepares to set sail in attempt to break Israel's maritime blockade on Gaza, May 29, 2018. (Reuters)
On Sunday, a “Freedom Flotilla” consisting of four ships seeking to break Israel’s maritime blockade docked in the German city of Wilhelmshaven, one of several European stops on its way to Gaza. It aims to reach the Hamas-controlled enclave in late July. The flotilla’s next destination is Amsterdam.Organizers of the European-based flotilla said they saluted the “humanitarian mission” carried out by Tuesday’s “flotilla” participants, calling on governments to ensure safe passage for the boat.A United Nations review of Israel’s maritime blockade, published in 2011 following the raid on the Mavi Marmara, held that the blockade was both legal and appropriate, but deemed Israeli troops to have used “excessive and unreasonable force” to seize control of the boat.In November 2017, the International Criminal Court chief prosecutor shut the door permanently on war crimes allegations relating to the flotilla raid, effectively ending any last threat of prosecution following the incident.