One of last Sobibor death camp survivors dies at 90

Philip Bialowitz was part of the small group of Jews who, in 1943, staged a revolt, setting close to 300 prisoners free from the death camp in Nazi-occupied Poland. 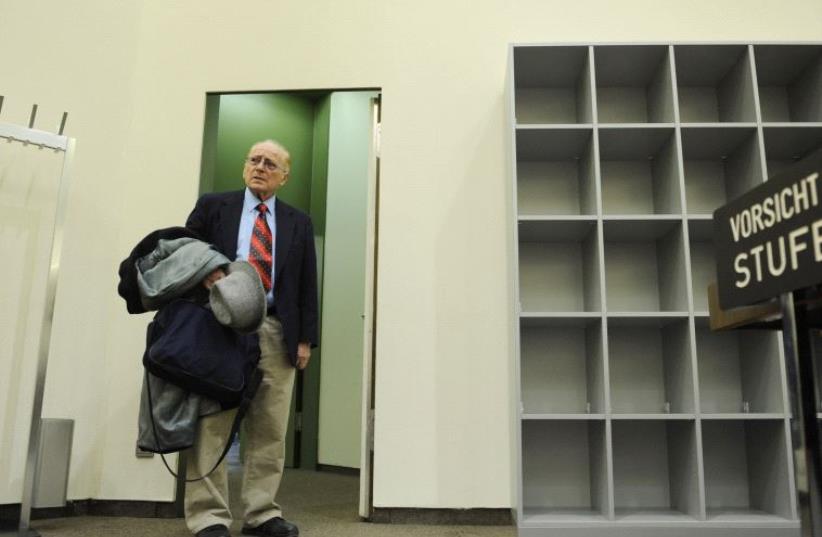 Philip Bialowitz before the continuation of the trial against accused Nazi death camp guard John Demjanjuk in Munich, January 20, 2010
(photo credit: REUTERS)
Advertisement
Philip Bialowitz, one of the last four survivors of the Sobibor death camp, died on Saturday at age 90 in Florida.Bialowitz was part of the small group of Jews who, in 1943, staged a revolt in Sobibor, setting close to 300 prisoners free from the death camp.According to his son, Joe Bialowitz, Philip was the last remaining Polish Jew to have survived Sobibor.“When the revolt at Sobibor began, he was standing with his fellow prisoners when he saw the revolt’s two leaders stand upon a table and call out to everyone: ‘If you survive, bear witness! Tell the world about this place!’” Joe wrote on Facebook in a post announcing his death.“Philip devoted much of the rest of his life to performing this sacred duty. He traveled the world, relating his eyewitness account to thousands of children and adults, and honoring the memories of the 250,000 Jews who perished and the few who survived thanks to what he called ‘the fighting spirit of the Jewish people.’” After escaping Sobibor, Bialowitz said he ran into a group of Polish partisans, who were not happy to be harboring Jews. So he escaped again, and ending up hiding out the rest of the war along with his brother with a Polish farmer called Mazurek.
Philip Bialowitz in 2010 (Reuters)
Bialowitz later penned a memoir about his experiences, entitled A Promise at Sobibór: A Jewish Boy’s Story of Revolt and Survival in Nazi-Occupied Poland. Well into his 80s, Bialowitz continued to tour the world, telling the story of his horrific experiences.“Philip would often tell people that he had ‘a mission to perform,’” Joe wrote.“While not always easy, he faithfully and vigorously fulfilled his obligation to the victims and heroes of Sobibor.”The Museum of the History of Polish Jews developed a curriculum for Polish schools based on Bialowitz’s book, according to his family.In 2010, at the age of 84, Bialowitz traveled to Munich to testify against Nazi death-camp guard John Demjanjuk. He told JTA at the time that he “did not remember the faces of all the guards. But I know they sometimes surpassed the Germans in atrocity.”In a 2014 interview with Der Spiegel, Bialowitz said, “I swore that I would continue to go around and tell my story about the Sobibor death camp to young people for as long as I was still able to. We cannot allow what happened back then to be forgotten.”He added: “I hope God gives me a few more years. But one day no one will be left to tell their stories.”Jonny Daniels, founder of the Holocaust commemoration foundation From the Depths, said he had the honor to meet Bialowitz many times, “at Treblinka extermination camp and most memorably at Chabad in Warsaw, where I learned of his love of hazzanut, Jewish music. He always had a smile on his face and was always so open and willing to speak of his difficult past. Now is our turn to stand as his witness.”According to the Grandchildren of Holocaust Survivor NGO, three Sobibor survivors remain: Selma Engel in the US, Arkady Wajspapier in Russia, and Semion Rosenfeld in Israel.Bialowitz, who is survived by his four remaining children, was laid to rest in New York on Monday afternoon. A eulogy was scheduled to be delivered by the Chief Rabbi of Poland Michael Schudrich.