Two-thirds of Millennials interviewed, between the ages of 18 and 34, could not identify what Auschwitz is. 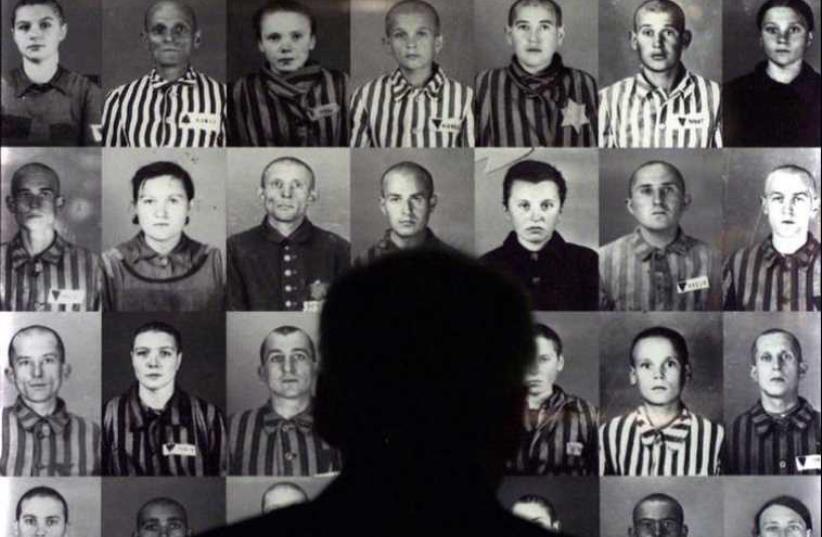 A man looks at photographs of Hungarian Jews held at the Auschwitz Concentration Camp during World War II
(photo credit: REUTERS)
Advertisement
Forty-one percent of Americans don’t know what Auschwitz was, according to a comprehensive national survey of Holocaust awareness and knowledge among US adults.The survey, to be released Thursday, which is Holocaust Remembrance Day, by the Conference on Jewish Material Claims Against Germany (Claims Conference), found that there are critical gaps in Americans’ awareness of basic facts and in their detailed knowledge of the Holocaust, awareness and knowledge that deteriorate in the younger generations.Two-thirds of Millennials interviewed, between the ages of 18 and 34, could not identify what Auschwitz is.Claims Conference Board member Matthew Bronfman led a task force comprising Holocaust survivors as well as representatives from museums, educational institutions, and leading nonprofits in the field of Holocaust education, such as Yad Vashem, the United States Holocaust Memorial Museum, the Claims Conference, the Jewish Agency and George Washington University.The study found that 11% of US adults and over one-fifth of Millennials (22%) hadn’t heard, or were not sure if they had heard, of the Holocaust.While approximately six million Jews were exterminated in the Holocaust, nearly one-third of all Americans (31%) and over four in every 10 Millennials (41%) believed that two million Jews or less were killed during the Holocaust.Almost half of US adults (45%) and Millennials (49%) could not name one of the over 40,000 concentration camps and ghettos in Europe during the Holocaust.Moreover, most Americans (80%) had not visited a Holocaust museum.“The study found significant gaps in knowledge of the Holocaust,” Bronfman said. “We must take a look at these results and determine where and how best we can begin teaching the next generation these critical lessons which must resonate for decades to come.”In addition, a significant majority, 70%, of American adults believed that, today, fewer people care about the Holocaust, and more than half of Americans, 58%, believed that “something like the Holocaust could happen again.”Claims Conference president Julius Berman remarked: “On the occasion of Yom Hashoah [Holocaust Remembrance Day], it is vital to open a dialogue on the state of Holocaust awareness, so that the lessons learned inform the next generation.We are alarmed that today’s generation lacks some of the basic knowledge about these atrocities.”The Claims Conference, however, also highlighted some encouraging results of the survey. In particular, there are key findings underscoring the desire for Holocaust education.More than nine out of every 10 respondents (93%) believed all students should learn about the Holocaust in school. Eight out of 10 respondents (80%) said it is important to keep teaching about the Holocaust so it does not happen again.“This study underscores the importance of Holocaust education in our schools,” said Greg Schneider, executive vice president of the Claims Conference.“There remain troubling gaps in Holocaust awareness while survivors are still with us; imagine when there are no longer survivors here to tell their stories. We must be committed to ensuring [that] the horrors of the Holocaust and the memory of those who suffered so greatly are remembered, told and taught by future generations.”The Holocaust Knowledge and Awareness Study was commissioned by the Claims Conference, and data were collected and analyzed by Schoen Consulting, with a representative sample of 1,350 American adults via landline, cellphone and online interviews.