"The wealth of inscriptions from the cemeteries attests to the strong Jewish presence and the city’s social elite in the Late Roman period," says archaeologist. 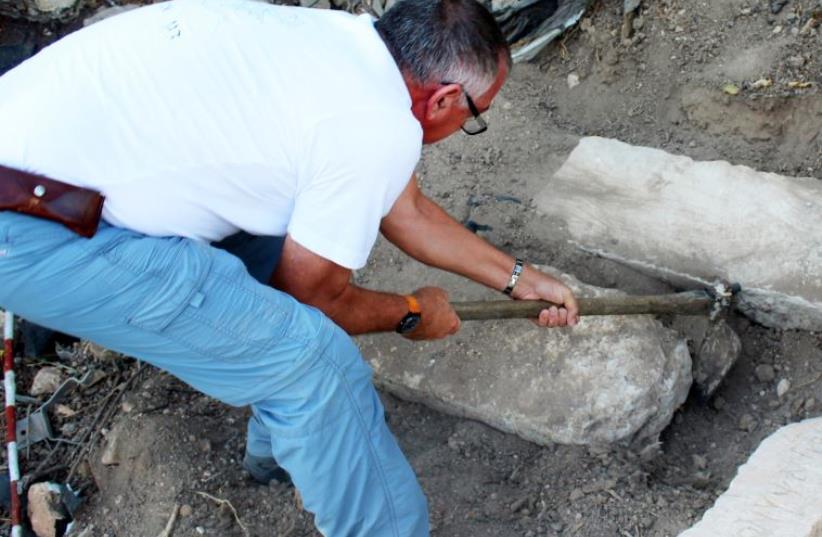 Inscriptions from cemetery
(photo credit: MIKI PELEG/IAA)
Advertisement
Three 1,700-year-old funerary inscriptions referring to rabbis written in Aramaic and Greek were recently unearthed in Moshav Tzipori, in the Galilee, the Antiquities Authority announced on Wednesday.The finding was made following a joint effort carried out by residents of the moshav, researchers from the Kinneret Institute for Galilean Archeology of the Kinneret Academic College, and the authority.According to the authority, two Aramaic inscriptions mention individuals referred to as rabbis, who were buried in the western cemetery of Tzipori, although their names have yet to be deciphered.“The importance of the epitaphs lies in the fact that they reflect the everyday life of the Jews of Tzipori and their cultural world,” said Dr. Moti Aviam of the Kinneret Institute for Galilean Archeology.“Researchers are uncertain as to the meaning of the term ‘rabbi’ at the time when Rabbi Yehuda Hanasi resided in Tzipori together with [other] Tannaim, and after him by Amoraim, the large groups of sages who studied in the city’s houses of learning.”A notable surprise in the newly discovered inscriptions, Aviam said, is that one of the deceased was named “the Tiberian.”“This is already the second instance of someone from Tiberias being buried in the cemetery at Tzipori,” the researcher said. “It is quite possible that Jews from various parts of the Galilee were brought to Tzipori to be buried in the wake of the important activity carried out there by Rabbi Yehuda Hanasi.”Another possibility, Aviam postulated, is that “the man moved to Tzipori and died there, but wanted to be remembered as someone who originally came from Tiberias.”“In the second Aramaic epitaph the word ‘le’olam’ [forever] appears for the first time in inscriptions found at Tzipori,” he said.“The term ‘le’olam’ is known from funerary inscriptions in Beit She’arim and elsewhere, and means that the deceased’s burial place will remain his forever, and that no one will take it from him. Both inscriptions end with the Hebrew blessing ‘shalom.’” Additionally, the Greek inscription mentions the name Yose, which was very common among Jews living in Israel and abroad, said Aviam.To date, 17 funerary inscriptions have been documented in the Tzipori study, most of them written in Aramaic, which was the everyday language of Jews in Israel at that time, the authority said.“Contrasting this are the funerary inscriptions found in Tiberias, the second capital of the Galilee, which were mainly written in Greek,” said Aviam.“Several of the ancient inhabitants from Tzipori are mentioned in these inscriptions, which include the names of rabbis, and often have the names of the professions they were engaged in. Aramaic was the common language used by the Jews in the period of the Mishna and Talmud, but some of them also spoke and read Greek, and thus there are also funerary inscriptions in that language.”Tzipori was the first capital of the Galilee from the time of the Hasmonean Dynasty until the establishment of Tiberias in the first century CE. The city continued to be central and important later on, and was where Rabbi Yehuda Hanasi resided and compiled the Mishna.“Jewish life in the city was rich and diverse, as indicated by the numerous ritual baths [mikvaot] discovered in the excavation,” continued Aviam, “while at the same time, the influence of Roman culture was also quite evident, as reflected in the design of the town with its paved streets, colonnaded main roads, theater and bathhouses.”“The wealth of inscriptions from the cemeteries attests to the strong Jewish presence and the city’s social elite in the late Roman period,” he added.The inscriptions will be studied by a team of researchers, including Aviam, Aharoni Amitai, and the historian Dr.Jacob Ashkenazi of the Kinneret Institute for Galilean Archeology, and Miki Peleg, the Lower Galilee district archeologist of the Antiquities Authority.“This joint effort is also likely to lead to new discoveries soon,” Aviam added, noting that upon completion of their research with the Kinneret Academic College, the authority will present the inscriptions to the general public.