Archeological exhibit shows the end of paganism in Israel

Chronicles society that worshipped Greco-Roman gods to one that adopted Christian faith.

By DANIEL K. EISENBUD
DECEMBER 25, 2017 16:47
An anti-indigestion talisman (left) combined with pendants with various animals.
(photo credit: COURTESY OF DR. MICHAEL EISENBERG)
An amulet, a painting depicting the Greek goddess Tyche, and a figurine celebrating the alcohol-soaked processions devoted to the god of wine Dionysus are now on display telling the story of ancient Hippos during its transition from the pagan Roman period to the Christian-Byzantine era.Situated to the east of the Sea of Galilee, Hippos was founded in the second century BCE and destroyed by the devastating earthquake of 749 CE, also known as the 749 Galilee Earthquake.Over the past 18 years, the site which lies within the Nature and Parks Authority’s Sussita National Park has been excavated and explored by researchers led by Dr. Michael Eisenberg from the Institute of Archaeology at the University of Haifa.Now, Eisenberg and researchers from the university are displaying many rare antiquities and relics unearthed at the site in an exhibition called “Before the Earth Shook: The Ancient City of Hippos-Sussita Emerges.”“The excavations have yielded many impressive and unique findings over the years, both from the period when the city was still pagan and from the Byzantine and Umayyad periods, when Hippos had a clear Christian majority,” said Eisenberg on Monday.“For the first time, the new exhibition at the Hecht Museum presents the story of this transition from a society that worshiped the classic Greco-Roman gods, to one that adopted the Christian faith. The case of Hippos clearly shows how in the center of the city, the residents – including Christian clergy – openly and publicly continued to use the pagan emblems of the Roman era.”According to Eisenberg, the most fascinating findings include a trove of 24-karat gold buckles and an amulet against indigestion.“The amulet, with dimensions of 2.2 cm. x 2.4 cm., is made from hematite and set into a gold pendant bearing an inscription in Greek with the command ‘digest!’” he said. 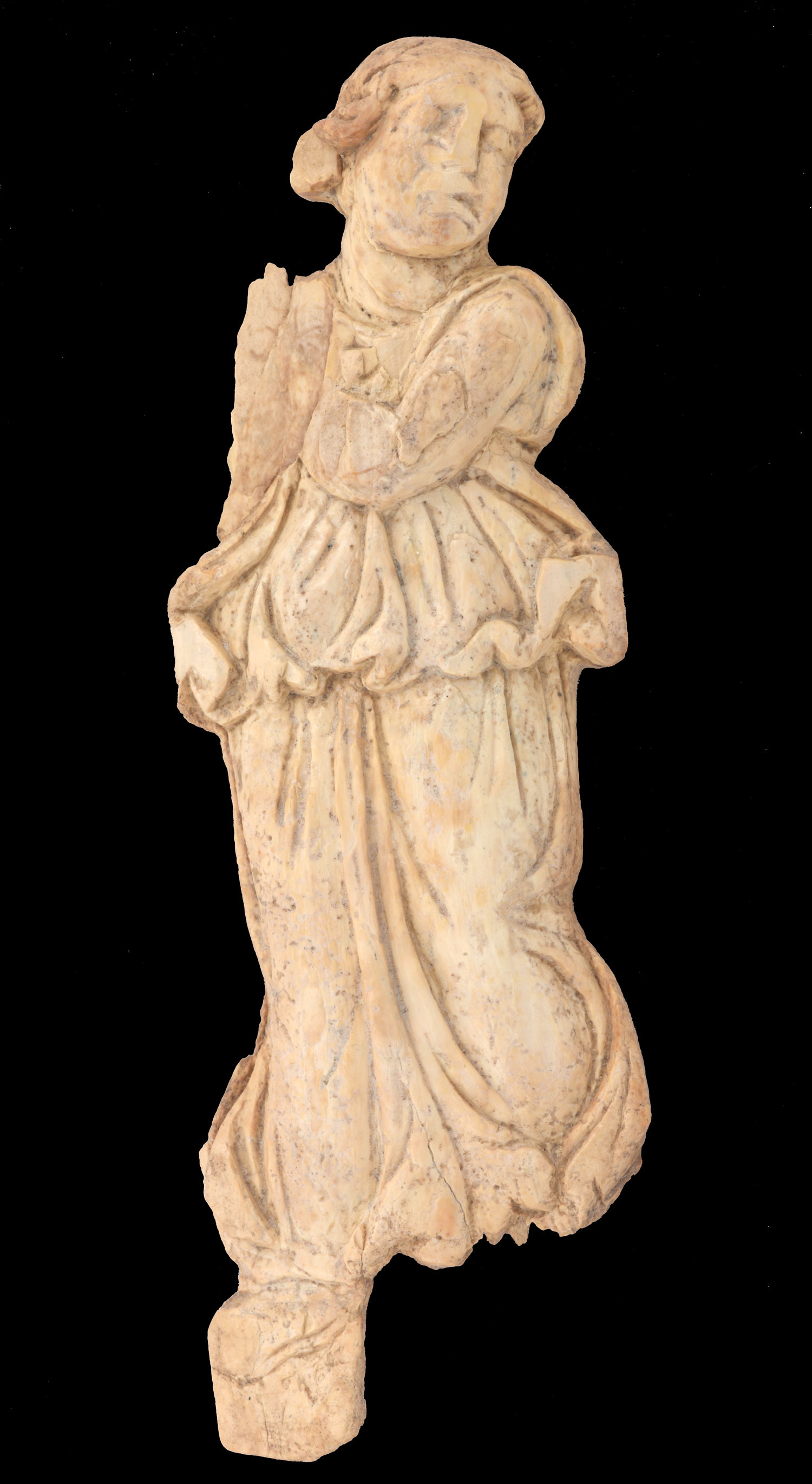 A bone figurine of a woman dancing (COURTESY DR. MICHAEL EISENBERG)It is from the Roman period during the 3rd to 4th century CE, but was set into the gold pendant during the Byzantine period during the late 6th century CE, Eisenberg noted.“The researchers found the pendant in a stratum dated to the early 8th century CE in the northeast church,” he continued. “In other words, some three to four centuries after the Roman Empire embraced Christianity.”Together with associated findings, the researchers believe that the item was probably worn by an important Christian cleric who continued to use it for its original purpose of “warding off indigestion.”Another finding on display at the exhibition includes a small, carved figurine made of bone, approximately 12 cm. in height, depicting a dancing woman.“On closer inspection, the woman turns out to be a ‘maenad’ – one of the regular members of the retinue that accompanied the processions devoted to the god of wine Dionysus,” said Eisenberg.“The figurine, which was found in a building adjacent to the church and has been dated to the Roman-Early Byzantine era, was probably set in a wooden box or casket featuring other images of the processions to Dionysus that have not survived,” he continued.“The processions to Dionysus – who was usually accompanied by the dancing maenads – was dominated by ecstatic dancing, drinking to excess, debauchery and rich manifestations of sexuality. Yet, now we find one of the images most closely identified with this procession and licentiousness in a building next to a church.”Eisenberg pointed out that in addition to the small amulet and figurine, the site has yielded even more powerful testimony to the integration of the emblems of the pagan past in the Christian present.“On the wall of a home not far from the northeast church, an ashlar was uncovered bearing a fresco depicting the goddess of fortune Tyche, Fortuna in the Roman pantheon,” he said. “Tyche is shown wearing a mural crown, which naturally represents the city walls of Hippos.”A fresco of the goddess Tyche, with crowned walls for her head.The northeast church and adjacent building were excavated by a delegation from Concordia University in St. Paul, Minnesota, headed by Prof. Mark Shuler.Eisenberg explained that Tyche was the goddess who protected Hellenistic and Roman Hippos.“She appears on Roman coins from Hippos holding the reins of a horse, or carrying a horse in her palm – both symbols of her role as the protector of the city,” he said, noting that the motif of Tyche as the protector of Hippos was chosen as an emblem for the new exhibition.“During the Byzantine period, Tyche became a municipal emblem embodying a local patriotism that had deep roots in the classical tradition. As time passes following the transition to Christianity, Tyche and the other former religious emblems probably lose their ritualistic characteristics and become cultural symbols that continue to accompany Hippos, until the city was devastated and abandoned following the earthquake of 749,” he added.Because Sussita National Park has not been prepared for organized visits by the public, Eisenberg said the new exhibition at the University of Haifa’s Hecht Museum will offer an exceptional opportunity to “see a city that was founded over 2,000 years ago and has now come back to life following 18 years of archeological studies.”The exhibition will remain on display at the Hecht Museum through next year.