Name of Thutmose III, one of most prominent pharaohs in Egypt’s New Kingdom, inscribed on 3,200-year-old relic discovered by girl, 12, at Temple Mount Sifting Project 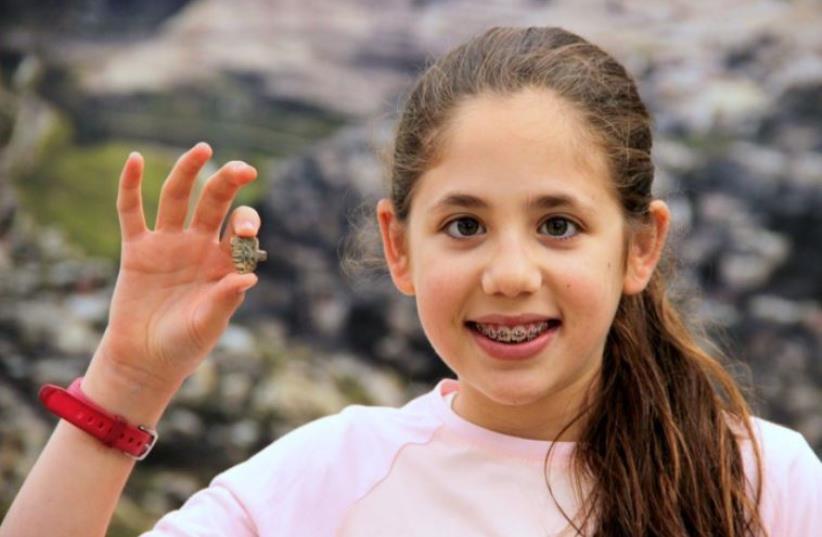 Neshama Spielman, 12, poses with the rare amulet she discovered while volunteering at the Temple Mount Sifting Project.
(photo credit: ADINA GRAHAM)
Advertisement
Just a few days before Passover, a 3,200-year-old Egyptian relic, discovered by a girl of 12 from Jerusalem, serves as a timely reminder of a distant, bitter-sweet past.Neshama Spielman, who recently participated in the Temple Mount Sifting Project – which allows volunteers to sort through tons of earth illegally discarded from the site in 1999 – discovered the amulet bearing the name of a pharaoh.The Ir David Foundation, which co-sponsors the project based in the capital’s Tzurim Valley National Park, announced on Tuesday that the pharaoh’s name turned out to be Thutmose III, of Egypt’s 18th Dynasty, who reigned between 1479 and 1425 BCE.“While I was sifting, I came across a piece of pottery that was different from others I had seen, and I immediately thought that maybe I had found something special,” said Spielman of the discovery on a slope of the Mount of Olives“It’s amazing to find something thousands of years old from ancient Egypt all the way here in Jerusalem! Celebrating Passover this year is going to be extra meaningful to me.” 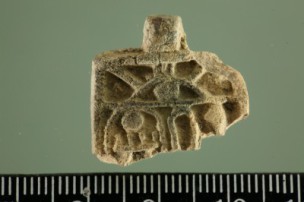 “While I was sifting, I came across a piece of pottery that was different from others I had seen, and I immediately thought that maybe I had found something special,” said Spielman of the discovery on a slope of the Mount of Olives.“It’s amazing to find something thousands of years old from ancient Egypt all the way here in Jerusalem! Celebrating Passover this year is going to be extra meaningful to me.”The project, co-founded by archeologists Prof. Gabriel Barkay and Zachi Dvira in 2004 to reclaim, analyze and document the earth discarded by the Wakf Muslim religious trust, is conducted under the auspices of Bar-Ilan University, with the support of Ir David and the Israel Nature and Parks Authority.According to Barkay, professor emeritus at the Hebrew University, Thutmose III was one of the most prominent pharaohs in Egypt’s New Kingdom.“He is credited with establishing the Egyptian imperial province in Canaan, conducting 17 military campaigns to Canaan and Syria, and defeating a coalition of Canaanite kings at the city of Megiddo in 1457 BCE,” said Barkay.“Thutmose III referred to himself as ‘the one who has subdued a thousand cities,’ and it is known that for more than 300 years, during the Late Bronze Age, Canaan and the city state of Jerusalem were under Egyptian dominion, likely explaining the presence of this amulet in Jerusalem.”The small antiquity, which is in the shape of a pendant, and missing its bottom section, measures 21 mm. wide, 4 mm.thick, and 16 mm. long.“A loop on top allowed it to be strung and hung on the neck,” said Barkay.“The raised decoration displays a cartouche, an oval frame surrounding Egyptian hieroglyphics bearing the name of the Egyptian ruler.Above the oval framing is the symbol of an eye, and to its right are remnants of yet another hieroglyphic symbol depicting a cobra, of which parts of the head and tail are preserved.”While Egyptian scarabs bearing the name of Thutmose III have previously been discovered in Jerusalem, Barkay noted that Spielman’s discovery represents the first time his name has been found in the capital adorned on an amulet.“Objects bearing the name of Thutmose III continued to be produced in Egypt long after the time of his reign, reflecting the significance and lasting impression of this king,” he said.Dvira added that the amulet can be reconstructed based on the discovery of an identical pendant found in Nahal Iron, in northern Israel, in 1978.“Along with that pendant, which also bore the name of Thutmose III, was another amulet bearing the name of King Seti I, an Egyptian pharaoh who ruled Egypt during the late 14th – early 13th centuries BCE,” said Dvira.“This seems to indicate that both pendants date to the same time period, namely the late 14th – early 13th century BCE.”The research and analysis of the amulet was conducted by Israel Antiquities Authority’s Egyptologist, Baruch Brandl.The Temple Mount Sifting Project was initiated in response to the illegal removal of tons of ancient soil from the contested holy site by the Wakf in 1999, without any archeological supervision.“Since the Temple Mount has never been excavated, the ancient artifacts retrieved in the sifting project provide valuable and previously inaccessible information,” said Dvira.“The many categories of findings are among the largest and most varied ever found in Jerusalem. Even though they have been extracted from their archeological context, most of these artifacts can be identified and dated by comparing them with those found at other sites.”Since the project’s inception in 2004, more than 170,000 volunteers from Israel and across the globe have taken part in the sifting, representing an unprecedented phenomenon in the realm of archeological research.Presently, more than half a million finds are still waiting to be processed and analyzed in the project’s laboratory for scientific publication.In the meantime, Assaf Avraham, archeologist and director of the Jerusalem Walls National Park, noted the significance of the finding’s timing.“A discovery such as this is particularly symbolic at this time of year, with the Passover festival just a few days away, and represents greetings from the ancient past,” he said.