"The forced conversions of Jews which took place on the Iberian Peninsula from the 14th century onwards left an indelible mark on Jewish history." 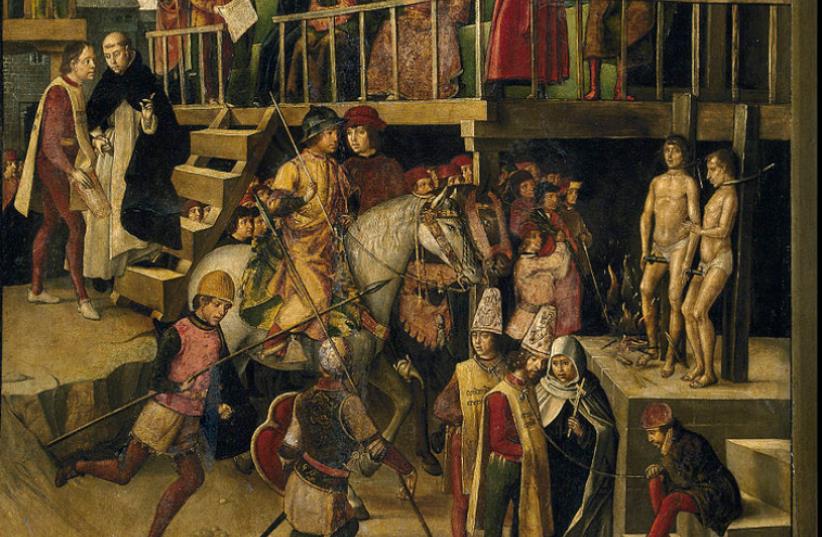 Inquisition and the auto-de-fa
(photo credit: Wikimedia Commons)
Advertisement
For the 2,000 years of exile and dispersion before the reestablishment of sovereignty in our land, the Jewish people knew many catastrophes and disasters. The overwhelming majority entailed a massive annihilation of Jews, most infamously during the Holocaust.However, one series of events did not end in the physical destruction of Jewish bodies, but of Jewish souls, disconnecting untold hundreds of thousands from our people.The forced conversions of Jews which took place on the Iberian Peninsula from the 14th century onwards left an indelible mark on Jewish history.Nevertheless, as opposed to many other crimes committed against the Jews, the historic injustice of these forced conversions is starting to be mitigated as tens of millions of their descendants are, thanks to modern technology including the Internet and advances in genealogy and the understanding of DNA, discovering hidden Jewish roots, and many are seeking solutions.The gauntlet has been laid down for Israel, as the homeland of the Jewish people, and for the Jewish world to welcome and help our lost brothers and sisters as they rediscover the heritage that was stolen from their ancestors.That is why we are convening next week, for the first time, an official Knesset Conference for the Reconnection with the Descendants of Spanish and Portuguese Jewish Communities (otherwise known as Bnei Anusim, Marranos and Conversos), which will be followed up by an ongoing, official Knesset Caucus on the issue.We have invited senior political, diplomatic, academic, religious and Jewish organizational leaders to take part in this historic conference.To shape an appropriate response to this welcome phenomenon we need a truly holistic response which engages the Jewish world and creates a global movement the likes of which has not seen for a generation or more.Jewish law demands such a response, with dozens of rabbis throughout history, including Rabbi Yosef Caro (1488-1575), author of the Shulchan Aruch code of Jewish law, and Rabbis Aaron Soloveitchik and Ovadia Yosef in the modern era, stating that the Bnei Anusim are part of our people.Furthermore, the prophet Ovadia spoke about the restoration of the descendants of Spanish and Portuguese Jewish communities as a necessary fulfillment of the return to our ancestral homeland.The Jewish people will face many grave challenges in the years ahead and the decisions we make today will shape our future.As the foremost demographer of the Jewish people, Prof. Sergio DellaPergola, wrote recently, the Jewish people is at a crossroads between an optimistic and a pessimistic future.An optimistic projection of our Jewish future is one which includes reconnecting with the Bnei Anusim, he wrote Della- Pergola.This historic reconnection can have many benefits, including in the diplomatic, political, economic and demographic spheres, and can help us in the fight against anti-Semitism, including combating the nefarious assault on Israel’s legitimacy through the BDS movement, especially in the US where a large number of Latinos are descended from forcibly converted Jews.However, such benefits are dwarfed by the moral imperative of this historic moment.The window for this opportunity is not unlimited and we must act resolutely and with a united purpose.It is our hope that the Knesset conference will become the stepping-off point for the State of Israel and world Jewry to place the reconnection with the descendants of Spanish and Portuguese Jewish communities at the top of their agenda.Every generation looks back at history, especially one so fraught and turbulent as ours, and tries to ascertain what might have been if something had gone another way or the actors involved had behaved differently.We may not have an opportunity to change history, but we can undo some of its devastating consequences. A shared history, roots and ancestry requires that our two communities, the Bnei Anusim and the Jewish world as a whole, reconnect to partly undo the horrors of a bygone era.The Jewish people has shown by the unprecedented redemption of our ancestral homeland that we are undaunted by history and its consequences. I hope some of that unchecked pioneering spirit will help us in this venture.Robert Ilatov is a member of Knesset, founder and Caucus chairman, and Ashley Perry is Caucus director and president of Reconectar, an organization facilitating a reconnection with the descendants of Spanish and Portuguese Jewish communities.