This Normal Life: Wedding in Cyprus – the modern Zionist irony

It is a shame they had to leave Israel on the very day of our aliya to get married abroad. 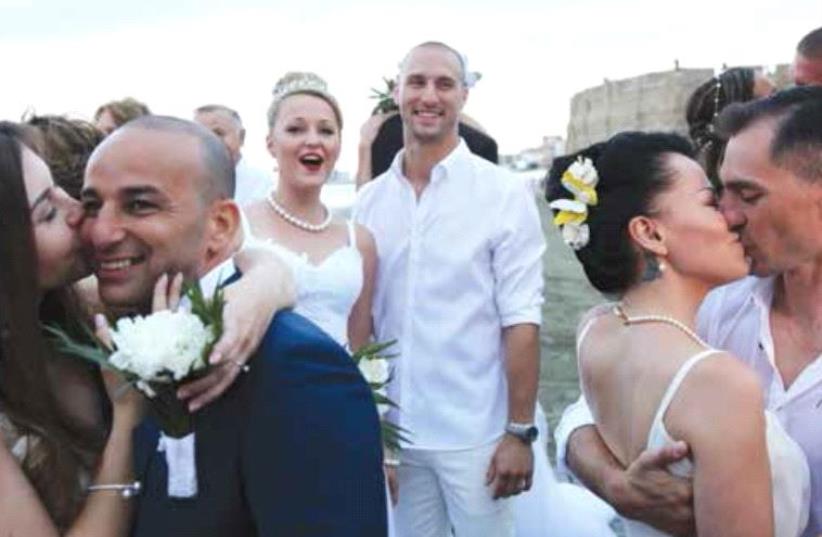 Couples of Russian and Israeli origins kiss during a mass wedding in Larnaca, Cyprus, in June last year
(photo credit: REUTERS)
Advertisement
When my daughter Merav married her high-school sweetheart Gabe last month, the date they set for their wedding just happened to be the 22nd anniversary of our family’s aliya.When we made the decision to move to Israel, one of our greatest hopes was that our children would find nice Jewish Israelis to marry and get hitched in the one and only Jewish state.But our daughter didn’t get married in Israel. In a modern Zionist irony that is in equal parts infuriating and tragic, Merav and Gabe flew to Cyprus where the mayor of Larnaca, the island nation’s third largest city, did the honors at the local city hall.Merav and Gabe didn’t choose Cyprus because they weren’t allowed to marry in Israel. While Israel has no civil marriage system, meaning people of different religions cannot legally wed in the country, both my daughter and her new husband are Jewish according to Halacha (Jewish law).They did it because, as Merav told me, they didn’t want to have anything to do with the Israeli Chief Rabbinate which has exclusivity over Jewish marriage in Israel, and that refuses to allow people to marry in accordance with customs that are not fully Orthodox.In Merav and Gabe’s case that meant having a fully egalitarian ceremony, with a presiding rabbi not on the rabbinate’s officially approved list.Our children are far from alone.Every year, some 20,000 Israelis take advantage of a loophole in the law that states if a couple marries overseas and then presents the documentation to the Israeli Interior Ministry, they will be registered as married. But if they opt for a Jewish ceremony in Israel without going through the rabbinate (and they skip the Cyprus part), their status will remain single.It’s become a full-fledged phenomenon.One out of every five marriages in Israel today now bypasses the rabbinate, in what can only be described as a bottom- up effort to topple the rabbinate’s monopoly on marriage by simply making the institution irrelevant.“The only way to effectively address these problems is through grassroots efforts and mass civil disobedience,” Chuck Davidson, an Orthodox rabbi who regularly performs weddings outside the rabbinate in Israel, told me.Getting married in Cyprus is not that difficult – although it doesn’t come cheap.A couple thinking of getting married overseas can contact any one of several Israeli companies that offer full service wedding packages. (Prague is another popular destination.) For around $2,500, they will book your flight and hotel, arrange your appointment time at City Hall in Larnaca, assemble and manage all the paperwork for you, and even hire a driver and car to get you from the airport to town and back.Merav and Gabe decided to skip the markups and do it on their own. Not surprisingly in this social-media age, there is an abundance of advice online – in Facebook groups dedicated to the subject or on websites like Free-wedding.info or Larnaka.org.cy.They started by going to the Interior Ministry to procure a document that testified they were both single. While the document itself is free, translating it into English and getting it notarized and stamped can run up to $250.That’s more than the flight to Cyprus, which takes less than an hour and can be booked on the Web for just $150 round trip.Once in Larnaca, there are accommodations to fit every budget. You can fly in and out on the same day, though many couples add a night or two to create a mini-vacation.The actual ceremony takes all of seven minutes and costs $350. Weddings are conducted in the mornings only. At that rate, if fully booked, Larnaca is making upwards of $10,000 a day just on weddings.“No one is willing to admit this, but if Israel ever decides to allow civil marriages within its borders, the financial ramifications on the island will be disastrous,” journalist Sarah Stricker wrote several years ago while following a number of Israeli couples marrying in Cyprus.Merav and Gabe’s appointment at City Hall was at 9 a.m. Their official certificate of marriage was ready by 1:30 pm. The couple spent the afternoon on the beach, sipping cocktails and overlooking the blazingly white Cypriot sand.Two weeks after returning from Cyprus, Merav and Gabe had the egalitarian wedding of their dreams in Israel.Both Merav and Gabe signed the ketuba (marriage contract), witnessed by not just two men but two women, and which included language where they mutually committed to each other. They exchanged rings and circled each other under the huppa. Both men and women recited the sheva brachot (the seven wedding blessings).Three days later, they brought their paperwork from Cyprus to the Interior Ministry in Jerusalem and were officially registered as married.Yes, it is a shame they had to leave Israel on the very day of our aliya to get married abroad, but we are so proud of their pioneering spirit and their determination to play a part in a much-needed movement for change and reform.For all of that, let’s wish the happy couple mazal tov! The author is a freelance writer who specializes in technology, startups and the entrepreneurs behind them. More at www.bluminteractivemedia.com.