Tillerson’s past offers few clues on his Middle East perspective

Trump’s choice for secretary of state, an oil man, will come under scrutiny for his broad opposition to sanctions. 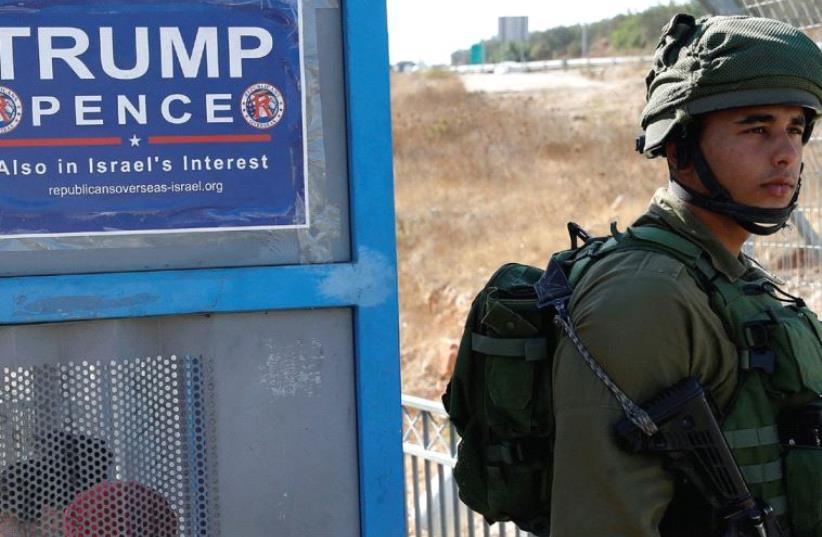 A soldier stands next to a bus stop with a pro-Trump poster near the West Bank Jewish settlement of Ariel
(photo credit: REUTERS)
Advertisement
WASHINGTON – Donald Trump announced on Tuesday that Rex Tillerson, CEO of ExxonMobil, is his choice to lead the State Department, hailing the Texas oil man as an executive who “knows how to manage a global organization and successfully navigate the complex architecture of world affairs and diverse foreign leaders.”A lifelong ExxonMobil employee, Tillerson has no governing or foreign policy experience. Little is known about what personal policy views he has developed over his time at the helm of one of the world’s largest oil companies.But, in that role, he has lobbied against sanctions as an American foreign policy tool and has established a close relationship with Russia’s president, Vladimir Putin, who awarded him the nation’s highest honor to foreign nationals in 2013.In a statement thanking Trump for the nod, Tillerson pledged to “focus on strengthening our alliances, pursuing shared national interests and enhancing the strength, security and sovereignty of the United States.”Trump said one of Tillerson’s highest priorities at the State Department will be to “promote regional stability,” without specifying to which region he was referring.Trump transition officials say Tillerson is well versed in the dynamics of Middle Eastern politics, which he navigated while steering a transnational organization with its own independent foreign policy agenda.But precisely because of the nature of that experience, several Jewish-American groups expressed fear on Tuesday that Tillerson’s close business contacts in the Arab world may have negatively shaped his attitudes toward Israel.“There’s been no evidence thus far, and no public display on his feelings on the US-Israel relationship,” said Ron Halber, executive director of the Jewish Community Relations Council of Greater Washington, the central community relations agency of the organized Jewish community of the US capital. “He may have been conditioned not to view Israel in a positive light, and he has to be strongly questioned so we can ascertain his values on that. There’s evidence that we know of that he does not support sanctions as a tool, and sanctions are what brought the Iranians to the table.”From the right of the political spectrum, the Zionist Organization of America expressed similar concerns.The group’s national president, Morton Klein, told the website Jewish Insider that, “as an oil man, [Tillerson] was obviously very close to many Arab countries and had close relations with them.”“I am worried that this may indicate bias against Israel,” said Klein. “His closeness with Russia concerns me, as well, because Russia has been enormously hostile to Israel.”And from the left, the National Jewish Democratic Council wrote that Tillerson’s selection amounted to Trump “doubling down on his mixed record when it comes to issues the pro-Israel community cares most about.”“At best, Tillerson is an unknown quantity when it comes to Israel,” the NJDC said. “At worst, his affinity for Putin and business dealings with some of Israel’s worse enemies adds to the growing list of fears for supporters of the US-Israel relationship.”But Tillerson’s business contacts in the Arab world do not necessarily correlate with negative views of Israel, argues one former diplomat, who notes that a great friend of the Jewish state – former secretary of state George Shultz – was treated with skepticism by the community during his own confirmation hearings in 1982 over his connection to Bechtel projects in the Gulf.“There was a time that being associated with oil made you automatically deemed hostile when it comes to Israel,” said David Makovsky, director of the Project on the Middle East Peace Process at the Washington Institute for Near East Policy and a senior US government adviser during the 2013-2014 Israeli-Palestinian negotiations. “However, at a time that Israel and Gulf states are quietly pursuing common interests when it comes to enmity towards Iran, the Mideast is no longer zero-sum. Hopefully, oil executives see this shift as much as the Arabs themselves.”Most Jewish-American organizations are choosing to remain silent on the president- elect’s appointments.The American Israel Public Affairs Committee, the American Jewish Committee and the Anti-Defamation League have declined to comment on the selection of Tillerson, or any other cabinet nominee. But one group, J Street, is calling on the Senate to conduct “thorough” confirmation hearings of the potential secretary of state.“J Street urges senators of both parties to thoroughly vet Rex Tillerson’s background and qualifications to serve in this critical office,” the group said in a statement published the day before Tillerson’s selection was announced. “We expect senators to question him vigorously to determine whether his views are consistent with decades of bipartisan US support for a two-state solution to the Israeli-Palestinian conflict and with upholding our country’s international commitments, such as the successful nuclear agreement with Iran.”Confirmation is not assured for Tillerson, as at least four Republican senators are questioning Trump’s choice: Marco Rubio of Florida, Rand Paul of Kentucky, Lindsey Graham of South Carolina and John McCain of Arizona. Tillerson’s failure to secure support from these senators will likely render his nomination dead on arrival.Prime Minister Benjamin Netanyahu weighed in briefly on Trump’s transition efforts on Tuesday, stating only that it would be “great” if the incoming president chose to move the US embassy in Israel from Tel Aviv to Jerusalem.