The poll also found that more than half (53%) of Americans rate Trump's performance during his presidency as "below average," 41% of whom say he was a "terrible president."

By JERUSALEM POST STAFF
Donald Trump and Joe Biden
(photo credit: REUTERS/MIKE SEGAR/CARLOS BARRIA)
Advertisement
A new poll, published on Monday by the Pew Research Center, found that Americans are divided along partisan lines regarding the legacy of former President Donald Trump, over two months after he left office.
The poll found that while 38% of Americans say Trump made progress toward solving major issues, an almost identical 37% say he exacerbated the country's major problems. Some 15% said he tried, but failed, to address the problems, while 10% said he did not address them at all. 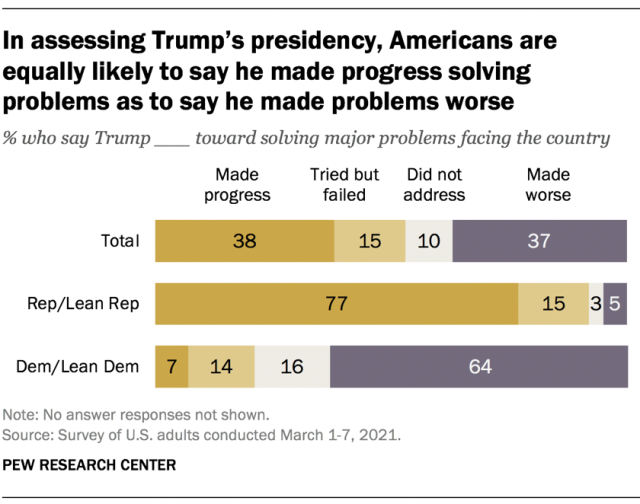 Along party lines, it seems that the democratic disapproval of Trump's legacy outweighs the Republican support for it. The poll found that 89% of Democratic or Democratic-leaning independents said Trump's performance was terrible (72%) or poor (17%), while only around 73% Republican and Republican-leaning independents said it was great (37%) or good (36%).
When compared to previous Pew Research polls, the poll shows very little movement in opinion compared to polls taken throughout his time in office.

However, the poll also found that the partisan divide over his legacy today is more pronounced than it was for past presidents in surveys conducted during the last months of their presidencies, a time when approval ratings are usually known to rise.