Abbas to Africa: No Israel ties without end to military rule

Over the past year, Israel has launched an intensive effort bolster its ties with African states, making inroads in a continent that has long refrained from enhancing such cooperation. 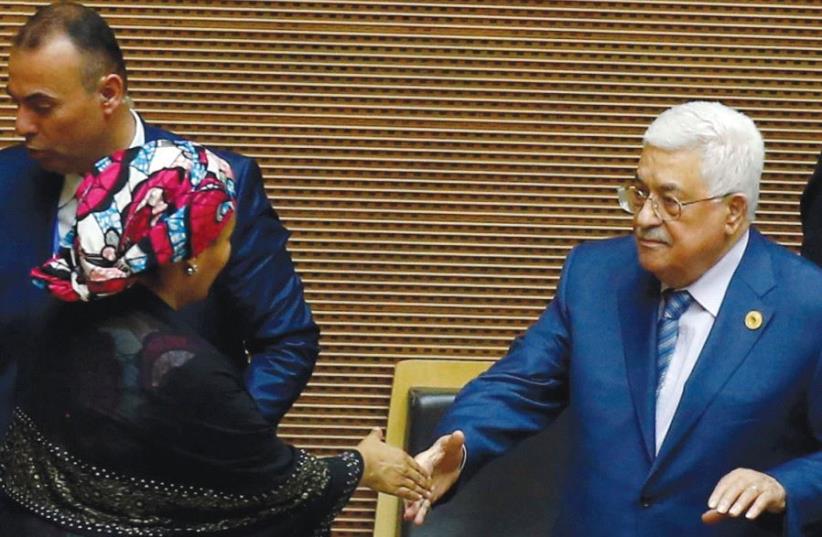 PALESTINIAN AUTHORITY President Mahmoud Abbas (right) is welcomed by UN Deputy Secretary-General Amina Mohammed at African Union headquarters in Addis Ababa yesterday
(photo credit: REUTERS)
Advertisement
Palestinian Authority President Mahmoud Abbas on Monday told African states that improved ties with Israel should be calculated in relation to the Jewish state’s commitment to ceasing its military rule over Palestinian territories.Over the past year, Israel has launched an intensive effort bolster its ties with African states, making inroads in a continent that has long refrained from enhancing such cooperation.“The Israeli state of occupation’s efforts to participate in your regional conferences and organize continental conferences encourages it to continue its arrogance, occupy Palestine and deny the Palestinian people’s rights,” Abbas told the 29th African Union Summit in Addis Ababa, Ethiopia. “We hope that the advancement of the continent’s relationship with Israel is linked to the extent of its commitment to ending the occupation.”
PM Netanyahu meets leaders of seven East African countries
Prime Minister Benjamin Netanyahu made a trip to Africa in July 2016, where he visited a number of African states and met with seven heads of state. The Israeli leader also traveled to Liberia in June to address the Economic Community of West African States summit.Abbas also urged African states to support international efforts to end Israel’s military rule.“We are looking for you to support the end of [this bitter reality]... by turning to international councils and institutions to preserve our national rights and implement the two-state solution,” he said.African states, almost all of which belong to the Non-Aligned Movement, have historically supported the Palestinian leadership in international forums such as the United Nations. However, with increasingly stronger ties to Israel, Abbas fears some of those states will begin to forgo voting in favor of the Palestinian leadership in such bodies.For example, in June 2016, Israel won 103 of 175 votes to be elected to the UN Legal Committee for the first time.In the latter half of his speech, Abbas added that “a new glimmer of hope” is emerging with the “early movement” of US President Donald Trump to make peace between Israelis and Palestinians.“We affirmed to President Trump, in our meetings with him at the White House and in Bethlehem, our complete preparedness to work with him for the sake of a historic peace deal between us and the Israelis in accordance with the two-state solution,” Abbas said.Trump has met individually with Abbas and Netanyahu several times, but it remains unclear how he plans to revive peace talks between the two.According to a US government readout of the last meeting between Abbas and Trump’s senior adviser Jared Kushner, both sides “underscored that forging peace will take time.”