Thousands of PFLP-affiliated demonstrators in the Gaza Strip protested Trump's visit to Bethlehem on Tuesday. 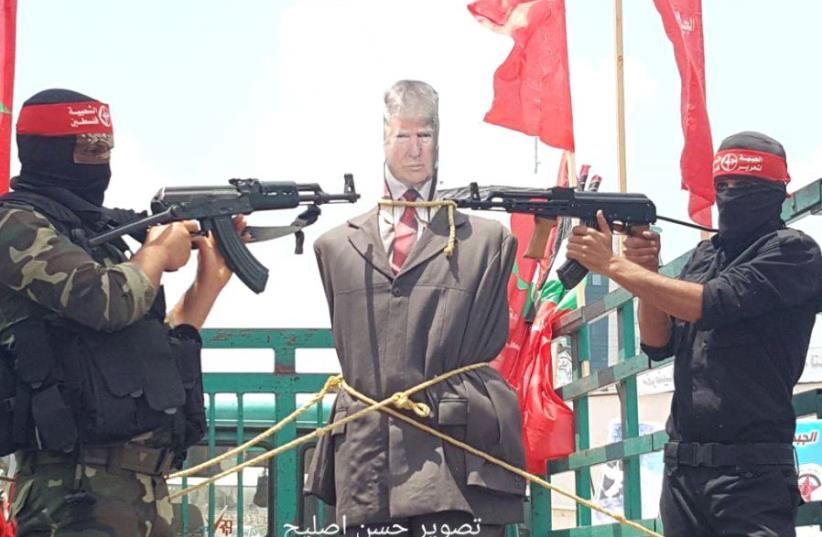 Armed men point machine guns at effigy of Donald Trump in Gaza protest, May 23 2017.
(photo credit: ARAB MEDIA)
Advertisement
Thousands of supporters of the Popular Front for the Liberation of Palestine (PFLP) in Gaza protested US President Donald Trump's visit to Bethlehem on Tuesday, and his statements describing Hamas as a terrorist organization.During the protest, masked men pointed machine guns at an effigy of President Trump, while demonstrators waved Palestinian, PFLP, Hezbollah and Iranian flags and placards expressing criticism against US policy.The PFLP, a designated terror organization by the US, Canada, European Union, Australia and Israel, has been responsible for carrying out dozens of terror attacks since the 1960s.The protest, which started at Gaza City's Palestine Square, culminated at al-Saraya Square in the center of the city, the location of a tent supporting hunger-striking Palestinians detained in Israeli prisons.Kayed El-Ghul, a senior member of the PFLP's political bureau, stated that the protest demonstrates the wish of the Palestinian people to support the hunger-striking prisoners and their demands, in addition to the rejection of Trump's Middle East policy "that we believe will enshrine Israeli conditions," in the peace process."We are sending a message that the Palestinian people will not surrender their rights and that we reject returning to negotiations under the Americans," added El-Ghul. "We are maintaining our struggle to achieve our goals in spite of events in Riyadh."According to El-Gul, "we face the real danger of the elimination of the Palestinian issue. The decisions taken at the Riyadh Summit have turned Israel into a partner and part of the fight against terror - through a policy that itself constitutes terror."