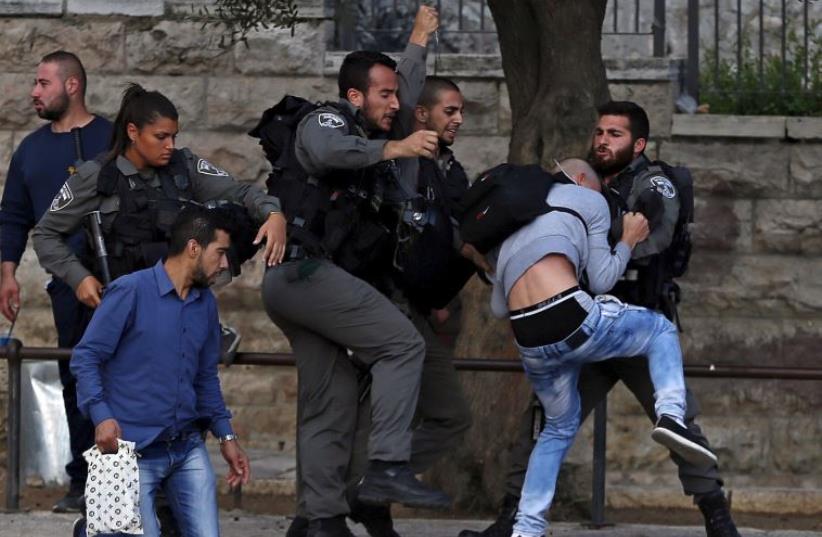 Border Police officers scuffle with a Palestinian protester as they detain him near Damascus Gate outside Jerusalem's Old City
(photo credit: REUTERS)
Advertisement
The security cabinet met for the second straight day on Wednesday to discuss further steps to tamp down the wave of terror - this time focusing on incitement - even as the IDF and police began implementing steps the security cabinet agreed upon on Tuesday.Among those steps were surrounding and, where needed because of security considerations, enforcing a closure of Arab neighborhoods in east Jerusalem. The government heeded the security establishment’s calls, however, and refrained from clamping a total closure on the West Bank.
Israel authorises sealing off East Jerusalem quarters in bid to quell violence
After a marathon meeting, the security cabinet approved the following steps early Wednesday morning: * In addition to the demolition of terrorists' homes, no new construction will be permitted at the site where a terrorist's home was demolished.* The property of terrorists who perpetrate attacks will be confiscated.* The permanent residency rights of terrorists will be revoked.* The operational force of the Israel Police will be enlarged and expanded.* Three hundred additional security guards will be recruited for public transportation in Jerusalem at a cost of NIS 80 million.* IDF units will reinforce the Israeli Police in Israeli cities and along main roads.* The IDF will be instructed to deploy units in sensitive areas along the security fence. Prime Minister Benjamin Netanyahu also directed that staff work be done to complete the security fence, including in the southern Hebron Hills area.Netanyahu visited a Border Patrol base in Jerusalem on Wednesday, and said – after praising the forces for their life-saving actions in recent days and pledging full government support – that there was no alternative to deploying a large number of mobile forces able to quickly respond to any attacker in order to thwart the attack or keeping it from getting worse.He said the police and IDF had full backing from the government and from the country to “act with determination -- first of all to save lives, and also to defend yourselves.”National Infrastructure, Energy and Water Minister Yuval Steinitz, who is a member of the security cabinet, told foreign reporters at a press conference Wednesday that “dramatic times necessitate drastic measures,” but that these steps will be relaxed as calm is restored.Steinitz said that steps such as demolishing the homes of terrorists and not allowing them to be rebuilt at the original site were intended to act as a counterweight to Palestinian incentives – including financial incentives – that were encouraging acts of terrorism .The logic, Steinitz said, was to impress upon the terrorists that “if you destroy the life on another family, it will not bring rewards – not for the terrorist, nor for the people who support or celebrate it.”Foreign Ministry Director General Dore Gold, speaking at the same press conference, dismissed the argument that clamping a closure on some of the neighborhoods of the capital was the beginning of the “re-division of Jerusalem.”“This is nonsense,” Gold said, adding that when similar steps are taken in other cities around the world where there are occasional spurts of violence – such as Prais, Los Angeles and Ferguson, Missouri – it does not mean that the state is giving up its sovereignty over those areas.“Israel will adopt the measures necessary to bring about quiet,” Gold said, adding that those measures will answer standards “fairness.” He said that the moves approved by the security cabinet were “the legitimate instruments of a democracy seeking to defend itself, using proportionality, restrained measures and not changing in any way the status quo on the Temple Mount.”Steinitz sharply responded to criticism that Israel was engaging in “extrajudicial executions” when police or soldiers kill attackers, saying that no one ever accused the French police of carrying out “executions” after they killed terrorists in Paris.Steinitz also took the international media to task for referring to acts of murder carried out by groups like Islamic State or al-Qaida as “brutal acts of terror,” while referring to similar acts against Jews in Israel as an “escalation of violence.”Both Steinitz and Gold attributed the recent wave of terror to incitement, with Steinitz saying that a 13 year old boy does not take a butcher knife and go try to kill Jews because of an “overall analysis of the peace process.”“No,” he said, “this is about hatred and indoctrination to kill the Jews, get rid of the Jews.” He said that Palestinian children were fed this incitement “like their mother's milk,” and that it is coming from Hamas, the northern branch of Israel's Islamic Movement, and “on a daily basis” from the Palestinian educational system and government controlled television.