‘Hamas tries to vanish, but we can see them’ 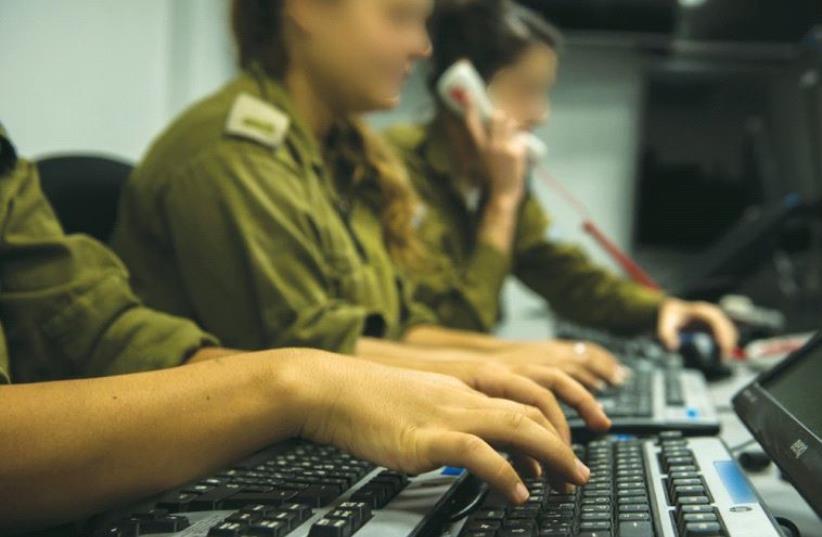 SOLDIERS AT the military’s Fire Control Center monitor enemy activity in the Gaza Strip.
(photo credit: IDF)
Advertisement
On any given day, a strategically vital installation in the IDF’s Southern Command bristles with activity. From here, the military keeps a close watch on the Gaza Strip, and from here, all of Israel’s firepower will be managed in the event of another war with Hamas.In the Strip, Hamas manufactures rockets, digs tunnels and prepares attacks. Israeli “eyes” keep tabs on these preparations.In the Southern Command’s Fire Control Center, screens display real-time visual data, broadcast centers, roads and vehicles of interest in Gaza.Teams made up of the ground forces, air force, navy, Military Intelligence and Shin Bet agents work together, poring over the raw intelligence.Col. Yuval Ben-Dov commands the center. In recent days, he provided The Jerusalem Post with a glimpse into its daily operations. Ben-Dov hails from the Artillery Corps, where he rose through the ranks. He trained reservists at the Ze’elim Ground Forces training center in the Negev, and commanded the Shivta field artillery training center, where units are prepared for the next war.Since August, Ben-Dov has been in charge at the Fire Control Center, spearheading the IDF’s readiness for Hamas.The idea, he said, is to “combine all of the battlefield capabilities into a unified command structure. What you want to achieve is the most important thing, whether you use ground-based or airbased fire power. Each kind brings its own type of advantage on the battlefield, and each kind is suited to certain types of targets.”The center’s role is to facilitate precision-guided strikes during conflict, but to avoid harming noncombatants, Ben-Dov stressed.“The idea is to connect everyone, and to receive the intelligence in real-time,” he said.Even during quiet times such as now, the Fire Control Center remains active, watching the enemy in Gaza around the clock. Ben-Dov expressed hope that the quiet would continue, but added that while it does, the center is continuously gathering intelligence on targets.“We build up the intelligence.We organize, tag and investigate it further. That is our daily work, and part of our preparedness,” he said.Hamas, Islamic Jihad and other combatants are well aware they are being watched.“They are trying to vanish [but] we expose them. Knowing targets ahead of time always helps, though there are some things we will only know in real-time, during battle,” he said.Ben-Dov described the center’s work during the current truce as being part of the IDF’s “war between wars,” the ongoing intelligence-based effort to prevent the nation’s enemies from arming themselves freely. Such efforts “shape the next war,” he said.Hamas in Gaza is an “enemy that learns. It knows our advantages, and its own advantages and disadvantages.It is working very hard to grow stronger,” Ben-Dov said.He said he was saddened to see how Hamas spent all of the Strip’s resources on preparing for war, at the expense of the welfare of Gazan civilians.“Unfortunately, we see them stockpiling weapons and building underground tunnels instead of rebuilding [residential] buildings. Two years after the 2014 conflict, people are still living in the streets. It seems we [Israel] are more interesting to Hamas than Gazans.”The air force “is our trigger,” Ben-Dov said.Shin Bet intelligence agents are completely integrated into the center, and play a part in all of its activities; they are the only ones in civilian clothing.Military Intelligence too is ever-present there.Ultimately, he said, the Fire Control Center greatly reduces the sensor-to-shooter cycle, and even provides the IDF with the ability to “foresee future developments” in some cases.“It seems as if the next war will not be like [2014’s] Operation Protective Edge. And we will face many dilemmas,” Ben-Dov said.