By SAM SOKOL, BEN HARTMAN, JEREMY SHARON
OCTOBER 22, 2015 08:12
Stabbing attack in Beit Shemesh
Advertisement
Two Palestinians stabbed a young ultra-Orthodox man outside a Beit Shemesh synagogue on Thursday morning.Police shot the terrorists, killing one and seriously wounding his accomplice.The 18-year-old victim, whose named has not been released, is in satisfactory condition with stab wounds to his upper body at Jerusalem’s Hadassah-University Medical Center in Ein Kerem.According to eyewitnesses, the pair first attempted to board a school bus on Habakkuk Street in the Ramat Beit Shemesh Gimmel neighborhood, but the driver repelled them. They continued down to Yechezkel Street where they assaulted the young man outside the Kol Yehuda Synagogue, and were subsequently shot at a nearby bus stop.Arabic media named the terrorists as Mekdad Alehih and Mahmoud Ghneimat, both 20, from the town of Surif in the Hebron region. 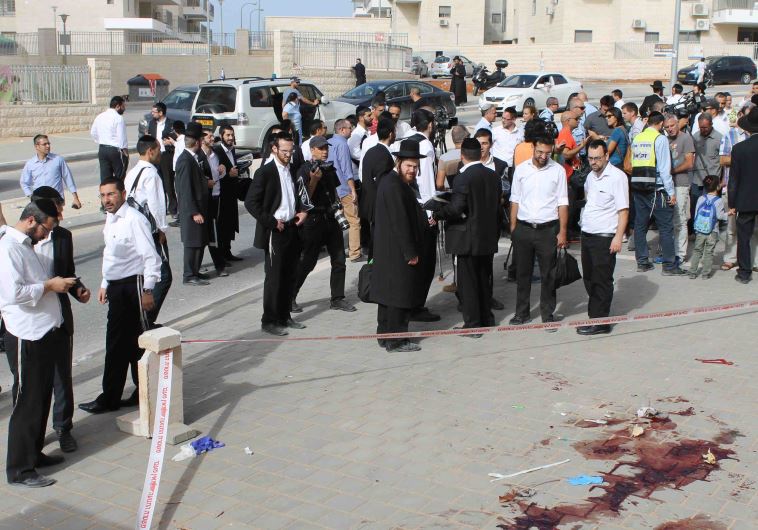 Alehih is a Hamas operative who took part in activities organized by Kutla Islamiya, a Hamas-run student group that propagates Islamist ideology in the West Bank.Ghneimat served time in an Israeli prison in 2012- 2014 after being caught with a knife near the Cave of the Patriarchs in Hebron.Both terrorists wore T-shirts with the logo of the Izzadin Kassam Brigades, Hamas’s military wing.The attack took place around 8 a.m., when many children were boarding their school buses. Many parents stood in the street unsure of what to do following the events.Ruti was passing the scene on a public bus when she noticed two Arabs walking by with “big smiles” plastered across their faces.“A few seconds later I heard shots and jumped on top of my son,” she told The Jerusalem Post, knocking him to the floor and shielding him with her body. “Someone yelled, ‘Get on the floor’ because they thought it was a shooting attack.”Chaim Hazany, 13, was also riding a bus during the attack.“I saw the Arabs and a policeman pull up in a car, go in the middle of the street and shoot. They fell down,” he said.The public bus passengers began demanding that its Arab driver open the door and let them out so they could scatter and hide, Hazany continued. “He said that he would not let anybody off and that he would continue his route.”After one of the passengers physically threatened the driver, he opened the doors and Hazany ran into a nearby building and began knocking on doors, begging for a hiding place, but nobody let him in, he said.“I’m scared to ride on Superbus. Maybe they will stab us. They tried to get on the bus belonging to the Magen Avot School.” 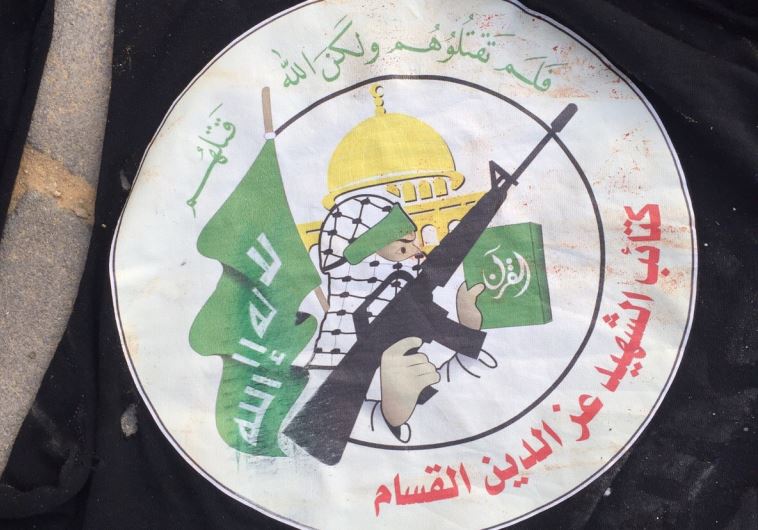 An Izzadin Kassam Brigades shirt worn by one of the assailants. (Photo Courtesy: Israel Police)Standing outside the synagogue, Eli, who was praying during the attack, recalled panic as worshipers crowded into the back room to hide from what was happening outside.“I am happy that God saved us,” he said, as services continued within the house of prayer behind him.Ramat Bet Shemesh Gimmel is a new community still largely under construction and residents voiced worries regarding the high number of Arab laborers and what they believe is an inadequate police presence in the area.Saying that he has not yet had time to process what happened, Akiva Marks, who recently moved there from the more established Ramat Beit Shemesh Alef neighborhood, said that he “wished the authorities had taken intelligent steps in advance instead of reacting after the fact.“Let’s be clear, these guys didn’t just drive in here,” they work in the neighborhood every day, he said. “Is anyone checking Arabs workers to see if they are authorized to be here? Either no or the process doesn’t work. Now they will think about it. Now that there is blood on the floor.”Chana Keren, who was supposed to put her children on their school bus, said that she was grateful at her luck in running late and that she had already made calls to cancel renovations to her house because of anxiety regarding Arab workers.“I don’t need Arabs with knives in my garden. Let’s get some workers from Thailand.We don’t need Arabs.You know what happened in Har Nof,” she said, referring to last year’s attack on a Jerusalem synagogue, when two Arabs for the capital killed four ultra-Orthodox worshipers and a Druse policeman.“There are usually not a lot of cops here. It’s a miracle. It could have been much worse, infinitely worse, if they got on a school bus,” her husband, Shlomo, added.“We are scared to go out,” said one crying woman, standing across the street from the scene of the shooting.“Many of the workers are illegal and the contractors don’t do anything about it,” she asserted. “The laborers sleep in the empty buildings at night.”Beit Shemesh residents expressed concern earlier this week when security guards were removed from two kindergartens in order to man police patrol vehicles in the city. The Beit Shemesh Municipality said this step was taken following advice from the city’s police department and also pointed out that kindergartens are not routinely provided with security guards.Residents also complained that a prefabricated structure designated as a police station in Ramat Beit Shemesh Gimmel had not been manned since it had not been connected to the electricity grid or water supply.Following the attack on Thursday, Beit Shemesh Mayor Moshe Abutbul said that the presence of construction workers in the Gimmel neighborhood had caused disquiet in the city.“We have raised the problem a number of times in emergency meetings with the police, but it was made clear that there is no legal way to stop the work at the construction sites,” said the mayor.“We have allocated a structure for a police station in the neighborhood, I hope that its connection to water and electricity will be completed by the end of the day today,” he continued.Abutbul added that the city would increase security patrols and called on residents to be alert to potential security incidents.According to one bystander, residents, including his sister- in-law, began calling the police to report suspicious activity more than a half hour before the attack without success.Ch.-Supt. Asi Aharoni, the spokesman for the Jerusalem police district, which includes Beit Shemesh, said in response that “when we receive a call about a suspicious person we have to then go out and find them and comb the area until we do.We received the call, a patrol car began searching the area, and were told by civilians [the suspicious person was on] a number of different streets and were also directed by civilians on the street to different areas. It took around 30 minutes to find them and once they did find the suspects, it was the two police officers in the patrol car who charged them, opened fire, and subdued them.”Aharoni noted that while on a typical day the district receives about 120 calls about suspicious persons, over the past few weeks, it has averaged around 1,200 such calls per day.During an emergency city council meeting on Thursday afternoon, Abutbul discussed the possibility of requiring contractors to retain armed guards at their sites. He also said that some city inspectors were being retrained for security work and called upon residents to volunteer to protect kindergartens and other vulnerable places.According to the commander of the city’s police station, patrols around construction sites have been doubled over the past year.In a post on Facebook, City Councilman Moshe Sheetrit called upon residents with gun permits to pitch in and go about their daily lives armed.“As a volunteer in the Border Police, I can attest to the fact that we spend most of our time finding illegal workers and infiltrators in the area,” said resident and former Yesh Atid MK Dov Lipman.“Contractors are breaking the law and are hiring workers without permits. Many even sleep in the construction sites overnight. The city must send inspectors day and night to check these sites and fine the contractors,” he said.Construction work was still continuing unsupervised around the neighborhood following the attack. In a nearby building, volunteer policemen were checking the identity cards of a large group of Arabs standing in the entrance to a hollow shell of a building.Asked for their thoughts about what had happened, the workers stood stony faced until one older man, who appeared to be their foreman, threw out his arms and replied, “There is nothing to say. These things happen.”“It wasn’t at our hands,” another called out.