The suspects directed their attacks against security forces and Jewish civilians in Ras al-Amud near the Mount of Olives cemetery, Shin Bet says. 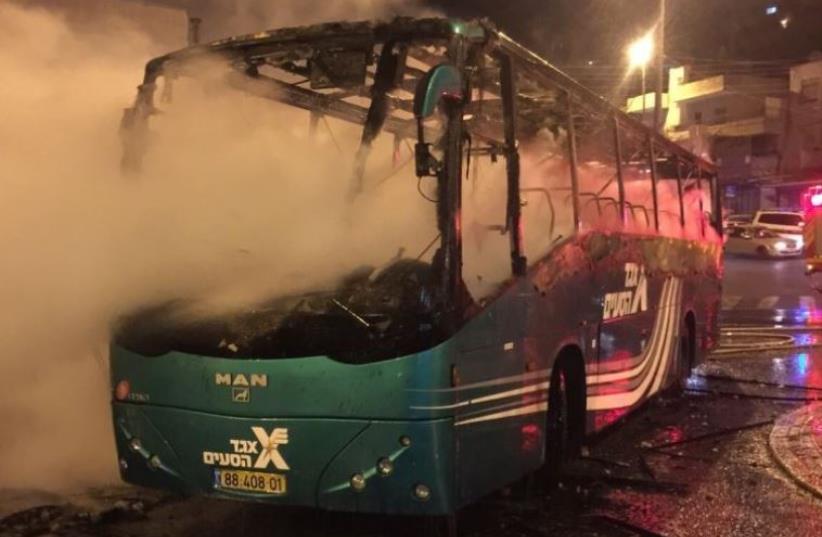 Israeli bus that went up in flames after being struck by a Molotov cocktail in Ras el-Amoud
(photo credit: JERUSALEM FIRE AND RESCUE SERVICES)
Advertisement
Five Palestinian suspects residing in east Jerusalem were arrested for being part of a “grass roots terrorist cell” active in the capital and the West Bank, the Shin Bet (Israel Security Agency) announced on Monday.Following a protracted joint investigation with the police, the Shin Bet said that all the arrests were carried out in the Arab neighborhood of Ras al-Amud in October, but that the ongoing investigation precluded the agency from announcing the operation until recently.According to the authorities, each of the suspects participated in numerous rock, firebomb and fireworks- throwing attacks against Jewish civilians, IDF soldiers and police since September.Three of the suspects have been identified as the brothers Hamza Najjar, 22, and Islam Najjar, 18, and Nader Nasser, 22; the identities of two minors, 16 and 17, cannot be published. 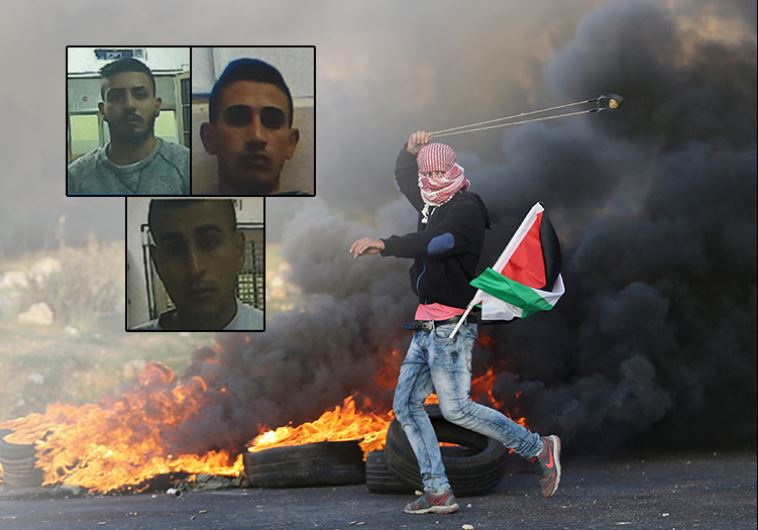 In one instance on September 17, the Shin Bet said, “The interrogations revealed that during riots in the neighborhood, the activists would block the road with garbage cans and cut off the power, in order to draw in police forces and then attack them with firebombs.”The Shin Bet said the two minors also confessed to setting a bus on fire and attacking its driver in Ras al-Amud, as well as throwing rocks and firebombs at security personnel in the West Bank.“In the investigation, they said that the bus driver fled from the scene, and they poured gasoline on the front of the bus and torched it until it burned to the ground,” the statement said.The suspects have been indicted for multiple crimes, including arson, attempted arson, rioting, attempted assault of a police officer, tampering with evidence, intent to commit a crime, as well as other felonies. Several more indictments are expected for other members of the terrorist cell.On Monday afternoon, a 16-yearold Palestinian girl was arrested near the entrance to the Jewish Quarter of Jerusalem’s Old City after police found a knife in her purse.According to police spokesman Micky Rosenfeld, at approximately 4 p.m. several officers stationed in the area noticed the unidentified suspect behaving strangely, and then approached her for questioning.“Police units patrolling the area spotted her acting suspiciously and during a routine search found a knife hidden in her purse,” he said. “She was placed under arrest and taken to the police station in the Old City for questioning.”Rosenfeld noted that she was arrested in an area rife with potential Jewish targets.“If she pulled a knife out she could have stabbed a number of people in the Old City within minutes,” he said. “Police apprehended her before that could happen.”