Six Amona evacuees have been on a hunger strike for 14 days to protest the lack of movement on the issue. 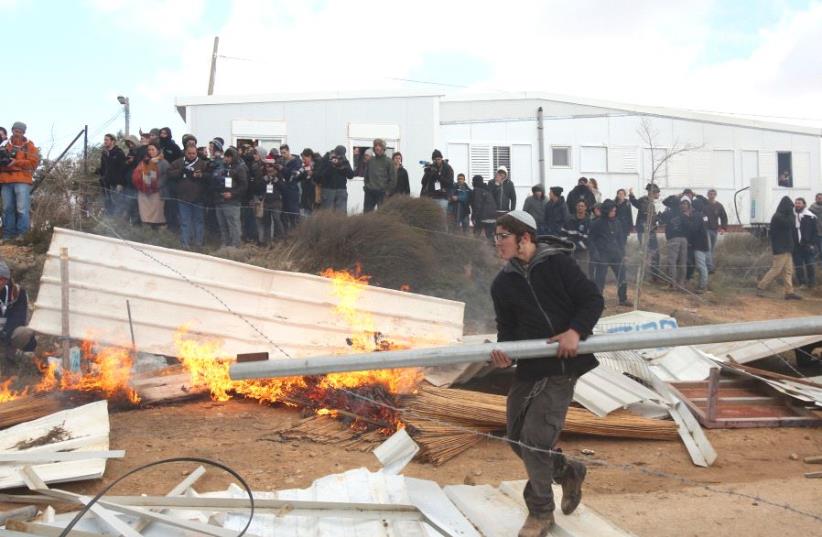 Evacuation of Amona
(photo credit: MARC ISRAEL SELLEM)
Advertisement
Right-wing politicians and activists were not swayed on Wednesday by Prime Minister Benjamin Netanyahu’s pledge to create the first new settlement in 25 years for the 40 families evacuated from the illegal Amona outpost.“To the residents of Amona, I reiterate: I gave you a promise to build a new community and I will honor that commitment,” Netanyahu told the cabinet, which met Thursday instead of its weekly scheduled Sunday time.It's a promise he first made to the Amona families in writing and behind closed doors in December, but which he publicized in February when security forces demolished the outpost.They have waited since then for him to bring the matter to the cabinet for approval, as required by the legislative process. There is some concern that he may attempt to provide them instead with a new neighborhood in an existing settlement rather than create a new one.
Elad Ziv, Amona resident going on hunger strike‏ (credit: TOVAH LAZAROFF)
Agriculture Minister Uri Ariel, who has already written the text for such a cabinet decision, reacted skeptically to Netanyahu on Sunday, stating: “The real test will be actual advancement in the coming days for the creation of a new settlement for the Amona evacuees and the continuation of building in all the settlements in Judea and Samaria.”Six Amona evacuees have been on a hunger strike for 14 days to protest the lack of movement on the issue, a spokesman for the community said. They also have set up a protest tent in front of the Prime Minister’s Residence