PM’s office says the issue of the Arab Peace Initiative was not raised during his talks with the Russian president . 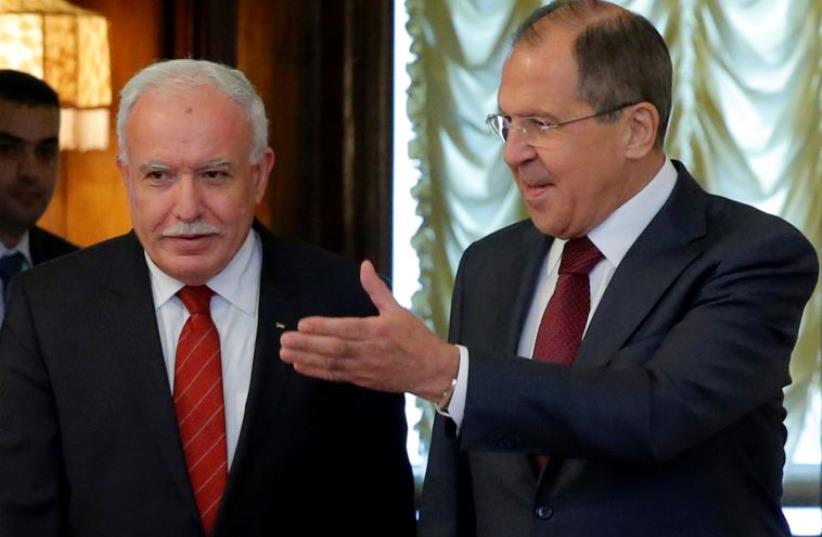 Russian Foreign Minister Sergei Lavrov (R) shows the way to his PA counterpart Riyad al-Maliki during a meeting in Moscow, Russia June 8, 2016.
(photo credit: REUTERS/MAXIM SHEMETOV)
Advertisement
Prime Minister Benjamin Netanyahu did not demand revisions to the 2002 Arab Peace Plan when he met with Russian President Vladimir Putin in the Kremlin, Russian Foreign Minister Sergei Lavrov told reporters in Moscow on Wednesday.“During Mr Putin’s talks with Mr Netanyahu yesterday, Israel made no demands to make amendments to the Arab Peace Initiative,” Lavrov said in a statement his office sent out on Tweeter.It was based on statements Lavrov made during a joint press conference with Palestinian Authority Foreign Minister Riad Maliki.The Arab Peace Plan, also known as the Saudi Initiative offers Israel normalized relations in exchange for a withdrawal to the pre-1967 lines and a resolution to the Palestinian refugee issue.Lavrov’s statement appeared to imply that Netanyahu had accepted the plan, an idea which his office immediately rejected.The Prime Minister’s Office said that the issue of the Arab Peace Initiative was not raised during his talks with Putin and that the prime minister has been clear in the past about the fact that the 2002 plan needed to be revised to account for regional changes. In the last month, to counter French moves to impose a resolution to the Israeli-Palestinian conflict on Israel, Netanyahu has spoken publicly of the need for a regional peace process based on a revised version of the Arab Peace Plan.It is presumed that among the items he would want revised is the issue of a two-state solution on the pre-1967 lines, something he has persistently opposed.Israel considers a withdrawal to the pre-1967 lines to be suicidal from a security perspective.The Arab League, which has endorsed the 2002 plan, has already rejected Netanyahu’s call for revising the plan, as have the Palestinians. Both have insisted that the offer of normalized ties rests on Israel’s acceptance of the original Arab Peace Plan.On Wednesday Russia also rejected Netanyahu’s drive to revise the plan. Russia plays a critical role in the Israeli-Palestinian peace process because it is a member of the Quartet and hold one of five permanent seats on the United Nations Security Council.Lavrov told reporters that the Arab Peace Plan “is integral and embraces the entire set of relations between Israel and the Arab countries, including Palestine of course. There is no need to amend it.”According to a translation of his words by the TASS News Agency Lavrov said that the initial plan was already universally accepted. “Saudi Arabia was the first to forward the initiative, which was later joined by the League of Arab States (LAS) and the entire Organization of Islamic Cooperation,” Lavrov said according to TASS.He explained that the next step necessary to break to move the process forward was a much touted report analyzing the Israeli-Palestinian conflict in an attempt to help renew negotiations that have been frozen for the last two years."Together with partners in the ‘Quartet’ we are preparing now a report with the respective recommendations. We expect that this report will become an important contribution towards efforts on reviving the peace process,” Lavrov said according to TASS.But the report which was supposed to be released last month has been delayed due to disagreements about Quartet members, primarily the United States, about the language in the report.The report “is designed to confirm and update the international legal framework for the Palestinian-Israeli settlement. We hope that our partners in the ‘quartet’ will try to finish the work on this report, especially the recommendations contained in it, as soon as possible," Lavrov said according to TASS.He added that he hoped that moving forward the Quartet would have a larger role in any future peace process.Maliki visited Moscow just as Netanyahu was wrapping up his two-day visit to the Russian capital, his third this year.He was last in Moscow in April. PA President Mahmoud Abbas also visited that month, during which time he met with Putin as well.On Thursday, Jordanian Foreign Minister Nasser Judeh will be in Moscow to meet with Lavrov.