On the boat are several dozen pro-Palestinian activists, among them Israeli Dror Feiler. 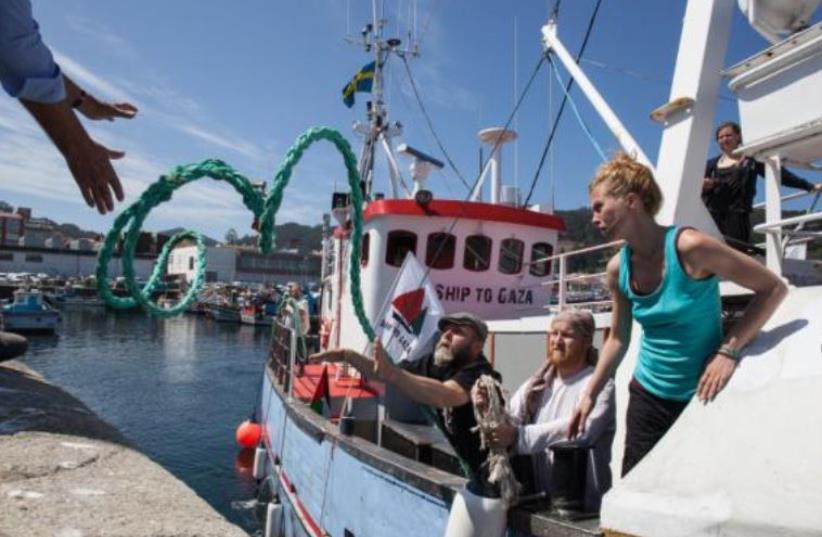 Marianne av Göteborg arrives in Palermo, Sicily.
(photo credit: FREEDOM FLOTILLA COALITION)
Advertisement
Several dozen pro-Palestinian activists Friday headed  out on the Gaza flotilla including the Joint List MK Basel Ghattas: "We are determined to reach Gaza despite Netanyahu's threats.""Hey Gaza, we are on our way,"  Ghattas wrote on his Facebook page on Friday morning from abroad the Swedish ship "Marianne." The ship set sail from Greece despite warnings from the IDF."We are determined to reach our target despite the high seas and despite Netanyahu's threats to have us arrested," added Ghattas. On the boat are several dozen Palestinian activists, amongst them flotilla spokesperson,  Dror Feiler, who renounced his Israeli citizenship 33 years ago.Also on-board the "Marianne" is former Tunisian president, Moncef Marzouki. "Vandals damaged the propellers of the boat intended to be used for the flotilla," said Feiler in an interview with Maariv Online on Thursday. He also said that flotilla activists signed a form declaring they will not use violence in case the IDF tries to come on-board the ship. "We have no weapons, we have no explosives, we will not curse- we won't even spit- but it should be made clear: the Marianne is traveling under the Swedish flag- to board the ship would be a  breach in international law and breaches the sovereignty of Sweden," said Feiler. "I call on the IDF to disobey these clearly illegal orders. If they do breach international law, we will find them and bring them to justice in the future," he added.Feiler also stated that the baggage compartment of the ship is filled with medical supplies and medications. He said "our most important cargo is our message to the world. We ask the world to break the siege on the 1.8 million Gazan living under detention."Feiler called on the IDF not to board the ship. "It does not help, and it does not contribute to Israel's security. We are activists who are committed to non-violence, there is no reason to take over the flotilla except to show that the  neighborhood bully prevails. Let it be clear to the soldiers that if they violate international law, we will disclose their names and issue international arrest warrants."