The UN Statement by the United Nations Special Coordinator for the Middle East Peace Process Nickolay Mladenov said he was “disturbed” by the sudden spike in violence. 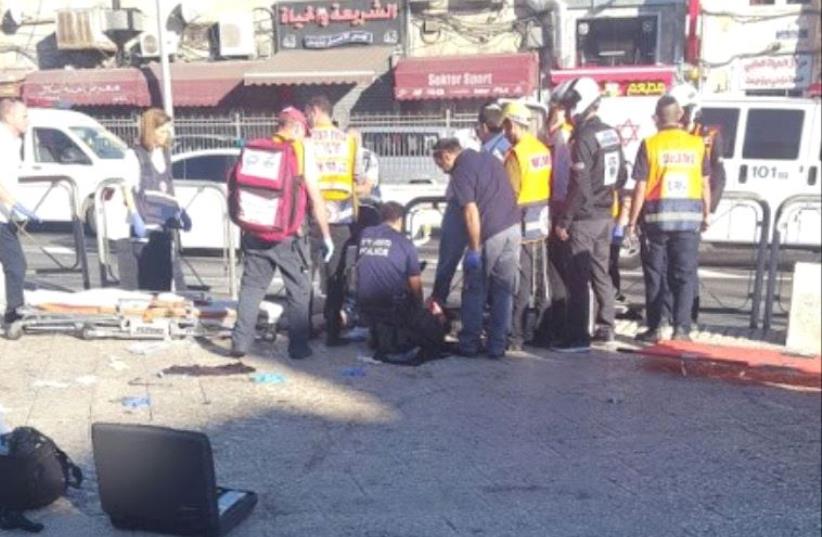 Scene of stabbing attack near Herod's Gate in Jerusalem, September 19, 2016
(photo credit: ZAKA RESCUE AND RECOVERY ORGANIZATION)
Advertisement
A UN official called for Israelis and Palestinians to stem the sudden spike in violence, in which Palestinians executed at least eight attacks in the last four days.“I reiterate the United Nations position that there can be no justification for terrorism and violence. I call upon authorities on both sides to take measures to preserve calm and avoid escalation, especially during the upcoming period of the Jewish High Holy Days,” UN Special Coordinator for the Middle East Peace Process Nickolay Mladenov said.“I am disturbed by the recent violence over the past week," Mladenov said.He spoke after three Border Police officers were wounded in Jerusalem and Hebron by Palestinian assailants. Two of the Palestinian attackers were killed and one was wounded.Early Monday morning, a male and female officer were stabbed from behind and seriously wounded by a terrorist from east Jerusalem, who was shot by Herod’s Gate of Jerusalem’s Old City.The attack follows a thwarted stabbing on Friday by a Jordanian national, who was shot dead a few meters down the road, near Damascus Gate.According to police, Monday’s attack took place shortly after 7 a.m. and was captured on surveillance video.“The terrorist was sitting on a bench, and spotted the two officers when they were walking up the street from the Damascus Gate area toward Herod’s Gate,” said police spokesman Micky Rosenfeld.“As soon as he had the opportunity, he stabbed the male police officer in the back of the neck, and then stabbed the female 38-year-old officer in the back of the neck as well. In the few seconds he had, while the terrorist continued to stab the female officer, the male officer took out his gun and shot him,” he said.Aerial CCTV footage of the attack shows several people running to aid both officers.The female officer was seriously wounded and taken to Shaare Zedek Medical Center for multiple stab wounds to her neck and upper back. The male officer, who is in his 40s, was moderately-to-seriously wounded and taken to Hadassah-University Medical Center in Ein Kerem for treatment.First-responder Magen David Adom paramedic Dudu Hazanovitch said he helped treat the male officer.The terrorist, who is reportedly in his early 20s, is from east Jerusalem’s volatile Ras al-Amud neighborhood, Rosenfeld said. He was also transferred to Hadassah-University Medical Center in Ein Kerem in serious condition, according to the hospital spokeswoman.A Shaare Zedek spokeswoman said the female police officer was unconscious upon arrival, and has been placed on a respirator. The male officer was conscious, a Hadassah official said.Following the numerous attacks over the past four days in Jerusalem and the West Bank, Prime Minister Benjamin Netanyahu has called for heightened security, and police temporarily closed several shops in the Old City to search for other suspects.“Security assessments are continuing in order to deal with the situation,” said Rosenfeld. “There is heightened security there now. There were certain shops near where the attack took place that were temporarily closed in order to deal with the security situation and prevent any further terrorist attacks from taking place.”Interior Security Minister Gilad Erdan, Jerusalem Police District Commander Yoram Halevy and Police Commissioner Roni Alsheikh visited both officers at their bedsides.During the visits, Erdan praised their heroism.“We have police officers and incredible warriors who protect the citizens of Israel with their bodies, and I salute them for that,” he said.“I only pray that they will recover quickly and return to full strength. We are dealing with a vicious enemy who is spreading murderous incitement. 100 years of terrorism has not caused us to surrender, and we will fight and cripple the enemy.”Halevy echoed Erdan’s sentiments, adding that security throughout the capital will remain heightened as the High Holy Days approach.“We – all the Israel Police – are standing behind you,” said Halevy of the wounded officers. “Your determination to fight the terrorist threat, even when you were seriously wounded, saved lives.”Hours later, shortly before 2 p.m., border policemen thwarted an attempted stabbing at the Tomb of the Patriarchs in Hebron.Two young Palestinian men approached a checkpoint near the ancient Herodian structure, which attracts Jewish and Muslims worshipers as well as thousands of tourists, and walked up to the officers guarding the site, arousing suspicion.They ignored calls from the border policemen to stop, and as they drew closer, one of the assailants took out a knife and tried to stab the officers.Officers shot and killed the assailant, and, according to the police spokeswoman, called out to the second man to step aside, away from the line of fire.However, the second assailant also took out a knife, the police spokeswoman said, and the police then shot him as well, seriously wounding him.The second assailant was transported to Jerusalem’s Shaare Zedek Medical Center, where he died of his wounds.One Border Police officer was lightly wounded in the hand during the incident. In a short video clip taken immediately after the attack, an officer can be heard on the telephone reporting to his superior that “one terrorist was killed and is on the ground...Our forces were not harmed, God watched over them,” he said, “thank God, thank God.” The Palestinian Ministry of Health later identified the two Palestinian assailants who were killed as Muhannid Jamil al-Rajabi, 21, and Amir Jamal al-Rajabi, 17.It was the third such stabbing attack against security forces in Hebron. On Friday and Saturday, Palestinian assailants lightly wounded two soldiers in Hebron’s Tel Rumeida neighborhood.On Monday night, a soldier arrested a Palestinian man who attempted to stab him. No one was injured in the incident.