'War with Hamas is only a question of time'

Gaza border area residents fear for the next war with Hamas as they look back on two years since Protective Edge. 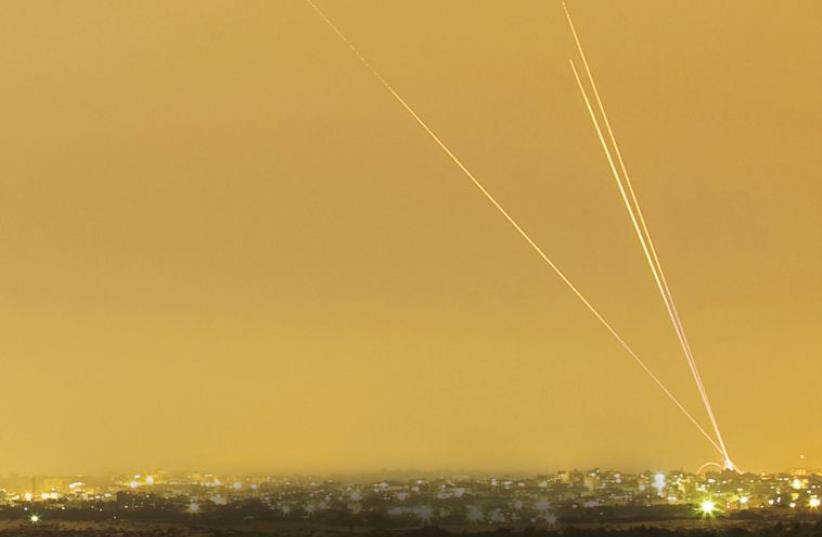 Smoke trails are seen as rockets are launched towards Israel from the northern Gaza Strip
(photo credit: REUTERS)
Advertisement
Mally Pnina Tapiro was sitting in her car when the siren sounded Friday night.“I was dropping off my friends and having a conversation...I was not wearing my shoes and was running like a tiger to the building. After two seconds, I could feel the Kassam is coming.”Then came the screaming noise. “It was awful,” she remembers.After Gaza-based terrorists launched a Kassam on Sderot recently, the air force retaliated, bringing back nightmares of the 2014 war here. Driving to Gaza is a tour of previous battlefields. Yad Mordechai marks the Egyptian invasion in 1948. Near the Kerem Shalom crossing is a memorial to Armored Corps members who fell in 1967. At Kissufim, a sign marks the “Qatif crossing” where in 2005 the evacuees from Gush Katif were withdrawn.Today all the border communities, from Nahal Oz to Mefalsim, have brightly colored rocket shelters at each bus stop.This is part of the “normalizing” of terrorism to which many residents object.“You’re not supposed to live this way. It’s an illusion, the feeling every minute something can happen,” says Tapiro, whose parents arrived in Sderot from Yamit, the Sinai community that was evacuated in 1982 as part of the peace deal with Egypt. She grew up under threat of rockets from Gaza. “We live every day under threat. Any minute it can come. There is no alert.There may be a siren. But it comes from nowhere. People are stressed, always sure something will come.”But life continues. “We won’t stop living just because we fear something will happen.”To help others cope, she wrote a book about living in Sderot under attack.Driving out of the city one passes the two hillocks where journalists and locals watched the war in July 2014. Nightly the rockets fired by Hamas from Beit Hanun and Beit Lahiya could be seen streaking into the sky. Today one of the hills is a construction site.Like all construction here, the development threatens to obscure recent troubling memories.Nearby in Netivot, the Sdot Negev regional council hosts a Resilience Center dedicated to helping PTSD victims.Five other regional trauma treatment centers, located in Sha’ar Hanegev, Eshkol, Hof Ashkelon, Sderot and Sdot Negev, serve those living within 7 kilometers of the Gaza Strip. Leora Alprin, the director, and Judith Spanglet show off their quiet rooms where trauma victims are treated. One has toys for children to play with. Incongruously, the toys include tanks that one can drive around a sandbox. The center was founded eight years ago by the government to aid communities affected by the conflict.Spanglet, who came to Israel in 1971, says that people are often overwhelmed by the volume of noise associated with war. Hearing the Iron Dome warning can trigger some people. “It is about the nervous system that is overwhelmed.”While some veterans, who remember the fedayeen raids of the 1950s, shrug off the long-term trauma, children are especially affected.“It can lead to behavioral issues in school and fears...aggression,” says Spanglet.When the recent Kassam hit, her daughter-in-law said she is worried about a new war.Alprin adds not everyone suffers from PTSD . “Some have symptoms. They have difficult dreams... They might not want to go near an area where a Kassam fell.” Not enough research has been done on the long term affects of living in an environment with artillery fire, mortars, tunnels and Kassams, she says.The tunnel threat especially troubles people here. “They blew up one tunnel and it was so close to the kibbutzim and moshavim, you can’t help but have more stress,” says Spanglet.Jehan Berman, a 35-year-old who immigrated to Israel 15 years ago from Belgium, was wounded by mortar fire in Nir Oz during the 2014 war.Today he lives in the small community of Avshalom near the border with Egypt. He still drives a tractor. “After we finished the last war in Gaza, one month after the end of the war, we [still] heard bombs every night.”Later they heard the ground and their homes shaking, either from tunneling or attempts to destroy Hamas’s tunnels. “We may not be living in a war situation but it is only a question of time for another round. Nothing has changed since. The same people in place, whether Netanyahu or in Gaza, play the same game and we are going to suffer.”