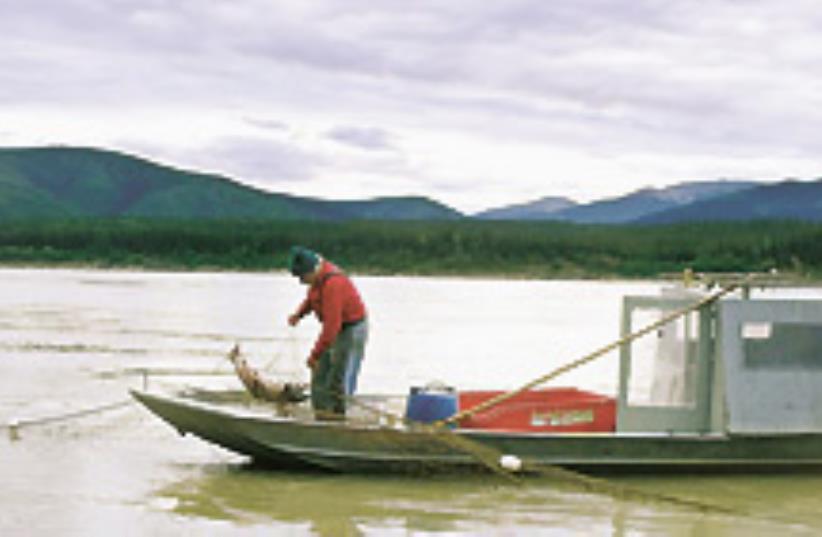 A fisherman pulls in a salmon on the Yukon River.
(photo credit: AP)
Advertisement
Yukon River smokehouses should be filled this summerwith oil-rich strips of king salmon - long used by Alaska Natives as ahigh-energy food to get through the long Alaska winters. But they'remostly empty.
The kings failed to show up, and not just in the Yukon.
One Alaska river after another has been closed to king fishingthis summer because significant numbers of fish failed to return tospawn. The dismally weak return follows weak runs last summer and poorruns in 2007, which also resulted in emergency fishing closures.
"It is going to be a tough winter, no two ways about it," saidLeslie Hunter, a 67-year-old store owner and commercial fisherman fromthe Yup'ik Eskimo village of Marshall in western Alaska.
Federal and state fisheries biologists are looking into the mystery.
King salmon spend years in the Bering Sea before returning asadults to rivers where they were born to spawn and die. Biologistsspeculate that the mostly likely cause was a shift in Pacific Oceancurrents, but food availability, changing river conditions andpredator-prey relationships could be affecting the fish.
People living along the Yukon River think theyknow what is to blame: the pollock fishery. The fishery - America'slargest - removes about one million metric tons of pollock each yearfrom the eastern Bering Sea. Its wholesale value is nearly $1 billion.
King salmon get caught in the huge pollock trawl nets, and thedead kings are counted and most are thrown back into the ocean. Someare donated to the needy.
"We do know for a fact that the pollock fishery is slaughteringwholesale and wiping out the king salmon stocks out there that arecoming into all the major tributaries," said Nick Andrew Jr., executivedirector of the Ohagamuit Traditional Council. "The pollock fishery istaking away our way of living."
Since 2000, the incidental number of king salmon caught hasskyrocketed, reaching over 120,000 kings in 2007. A substantial portionof those fish were bound for western Alaska rivers. If those fish hadlived, an estimated 78,000 adult fish would have returned to riversfrom the Pacific Northwest to Western Alaska.
Efforts to reduce by-catch are not new. In 2006, by-catch ruleswere adopted allowing the pollock fleet to move from areas where lotsof kings were being inadvertently caught, thereby avoiding large-scalefishing closures. Then, 2007 happened, and it was back to the drawingboard.
Last April, the North Pacific Fishery Management Council, theorganization that manages ocean fish, passed a hard cap on the pollockfishery. Beginning in 2011, the portion of the fleet that participatesin the program is allowed 60,000 kings a year. If the cap is reached,the fishery shuts down. Those who don't participate have a lower cap -47,591 fish.
The loss of the kings is devastating village economies. Theseare the same Yukon River villages where spring floods swept away homes,as well as boats, nets and smokehouses. There's no money to buyanything, Andrew said.
"It is crippling the economy in all of the rivers where we depend on commercial fishing for income," he said.
By-catch plays a role but is not the only reason for thevanishing kings, said Diana Stram, a fishery-management plancoordinator at the council.
Herman Savikko, an Alaska Department of Fish and Gamebiologist, agreed. He pointed to changing ocean currents, planktonblooms and even the carnivorous nature of salmon. River conditionscould be changing, too, he said.
A lot isn't known about what happens to king salmon in theocean, Savikko said. "Once the fish enter the marine environment itjust is a big black box," he said.
In a good year, Kwik'pak Fisheries L.L.C. in Emmonak on thelower Yukon employs between 200 and 300 people. This summer, only about30 people have been hired. Kwik'pak is the largest employer in theregion.
General manager Jack Schultheis said when the king fishery wasshut down, the summer chum salmon run was curtailed as well, eventhough a good number of chums were returning to the river.
The lower Yukon villages are economically devastated, he said.
Fishermen used to get between $5 million and $10m. from the fishery. Last year, it was $1.1m.
That means instead of making between $20,000 and $30,000 in the1970s, fishermen are making just a few thousand dollars now, and thatis in villages where fuel costs $8 a gallon, milk is $15 a gallon and aT-bone steak costs $25, he said.
It's hard to see the villages in such economic hardship, butthe Yukon should be managed conservatively until the problem of thedisappearing kings is better understood, Schultheis said.
"For 50 years, it was an extremely stable fishery," he said.