‘Time to be united on issue,’ says Yisrael Beytenu MK. 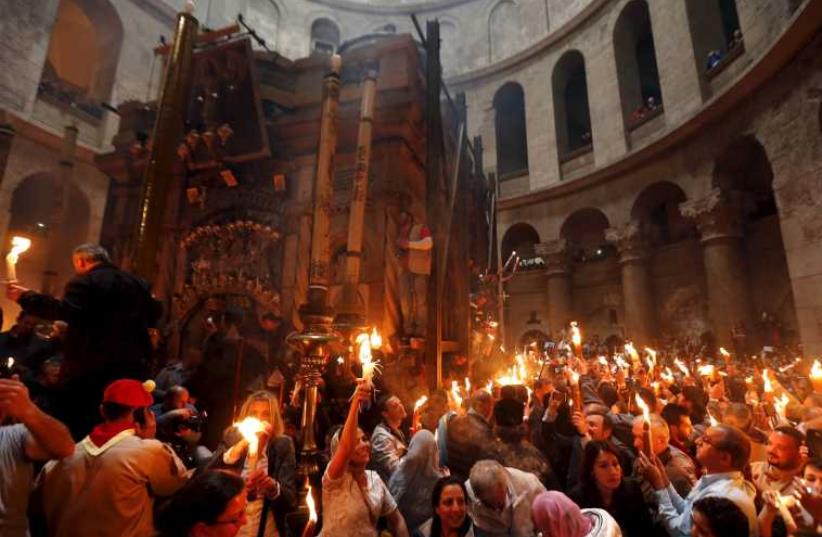 Worshippers hold candles as they take part in the Christian Orthodox Holy Fire ceremony at the Church of the Holy Sepulchre in Jerusalem
(photo credit: REUTERS)
Advertisement
Swedish European Parliament member Lars Adaktusson on Tuesday commended President Reuven Rivlin for inviting a Swedish politician to the podium in the President’s Residence.Adaktusson is one of 200 Christian parliamentarians, clergy and lay leaders from more than 50 countries who have come to Israel on short notice to participate in the Jerusalem Breakfast Initiative.“All of you have come to Israel to pray for the peace of Jerusalem,” said MK Robert Ilatov, president of the Christian Allies Caucus, receiving a murmured chorus of amens in response. Referencing the recent UNESCO resolution that denies the Jewish connection to the Temple Mount, Ilatov said it annuls the Bible.“The time has come to stand united on the issue of Jerusalem,” he said.Adaktusson admitted that anti-Israel sentiment is all too frequent in Sweden and that government policy toward Israel needs improvement.But hostility toward Israel is not isolated to one country, he said, urging his colleagues to address anti-Israel bias wherever it occurs. Too many anti-Israel activists and the media focus on the “occupation” and settlements instead of presenting the full picture of Israel’s achievements he said, as a result of which the European public is under the impression that Israel is responsible for all the problems, and terrorist attacks against Israel have been largely overlooked.Rivlin, a seventh-generation Jerusalemite, asked his guests to not only pray for the peace of Jerusalem, but to pray for peace in Jerusalem.An intelligence officer in the Jerusalem Brigade in 1967, he said he could still feel the emotion that overtook him when he heard the cry “the Temple Mount is in our hands.”The Jerusalem Breakfast Initiative is scheduled for Wednesday morning.
Sign up for our Christian World newsletter >>