The Shfaram neighborhood for Christians and discharged soldiers has the backing of the Prime Minister's Office, but the mayor refuses to go ahead with the project. 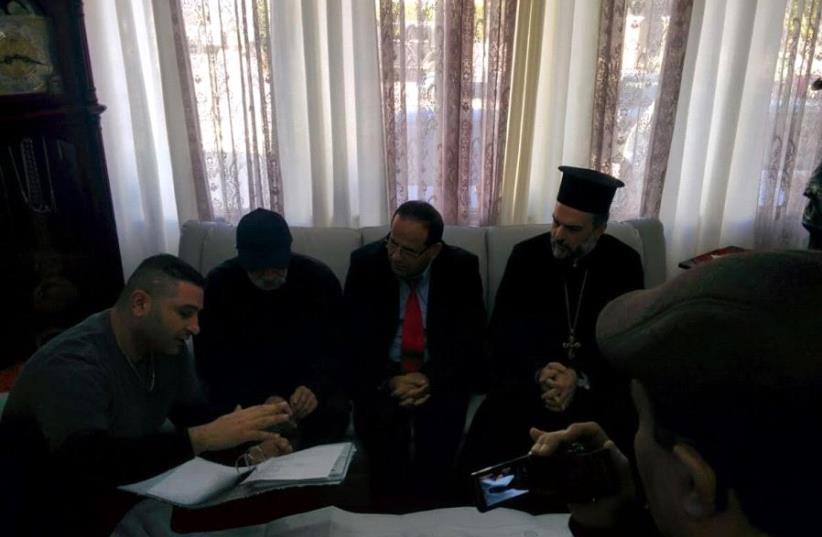 Ala’a Kadado (left) showing Father Gabriel Naddaf and deputy minister Ayoub Kara the plans of the Shfaram neighborhood.
(photo credit: CHRISTIAN EMPOWERMENT COUNCIL)
Advertisement
The mayor of Shfaram is refusing to help Christian-Israeli IDF veterans establish a neighborhood for Christians and discharged soldiers, one of the spokesmen of the community’s project said.  On a tour of Shfaram on Thursday, former soldier Ala’a Kadado, a resident of the majority Muslim city, said Mayor Amin Enbatawi is refusing to hand over the budgets to what would become a new neighborhood designated for Christians and discharged soldiers, spanning an area of 7.5 hectare (19 acres) on the western side of the city. “This plan has already received the approval of the Prime Minister’s Office, and the funds have already been allocated into the municipal budget to build the neighborhood,” Kadado said. “But the mayor is preventing it from letting it happen.”The 34-year-old father of two said a church, school and community center would also be established, which would benefit the new residents and other residents who live near the new community. Shfaram, which once had a Christian majority, is now mainly populated by Muslims. Still, almost 10% of Israel’s entire Christian population lives in the northern city, making it, after Nazareth, the city with the most Christians in the country’s North.Father Gabriel Naddaf of the Christian Empowerment Council and the Israeli Christian Recruitment Forum organized the tour, with Ayoub Kara, the deputy regional cooperation minister, Kamal Badr, the deputy director of the Housing Ministry’s Haifa Region Department, and Yossi Hadad, a Construction Ministry consultant for minority affairs. The veterans had approached Naddaf back in 2003, and the issue still hasn’t been resolved. “The Christian Empowerment Council was established in 2012 to help the Christian community in Israel integrate into the general society, and with the increase in the number of recruits to the army and national service, one can see that this process is succeeding and is in the right direction,” he said. “But the test for the state and local authorities is to do their part in promoting the issue of veteran Christian soldiers being integrated into the workforce in the public sector, [integrating into] higher education and solving problems relating to the principle of affirmative action for discharged soldiers.”Badr of the Housing Ministry said “there is a dispute regarding ownership of these lands,” which is being handled by the Lands Authority. “The authority gave some of these lands to private individuals but there has not yet been an agreement reached in the land registry,” Badr said.Kara said it is imperative to organize a meeting soon with the authority to resolve the issue as soon as possible. “I will speak with [Construction] Minister Yoav Galant, because this is an important issue for him, as is the treatment for discharged soldiers of all faiths.”The Lands Authority ignored all requests for comment sent by Naddaf’s forum, as well as it refusing to meet and tour the area in dispute. Mayor Enbatawi also refused to attend the tour, and refused to comment on the issue.sign up to our newsletter