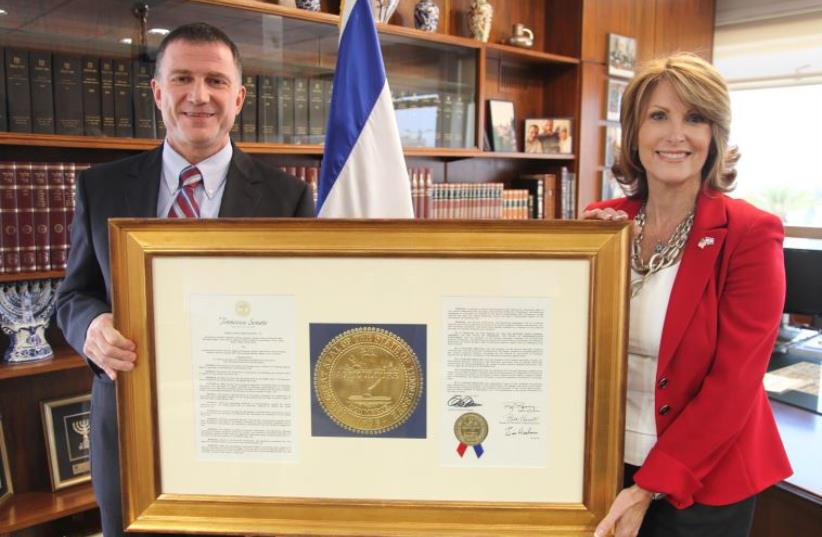 Laurie Cardoza-Moore with Yuli Edelstein at the Knesset recently
(photo credit: Courtesy)
Advertisement
Two major Christian organizations took the fight against anti-Semitism to the UN on Tuesday, in a special forum aiming to shine a light on human rights violations faced by Jewish communities around the world. The forum was held on the 50th anniversary of the Catholic Church's Nostra Aetate decision that relinquished all claims of deicide and called on the Church to combat anti-Semitism.A special emphasis was placed on anti-Semitism within the Christian World in the symposium, led by the Proclaiming Justice to the Nations (PJTN) organization and the World Council of Independent Christian Churches (WCICC). The latter represents over 40 million Christians worldwide.
"The Catholic Church denounced anti-Semitism and deicide five decades ago, yet millions of Christians still believe the heresy of Replacement Theology, believing that the Jewish people are no longer the inheritors of the Covenant and that the Land does not belong to all Israel," said Laurie Cardoza-Moore, President of PJTN and a Special Envoy for WCICC."This is unacceptable and must be condemned in the strongest terms possible," she added, stating that PJTN will continue to "act as a firewall around our Jewish brethren.""'Never again' isn't just an empty statement- it is something that needs to be worked on daily," Cardoza-Morre asserted, telling The Jerusalem Post that further than condemning anti-Semitism, the Catholic Church explicitly said you cannot be a good Christian and an anti-Semite. The forum sought to provide practical advice and data to promote an environment that prevents negative seeds from flourishing, through the vehicles of education, faith and action. Some 13 countries were represented on panels during the one-and-a-half hour long meeting, including Germany, Finland, Italy, Spain, Pana, Cyprus, Israel, Canada and the Vatican.The PJTN presented a recommendation that all these countries should introduce a definition of anti-Semitism, as the US State Department has, to their respective parliaments. "In order to present the issue to the UN, you have to have a foundation to work on," explained Cardoza-Morre, suggesting that alternatively, the countries could adopt the US definition. "We can bring missions together on this and get them and the UN to adopt the definition, and start from there."Cardoza-Morre has scheduled meetings with various ambassadors next month to to get the ball rolling on this project.
sign up to our newsletter