Millions of Christians around the globe join an annual prayer service for peace in the Holy City, following wave of terror attacks on Israelis. 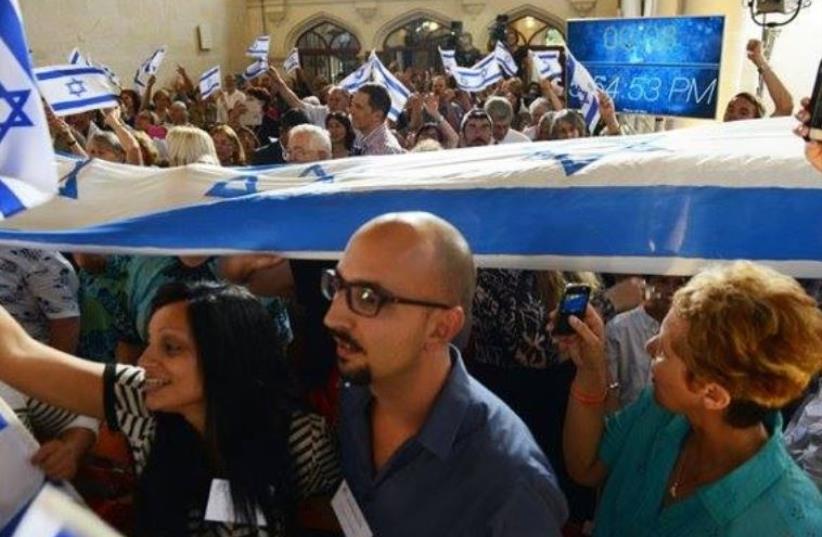 Day of Prayer for Jerusalem, in the Holy City
(photo credit: COURTESY DAY OF PRAYER IN JERUSALE FACEBOOK)
Advertisement
On the heels of the recent wave of terror attacks in Jerusalem and the West Bank, hundreds of Christians gathered in the Christ Church in the Old City on Sunday, to participate in an annual global prayer for Jerusalem - especially pertinent after last weekend when four people were killed in terror attacks. The Day of Prayer for the Peace of Jerusalem (DPPJ) is held every year on the first Sunday of October. According to a DPPJ report on this year's effort, millions of Christians around the world took part in the mass prayer.The event has been organized since 2002 by Evangelical leaders Dr. Jack W. Hayford, Rev. Robert Stearns, and  Dr. Paul Cedar.Christians from over 175 nations ---including seven Muslim countries -- were said to have participated in the prayer meeting, assembling in their churches and homes.The Jerusalem service was hosted by Eagles’ Wings Founder and Executive Director Rev. Robert Stearns, and opened with Pastor Rev. David Pileggi who said that “the very motto of Christ Church since 1830 has been ‘Pray for the Peace of Jerusalem.’”“We pray that as Christian brothers and sisters we no longer can be silent among the nations…bind us together with our Jewish brothers and sisters, for together we are the family of the One True God,” prayed Ken Howard of Christian Friends of Israel. Rev. Dr. Heldt prayed for the four orphans who lost their parents in a West Bank terror attack last week. “Lord, we beseech you to take the place of the children’s parents who were murdered by the hatred of men. We pray for the nations who are full of hatred against Jerusalem; please make their hearts as tender as the heart of Abraham who served you with all his soul.”  People around the world were also able to join the prayer service via an online "virtual prayer room" created by the 24-hour DPPJ Prayer Conference Call. In addition, for the social media savvy, prayer app Instapray offered an alternative method of sending written prayers for Jerusalem. sign up to our newsletter