The French Jewish community is the largest in Europe and the second-largest in the world outside of Israel, numbering nearly half a million Jews. 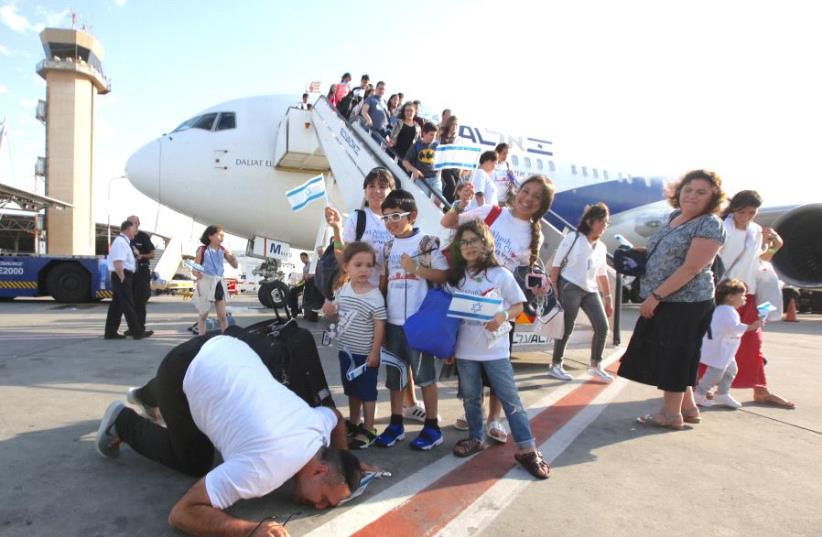 French olim arrive at Ben-Gurion Airport, July 10, 2017.
(photo credit: MARC ISRAEL SELLEM/THE JERUSALEM POST)
Advertisement
Two hundred French immigrants arrived in Israel on Monday aboard the largest aliya flight scheduled to land from Europe this summer.They arrived at a time when government ministries have announced positive developments on issues of employment for French olim from medical fields, which have in the past presented major barriers to their integration here.Immigration and Absorption Minister Sofa Landver hailed the continuation of French immigration as “a Zionist and principled aliya that has contributed and will continue to contribute greatly to the State of Israel.”The Jewish Agency and the Immigration and Absorption Ministry have developed a plan to facilitate aliya from France and to ease French Jewish immigrants’ integration into Israeli society.The plan includes efforts to educate young French Jews on Jewish culture and history and bring them to experience Israel through a variety of programs, to provide French Jews with comprehensive aliya information and counseling, to remove barriers to employment and to increase the number of Jewish Agency shlichim (emissaries) in France.“I am certain that these programs have yielded fruit and have helped French immigrants integrate in various fields: teaching, medicine, hi-tech,” Landver said.“I am aware of the difficulties encountered by immigrants from France and today we are developing, together with the Jewish Agency and other relevant bodies, creative solutions to encourage immigrants from France to immigrate to Israel and to make it easier for immigrants who are already in Israel to move forward in life and integrate quickly into Israeli society,” she added.Immigration from France significantly decreased in 2016, after the country topped the aliya charts in 2015 with almost 8,000 new immigrants. Issues of employment and certification were flagged by French community representatives and aliya officials as the main cause of the decline.Thousands of qualified French nurses have been unable to work in Israel because their certifications were not recognized. Medical students also faced major difficulties because, until last week, the Health Ministry did not recognize French medical degrees because the structure of higher education in France is different from the Anglo-American model followed in Israel.But the situation is now looking up for olim from these fields. Last week, the Health Ministry said it would recognize French medical degrees, and on Sunday, the Ministerial Committee for Legislation approved a bill to automatically recognize medical credentials of immigrants from EU countries.The proposal would apply to doctors, nurses, dentists and pharmacists among others.The French Jewish community is the largest in Europe and the second-largest in the world outside of Israel, numbering nearly half a million Jews.Despite the dip from 2015 to 2016, in general, French immigration to Israel has surged since 2012, breaking records for aliya from western countries. Over 10% of the French Jewish community has immigrated to Israel since the year 2000, half of that in the past five years alone.“Immigrants from France make aliya out of choice and not as an escape: a world of possibilities is open to them and they choose to come to Israel,” Jewish Agency chairman Natan Sharansky said.“Their choice points to the importance of Jewish identity and the sense of belonging that the State of Israel can give to Jews who want to take part in the great Jewish story,” he said. “We must increase efforts to facilitate their professional, educational and personal absorption and to give them a sense of belonging from the moment they step on the soil of the homeland.”The group of olim that arrived Monday includes 74 children and teenagers under the age of 18. The youngest immigrant is two-and-a-half months old, immigrating with her parents and sibling, and the oldest is a 92-year-old widower, who made aliya with his daughter and her husband.