A message from the million Russian-speaking American Jews 490912 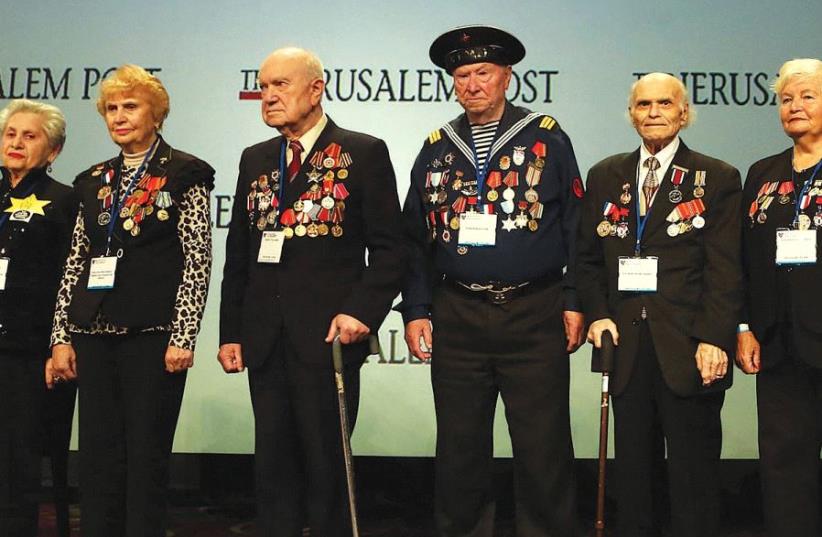 A group of Jewish World War II veterans is awarded a certificate of appreciation by ‘The Jerusalem Post’ and the American Forum of Russian Jewry on May 7, during the sixth annual Jerusalem Post conference in New York
(photo credit: SIVAN FARAG)
Advertisement
This past Monday, May 8, the world marked the anniversary of one of the most meaningful days in modern history, and one of the most important days for the Jewish People and the State of Israel: VE Day, Victory in Europe over Nazi Germany. Without this great victory the State of Israel would not have been established, and the majority of world Jewry, the Jews of Europe and the Soviet Union, as well as the Jews of North Africa and the Land of Israel, could have been eliminated by the Nazi “Final Solution.”

World War II was not only a story of Jewish victimhood

It is also a story of Jewish victory and bravery. Around one and a half million Jews fought in the anti-Nazi coalition. In many cases the percentage of Jews fighting in various national armies was greater than the percentage of Jews among the wider population. Around 500,000 Jewish soldiers fought in the Red Army. Some 120,000 were killed in combat and in the line of duty. The Germans murdered 80,000 as prisoners of war.More than 160,000 earned citations, at all levels of command, with more than 150 specially designated “Heroes of the Soviet Union,” the highest honor awarded to soldiers in the Red Army. Additionally, approximately 550,000 Jewish soldiers fought in the US Armed Forces during World War II. They served on all fronts in Europe and the Pacific. Some 10,000 were killed in combat, and more than 36,000 received citations, while many Jewish soldiers took part in liberating the death camps. Another 100,000 Jews fought in the Polish army against the German invasion. About 30,000 Jews served in the British army, including the Jewish Brigade from Eretz Yisrael.The Victory Day over Nazi Germany is of major significance to the Russian-speaking Jewish community because of their unique personal connection to World War II. Most families have parents or grandparents who fought against the Nazis, as well as family members who were impacted by the Holocaust.On each Victory Day, Jewish World War II veterans wear uniforms, adorned with Red Army medals and shiny insignia, and honor the victory over the Nazi evil. They celebrate and march in Israel, the US, Canada and Europe.One of the most prominent organizations working with the Russian-speaking Jewish community in the US is the American Forum for Israel. Its leaders see their main goal to be strengthening the connection between the Russianspeaking Jewish Diaspora and the State of Israel as well as their integration into Jewish institutions in the Diaspora.During The Jerusalem Post’s annual conference this week in New York, the paper and the American Forum for Israel paid a special tribute to honor the Jewish WWII Red Army veterans and their contribution to the Jewish People and the State of Israel.In 2015, the American Forum achieved a historic success in significantly increasing its representation from Russian-speaking Jewish communities in the US at the World Zionist Congress, the central legislative body, which determines the policy of the leading Zionist organizations.“Today, global Jewry has a unified cause, to stand with Israel as a strong, prosperous and undefeated country,” Dr.

“Only a strong Israel, politically, militarily, economically and spiritually, will be able to provide security for the Jewish People, not only in Israel, but also in the Diaspora.Every Jew in every corner of the world knows that Israel is our insurance, the center of our identity and heritage, our culture and our spirit.”Today, approximately 2.5 million Russian-speaking Jews live in the Diaspora. About 1.5 million of them live in the Western hemisphere, in the US, Canada, Germany, Australia, and in smaller communities like the UK and Austria. These Jews emigrated there during the last 25 years, while more than a million Jews from the former Soviet Union made aliya to Israel.They are firm and vocal in their loyalty and pride for the State of Israel. Israel serves as a basis for their traditionally national, not necessarily religious, Jewish identity. They are deeply convinced that only a strong and victorious Israel will be able to ensure security and a prosperous life for the Jews in the Diaspora, who are constantly facing enormous challenges, like the massive rates of assimilation, the Boycott, Divestment and Sanctions movement and the delegitimization of Israel, diminishing Jewish communities and a weakening of ties between Israel and the Diaspora.Dr. Igor Branovan, president of the American Forum for Israel, adds, “For Russian-speaking Jews in the US, the connection to Israel is the basis of our Jewish identity. This connection is also very personal and there is a very close bond with the Israeli Russian-speaking community, as around 90% of American Russian-speaking Jews have close relatives and friends in Israel. When something bad happens in Israel, it hurts us on a very personal family level.For us, supporting Israel means literally supporting our family and friends.”
A message from the million Russian-speaking American Jews
One of the major supporters of the American Forum for Israel is Michael Gross, a well-known businessman and philanthropist, who was not born in the Soviet Union and does not speak Russian. However, Gross, a Zionist Orthodox Jew, raised in London, deeply understands the need in strengthening Jewish education and a connection to Israel within the Russian-speaking American Jewish community.Michael Gross (Courtesy)“The State of Israel and Jewish organizations worldwide should make an all-out effort to strengthen the connection between Russian-speaking Jews in the Diaspora and the State of Israel. We have a limited amount of time before we face the crucial results of assimilation. Today, when antisemitism and its more politically correct form, the assault on Israel’s legitimacy and BDS, is raising its ugly head again, we ultimately need proud Jews to stand with a strong Israel and Russian-speaking American Jews are doing just that,” Gross said.Gregg Roman, the CEO of the Middle East Forum, which initiated the Israel Victory Project, including the Caucus for Israel Victory in the US Congress, states that it is very important that all the Jews worldwide, in Israel and Diaspora, will celebrate and commemorate the Victory Day over Nazi Germany. “This will strengthen our Jewish victorious spirit and our belief and understanding that Jews and the Jewish State must be strong, military and economically, in order to impose our will on our enemies, and not manage negotiation process of giving up land, which proved to fail again and again,” he said.This article was prepared in cooperation with the American Forum of Russian Jewry