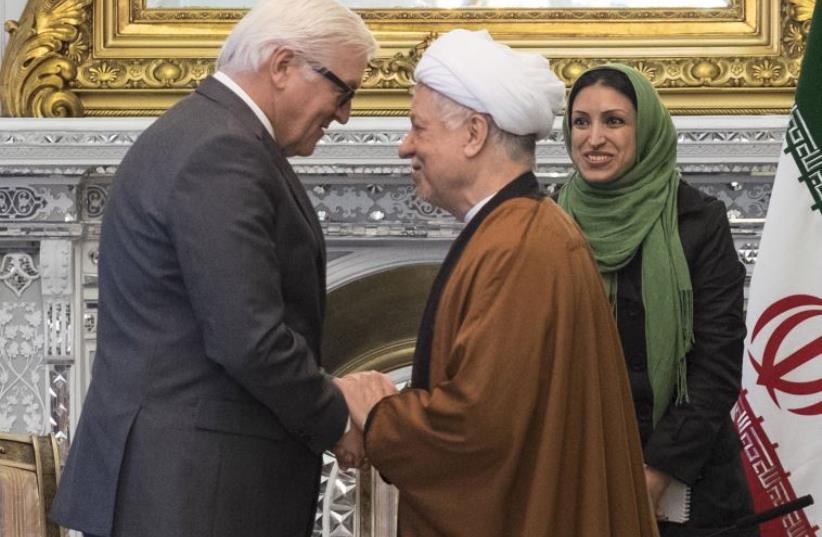 Chairman of Iran's Expediency Council Ali Akbar Hashemi Rafsanjani (R) shakes hands with German Foreign Minister Frank-Walter Steinmeier in Tehran
(photo credit: REUTERS)
Advertisement
BERLIN – German Foreign Minister Frank-Walter Steinmeier’s trip to Iran on Saturday turned the clock back to the Federal Republic’s pre-sanctions pro-Iran policies by showing an indifferent posture to growing Iranian jingoism, domestic repression and anti-Israel rhetoric.“It is of course my wish that Iran uses its influence in the region and… on [Syrian President Bashar)] Assad to ensure that we take the first steps toward a deescalation in Syria,” said Steinmeier, in the second visit by a German foreign minister to Iran in 12 years.Iran’s Deputy Foreign Minister Hossein Amir Abdollahian responded: “We have military advisers in Iraq and Syria at the request of the governments of the two countries...We are going to step up our aid to Syria in the form of advice on the fight against terrorism.”Writing on Spiegel Online Christoph Schult authored a rare German-language criticism of Steinmeier’s Iran diplomacy calling it “too early to term the nuclear deal ‘historic,’” as Steinmeier frequently does.Schult added “it was false to hope that the atomic deal would mark the beginning of a change in Iran. Tehran agitates against Israel and tests new rockets.”He said Iran’s regime’s policies had remained the same, citing “the repression of the opposition, the support for the terror of Hezbollah.” He urged Steinmeier not to shy away from criticizing Iran.The head of Germany’s Human Rights Watch division Wenzel Michalski wrote on Twitter that “Steinmeier should prioritize human rights at his visit in Iran” and linked to a July HRW report containing a laundry list of Iran’s human rights violations.More than 650 people have been hanged this year alone, including several who allegedly committed crimes as children, “ HRW wrote.Iran expert and journalist Amir Taheri took Steinmeier to task for ignoring human rights issues and meeting with anti-Zionist Iranians such as former president Ayatollah Hashemi Rafsanjani, who has discussed the idea of dropping a nuclear bomb on Tel Aviv.Taheri tweeted,”#German FM #Steinmeier can’t be proud. In #Tehran not a pip on #executions, #prisoners of conscience, #hostages, #minorities, #trade unions.”Steinmeier also met with Ali Larijani, the president of Iran’s parliament, who reportedly denied the Holocaust at the Munich 2009 Security Conference and remains committed to Israel’s destruction.Steinmeier did not launch any barbs at Iran’s clerical regime or publicly confront Larijani about his denial of the Shoah.Oddly, Steinmeier has reserved his harshest attacks not for Iran’s regime but for Netanyahu’s criticism of the Iran deal, which the foreign minister deemed to be very “coarse” and urged the prime minister to rein in his rhetoric.Steinmeier’s trip coincided with Sunday’s “adoption day” of the nuclear agreement.The implementation process has started; the EU and US will begin to adopt measures to lift sanctions against Iran for its cooperation in restricting its nuclear program. Steinmeier assured Iran’s rulers that “If Iran fulfills its duties the economic situation will quickly and markedly improve. And that will create room for a strong revival of our economic relations.”His Social Democratic Party colleague, economics minister Sigmar Gabriel, visited Iran in July with a 60-member delegation of the country’s captains of industry to lay the groundwork for flourishing German-Iranian trade.According to data obtained by The Jerusalem Post from Germany’s statistical agency, pre-sanctions bilateral trade amounted to nearly €5 billion in 2010.After powerful EU sanctions were imposed in 2012, German- Iran trade plummeted to €2 billion in 2013. The head of the BDI – Federation of German Industries estimated that post-sanctions exports could climb to more than €10 billion.In the 1980’s, Germany’s policy toward Iran was called “critical dialogue.” There were robust trade relations in exchange for discreet conversations about improving human rights. Steinmeier’s trip seems to suggest he is regressing to this German policy toward Iran.Benjamin Weinthal is fellow for the Foundation for Defense of Democracies.