Agriculture Ministry: Livestock imported from Canada could potentially cause diseases 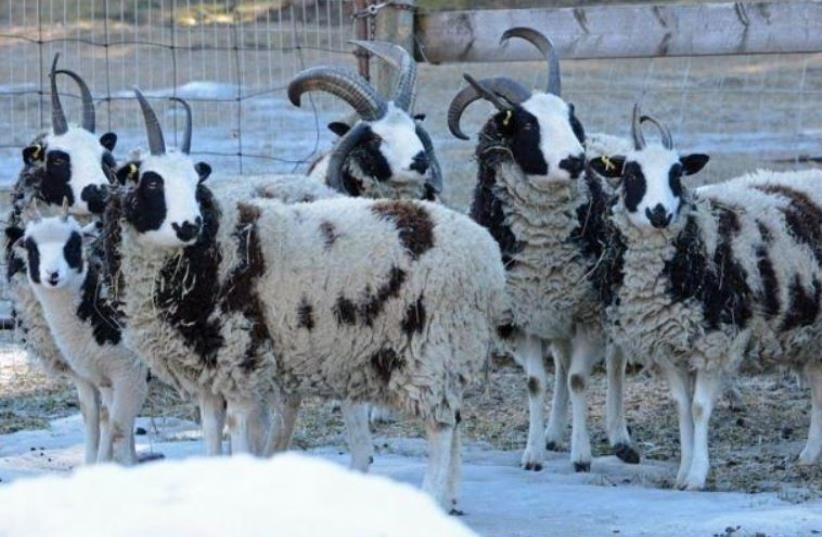 Jacob Sheep
(photo credit: FRIENDS OF THE JACOB SHEEP)
Advertisement
A Jewish Canadian couple is on a mission to shepherd a hefty flock of so-called ‘biblical’ sheep across the world and return them to their native home in the Land of Israel.Gil and Jenna Lewinsky are the proprietors of 80 Jacob sheep, a rare breed of small, piebald (colored with white spots) sheep that commonly have four horns. They are trying to bring the animals from their Vancouver home to where they assume their place of origin was in biblical times. In fact, the Jacob is descended from an ancient Old World breed, and the name is ascribed to the biblical Jacob due to the result of his technique of breeding Laban’s sheep.The Lewinskys and their supporters have launched the Friends of Jacob Sheep organization, through which they intend to establish a heritage park for the sheep in the Golan Heights. Thus far, however, they said they have received no answers from the Israeli Agriculture Ministry regarding their request for an import license.
Biblical Jacob Sheep in Vancouver, Canada
“The Jacob sheep have a very sad story because their numbers are dwindling in Canada,” the couple said. “Israel currently only has Awassi sheep, which originated in the Syrian-Arabian desert. The Jacob sheep are an artifact of ancient Israel and proves that the story of Jacob and Laban took place.”Since then, the couple claimed, the Jacob sheep have made their way with Jacob through Canaan to Egypt, then with the Exodus to portions of North Africa, to Spain via Moorish trade, to England, and then to North America.While England remains home to the bulk of Jacob sheep, the country has performed many “breed improvements” over the past 40 years that have destroyed their heirloom status, the couple said. However, before these “improvements” began, flocks began to arrive in the United States and Canada in the early 20th century, with most in Canada originally belonging to zoos and now to individual farmers, they explained.The Lewinskys said they purchased their sheep about one year ago from a combination of national heritage parks and conservationist farmers.By installing a park for the sheep in the Golan Heights, the husband and wife team said they aim to “put back the ancient sheep to their original use.” The park would serve conservational purposes, also housing a fiber arts program for their wool and educating the public about the importance of the sheep and their connection to the Land of Israel, they said.Despite their inquiries regarding an import license, the Lewinskys said that they have received no reply from the Agriculture Ministry. While there is currently no protocol between Canada and Israel regarding the import of sheep, the couple stressed that such a measure could be formulated swiftly.In response, a spokeswoman for the Agriculture Ministry said that without prior inspection and testing, animals and animal products form other countries are likely to introduce diseases into Israel, with potential morbidity in both humans and animals. Some such diseases introduced in the past have been blue tongue disease and mycoplasma.“Veterinary Services in the Agriculture Ministry goes to great lengths to stop unapproved livestock and animal products from entering in order to prevent diseases,” the spokeswoman said.Importing such products involves thorough examinations in accordance with international procedures published by the World Organization for Animal Health (OIE), according to the spokeswoman. “Even when the product is approved for import, imported animals must remain in quarantine before being released in Israel, to ensure that the country of origin allows not only such imports but also those of that specific animal,” the spokeswoman said. “Canada is not approved as a country from which livestock can be imported, and a risk assessment of its sheep has not been conducted, so it is impossible to grant the request.”