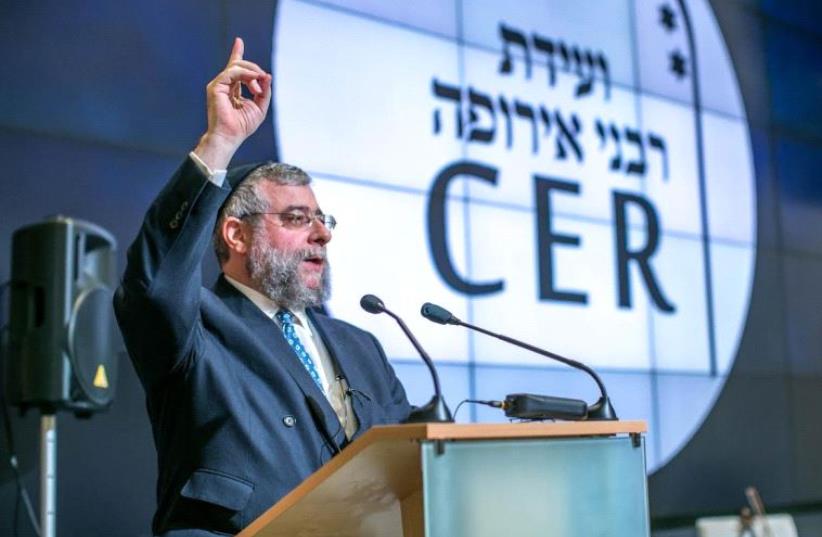 CER President Rabbi Pinchas Goldschmidt
(photo credit: ELI ITIKIN)
Advertisement
The Chief Rabbinate and the Conference of European Rabbis have agreed that rabbis from Israel will not conduct conversions in Europe, while the CER will adopt a policy of non-recognition for converts who convert in Israel through independent, Orthodox rabbinical courts.In 2015, several senior Orthodox rabbis in Israel established a conversion network called Giyur K’halacha, independent of the Chief Rabbinate and the state, to increase rates of conversion primarily among non-Jewish citizens from the former Soviet Union who are descendants of Jews, in order to forestall a rise in intermarriage in coming generations.The Chief Rabbinate has fought fiercely against the initiative and has backed legislation that has not yet been passed which would give it a monopoly over Jewish conversion and revoke rights obtained for Giyur K’halacha through the courts.The Chief Rabbinate has secured the support of the CER, the primary association of Orthodox European rabbis, which will now not recognize any convert from non-state conversion authorities.This includes converts from Giyur K’halacha as well as those done by the haredi (ultra-Orthodox) rabbinical court of Rabbi Nissim Karelitz in Bnei Brak and others.An official in the Chief Rabbinate confirmed the mutual agreement, but insisted it was not a quid pro quo deal but rather a mutual adoption of policies.Rabbis from Israel and the Chief Rabbinate are sometimes involved in performing conversions in European cities which lack a rabbinical court.The agreement between the Chief Rabbinate and the CER will put an end to this practice and will secure CER’s control over Orthodox conversions on the continent.Speaking to The Jerusalem Post, CER president Rabbi Pinchas Goldschmidt said that the agreement was not yet finalized, but that the organization had demanded that conversions in Europe are done “in concert with the European rabbinate,” because “Rabbis parachuted into Europe to do conversions, which sometimes are to do with corruption, are totally detrimental to communal life.”THE RABBI said that non-state conversions performed in Israel would not automatically be accepted by rabbinical courts in Europe.“Every conversion not done under the official Israeli rabbinate will have to go through a checking and vetting process,” said Goldschmidt.“There will not be any automatic acceptance [of non-state converts]. Any such convert will have to appear again in front of a European Bet Din.”The rabbi acknowledged, however, that conversions done by Giyur K’halacha or other non-state Israeli courts might have some halachic validity. He said, therefore, that if there was an instance where a woman who converted through Giyur K’halacha married but subsequently sought a divorce, she would need a valid get, or bill of divorce, before remarrying.“I don’t think it’s a political position. The acceptance of the actual mitzvot [commandments] is an integral part of the conversion process. We should not look at this issue only from Israeli eyes, but also from Diaspora eyes, where lax conversion procedures accelerate assimilation.“Giyur K’halacha and other bodies are coming into Europe and converting there, in France and other places. We know that the standards demanded by Giyur K’halacha are not the standards demanded by us.“We have multiple cases where candidates not accepted by their local European authority arrived in Israel and were issued an express conversion, returning then to their original communities. If the converts who came out of Giyur K’halacha were all Shabbat observant they wouldn’t go there in the first place.”Rabbi Seth Farber, who helped found Giyur K’halacha, was strongly critical of the CER over the deal.He stated that no conversions in Europe at all have been performed under the auspices of Giyur K’halacha, and rejected Goldschmidt’s criticism of its conversion standards.“The overwhelming majority of Giyur K’halacha converts are minors where there is no expectation that they will immediately be Shabbat observant,” said Farber.“It is a well-known halachic norm [according to Jewish religious law] that children under [the age of] bar or bat mitzvah do not need to be fully observant in order to convert.“The essential point is that these conversions are being done in a halachic manner, but are being rejected for political reasons so that CER can better position itself, and this is an absurdity.“Throughout Jewish history, rabbinical courts had deep respect for one another despite their differences. This move is an absolute distortion of all halachic history. If the CER and the rabbinate understood their historic responsibility they would concern themselves with the Jewish future and the integrity of halacha, and not engage in political maneuvers to dismiss halachic converts.”