Israel has young friends in Netherlands

Whether the motive to support Israel is religious, political or just an emotional affinity, it is clear that Israel has many young, promising, passionate and dedicated friends in the Netherlands. 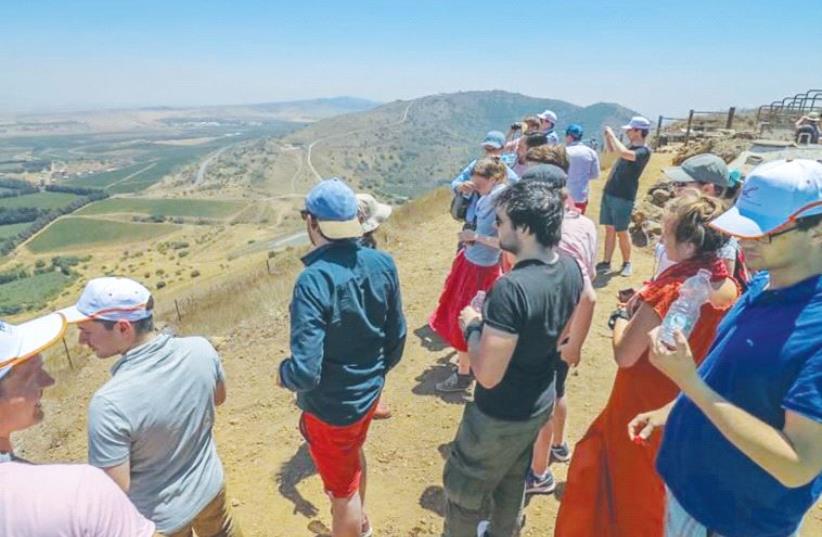 CIJO MISSION PARTICIPANTS view Syria from the Golan Heights, where they heard explosions from the nearby civil war two weeks ago.
(photo credit: Courtesy)
Advertisement
Paul van der Bas, a young Dutch man, traveled from Amsterdam to Israel a couple of weeks ago for the sixth time in recent years. But this trip was special. This time he arrived in the Holy Land as a leader of a mission titled “CIJO Fact-Finding Mission,” involving 23 young people, with co-leader Jonathan de Geus.Van der Bas is a past participant of the 2012 fact-finding mission.The pleasant and articulate 23-year-old Van der Bas is currently completing his Master’s degree in crisis and security management at Leiden University in the Netherlands.He is also the chairman of an association of 120 Dutch students who support Israel called CIJO. It is the youth organization of the Center for Information and Documentation of Israel, the main pro-Israel group in the Netherlands.Like many other members of CIJO, Van der Bas is not Jewish.Yet he feels that despite growing up Christian, he is strongly connected to the Jewish faith. Stating he was always very interested in politics, he vividly remembers how he was strongly influenced by the events of 9/11 and the second intifada.“Growing up I did not know any Jews,” he says, recalling that while attending a Christian school, he learned a lot about the Bible, and specifically about the Israelites. “I guess, as a kid, that did make me curious as to what was going on in the news about Israel,” he said. He also explains his connection to Israel and Judaism as “an emotional kind of intuitive response to what’s going on” that is “hard to explain.”Operation Cast Lead (2008- 9) was a turning point for him, the point at which he started paying more attention to events in Israel. He points to the fact that of the 120 members of CIJO, the ratio between Jews and non-Jews is half and half. “Non-Jews have various reasons to sign up – some are part of other political youth organizations and join because of an interest in Middle East politics. Some sign up after joining a trip to Israel.”Other than organizing events for the members of the group such as lectures, debates and meetings, CIJO reaches out to people who are not necessarily involved with Israel, inviting them to debates or lectures at high schools and universities.“We are also regularly invited to share our opinions in lectures or debates... I was even invited by the Muslim student association where I debated the chair of Students for Justice in Palestine,” he added.Van der Bas made it clear that CIJO has made a conscious choice not to receive funding from any government, Dutch or Israeli. “We’re an independent organization,” he said. “If you want to be a real independent organization, you should not receive any government funding.”The name of the annual “CIJO Fact Finding Mission” is meant to show exactly what the organization tries to accomplish.“The goal of the trip is to show a fair and balanced view of Israel, and also a complete view which is difficult to do in seven days,” he said. “I do believe the overall program shows a very nuanced, balanced and as whole and complete picture as possible.”The 23 young Dutch participants, ranging in age from 18 to 30, come from various political, social and religious backgrounds.What they all share is a desire to learn more about Israel, Middle East geopolitics, the Israeli-Palestinian conflict, and Israeli society. They all hope to be better informed before forming an opinion.The itinerary was packed, including visits to Jerusalem, Tel Aviv, the Golan Heights, Sderot, Netiv Ha’asara, Ramallah and Rawabi, as well as lectures by Israeli and Palestinian officials. On one day, the group met with a settler from Shiloh shortly after meeting Palestinian officials from Fatah and Hamas.“Personally, I do think the facts are in favor of Israel” admits Van der Bas. He said that support for Israel would actually increase by exposing the students to the “facts,” although he stated that he always tries to be as balanced as possible.He spoke passionately about the misconceptions surrounding Israel: “I think there are many misconceptions – some people think that the entire country is a war zone. And people think that the Palestinian territories are a big war zone, which perhaps to a limited extent it is, but on the other hand I think seeing the situation there is the only way to have an informed opinion of what is going on.”Van der Bas discussed the impact of seeing the situation first hand.“We went to Jelazoun, which is a refugee camp, and it is shocking to see, but we also went to Rawabi, which is a sparkling, new, a great city, a Palestinian-built city, which is not something people know about or imagine when they hear about Israel and the Palestinian territories.”The success of CIJO’s mission seems undisputed. All 23 tour participants reported that their perspective on Israel had changed following the visit.Most participants also said they now realize the proximity of the dangers Israel faces at its borders, and have gained a newfound understanding of the security challenges as well as the diversity of Israelis.Whether the motive to support Israel is religious, political or just an emotional affinity, it is clear that Israel has many young, promising, passionate and dedicated friends in the Netherlands.