Mexican Jewish leader in Israel: BDS non-existent in our country

The leader was a part of a Mexican delegation on a 10 day trip in Israel. 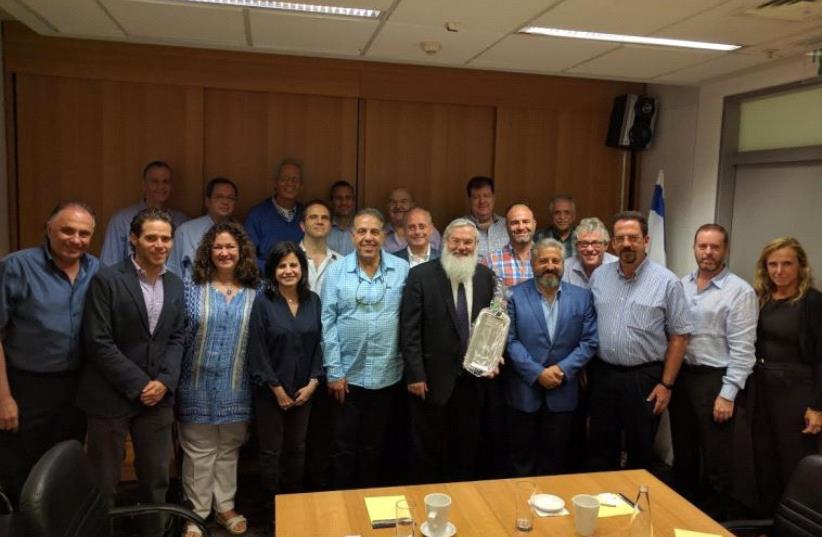 DEPUTY DEFENSE MINISTER Eli Ben-Dahan meets with a delegation of Mexican Jewish leaders.
(photo credit: Courtesy)
Advertisement
BDS is non-existent in Mexico, the president of the country's Jewish community said Monday as a delegation he was leading wrapped up a ten-day visit to Israel. The group consisted of the presidents of Mexico's various Jewish communities, in a trip organized by the umbrella organization of Jewish communities in Mexico, the Central Committee. The Committee president, Salomon Achar, told The Jerusalem Post that Israel has a positive image in Mexico, and that visits such as these, are important in strengthening that.“In Mexico, universities and hospitals and investors don’t know about BDS,” he says. “Instead of BDS, they want student exchanges and academic exchanges, the hospitals wants to have ties with Israeli hospitals - and we bring this to the table every time we meet with somebody else.” Mexico’s Jewish community comprises some 45,000 people, who according to Achar, are extremely unified."We try to come here every few years with Mexico's Jewish leadership, to learn about the innovation here, social demographics, government criterion on different issues, to get in touch with society and to strengthen the bond between Israel and Jews in the Diaspora," he explained. He added that the trip further served as an opportunity to enhance the relationships between Mexico's various Jewish communities in a different environment.The trip featured a variety of tours and meetings, including visits to Hevel Eshkol near the Gaza border, the Golan Heights, Birthright Israel’s Innovation Center in Tel Aviv, as well as to hospitals and universities; "a bit of politics, a bit of social development, a bit of history - an all round visit to understand what is going on here," Achar summed up.He said that the visit helped them better understand how the two countries could work together: “we like to share information between the countries and tighten bonds between us.” At the conclusion of the trip the delegation will update the other members of the Committee back home about what they learned, and will seek to open channels of communication between investors and universities.Achar stressed that the community has very strong ties with Israel, and is supportive of the state of Israel as whole, without taking a stance on the incumbent government. “We are concerned about the success of projects in Israel, because it also protects Diaspora communities around the world.”The delegation also visited holy sites of Jerusalem, met with Israeli businessmen and received a security briefing delivered by Deputy Defense Minister Rabbi Eli Ben-Dahan (Bayit Yehudi) at the Kirya military headquarters in Tel Aviv. Dahan addressed Israel's handling of both domestic and international terror threats. He described the security situation in Israel as “very good,” and said “the IDF protects all the borders and is prepared for any event ."This meeting followed a May trip to Mexico by the Israeli minister, during which he met with members of the Jewish community who sought to strengthen diplomatic and economic ties between the two countries, and particularly cooperation in the fields of technology, agriculture and security. During the meeting in Tel Aviv, Dahan also spoke of the importance of strengthening the connection between Israel and Mexico, which he hailed as "a key country in the world economy and in Latin America in particular." According to diplomatic sources, Prime Minister Benjamin Netanyahu is in talks about a visit to Mexico to meet with President Enrique Peña Nieto.